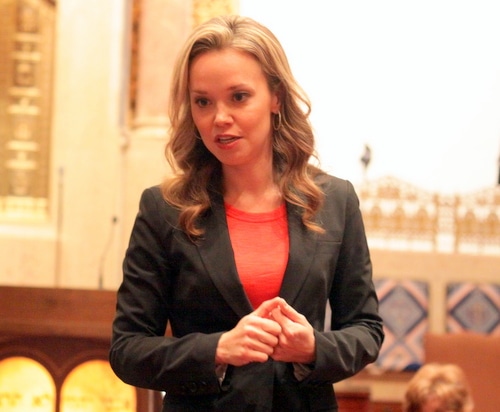 City Council President Helena Moreno said Wednesday (April 14) that she is proud of New Orleanians’ response to the smart decisions of the city’s public health leaders during the pandemic. “I think we showed that we can adapt and follow the science and, by doing so, we can manage an emergency and save lives,” Moreno said in an exclusive interview that touched on a wide range of topics. “We’re coming out of this not because of what elected officials did, but because of the tenaciousness and grit of New Orleanians.”

The past year has been “heartbreaking and grueling,” she said. “To get through it and emerge from the pandemic, we’ve had to come together and lift each other up.”  That has meant supporting the public health responses like masking and restricting in-person contact, as well as now increasing the pace of vaccinations.

“Much of what science told us we had to ask of New Orleanians was unprecedented.  Yet the people of this city responded and took us from the red zone to one of the leaders in virus suppression and now vaccination,” Moreno continued.

She expects that the pandemic will encourage government leaders to properly prioritize public health. “This will help raise the standard of living for so many in our community. Becoming healthy as a community is good for all of us,” she said.

With the city beginning to rebound from COVID-19, Moreno believes getting people back to work is the next priority. “First and foremost, we’ve moved public safety personnel off of furloughs and restored their overtime so that response times can improve,” she said, “and we can have more first-responders on the streets to address emergencies.”

Moreno also wants to ensure the city’s public servants — the ones who do the hard work of making the wheels of government turn — return to their normal schedules so that permits and documentation, customer service and quality-of-life enforcement can ramp back up.

“We must get people back to work. To do so, we need to stand our small businesses back up by cutting red tape and providing direct assistance through fee waivers and permit extensions,” she said. Moreno also supports the creation of an assistance fund directly for local businesses so they can “keep the lights on” until customers return.

Moreno is advocating for smart long-term investments in the city’s decaying infrastructure.  Some of those investments include solving generational problems like the power supply at Sewerage & Water Board, building public broadband to provide citywide universal access, and accelerating New Orleans’ transition to a “more sustainable city prepared for the climate changes that are now on the horizon.”

Since Moreno became chair of the council’s Utilities Committee, she has radically shifted the dynamic between the city and Entergy. “We ended the era of go-along and get-along and instead aggressively held Entergy accountable while speeding our transition to a renewable and carbon-free future,” Moreno said.

“We’ve fined Entergy New Orleans more than $6 million so far for their failures; set high new standards for reliability, which have vastly decreased the number of ‘clear day’ outages; lowered rates by lowering their profit margin 20% and added 100 megawatts of solar generation, which increased our carbon-free energy sourcing to more than 60%,” Moreno said. “We also set a requirement that Entergy end carbon emissions by 2050, the only such standard in the Gulf South and a faster transition to carbon zero than almost any other territory in the country.”

Moreno singled out the expansion of the  City Council’s in-house Utilities Office, which has added lawyers, engineers and support staff and reportedly saved New Orleanians more than $1 million last year in regulatory costs.  Going forward, she proposes to make more improvements and cost savings. “We’re not done yet,” Moreno exclaimed.

She is also planning to revive the citywide parcel-fee concept. Moreno led the charge to create the new fee for tax-exempt properties because all property owners need and use city services. But, due to the state constitutional exemptions, only some property owners actually pay the bill.  “To create more equity and fairness, we have to expand our revenue base. A targeted and well-designed parcel fee can help bring currently tax-free properties back into the fold,” she explained.

Moreno said the work of the City Council task force created to provide feedback on the design of such a fee was beginning to bear fruit when COVID struck last winter. “I’m hopeful we can re-engage with the process and get a final model sometime this year in order to place on the ballot in the near future.” Due to the pandemic and the fact that work paused on this project last spring, Moreno doesn’t think the proposal will make the ballot deadlines for the fall of 2021.

With the 2021 hurricane season just around the corner, Moreno also spoke about emergency preparedness. “Our emergency management team here at the city works hard all year round to make sure we’re prepared.  It’s an excellent team and I’m confident in their abilities.”  Like many citizens, she is concerned about the Sewerage & Water Board’s power supply. Yet she has confidence in the utility’s project timeline, which projects the power supply will be “in better shape” by late spring.

Moreno is pleased to have helped lead a process to transform the power supply at the Sewerage & Water Board by coordinating a collaboration with Entergy which will lead to the construction of a long-awaited substation at the Carrollton plant.  This project would allow S&WB to run its pumping operations off of Entergy power at a lower cost while finally freeing citizens “from the reliability nightmare of their aging power generation infrastructure.”

Moreno is also urging that police resources be re-allocated. “First we need to best utilize our police resources,” Moreno said. She is continuing work to decriminalize marijuana possession so that police time “isn’t wasted” on such “low level” offenses. “This is a positive for public safety, and it is a major reform step to correct disparities in enforcement with almost 90% of possession summons and arrests being Black people,” she said.

Moreno believes city leaders must also “delve deep” into systemic issues that increase the level of incarceration in New Orleans. That effort includes providing adequate mental health and substance abuse treatment.  Moreno is currently working with advocates to develop a model for crisis mental health response that will lessen the burden of response by the New Orleans Police Department.

“Furthermore, I truly believe that another major effort to reduce violence begins with ensuring we reduce trauma and violence in the home. That’s why for years I have focused my efforts on preventing domestic violence,” she said.

Moreno thinks major improvements are still necessary at Sewerage & Water Board. While she believes there has been “some positive signs” from the current leadership, including bringing in new management and finally moving forward on automated metering and a power generation transformation, Moreno is still “consistently frustrated” by what she calls “the basic stuff.”

She points to billing systems that still don’t work correctly, customer service that can leave people hanging, the lack of notification for water shut-offs and repairs and repair work that “drags on and blocks streets” for weeks. “I know many people at SWBNO are working hard to fix some of the legacy of challenges, but progress cannot some soon enough,”  she said.

Moreno also pointed to a positive development. “Through collaborative work between the mayor’s team, the council, the legislature and the Governor’s Office, we may soon be able to solve the power generation issue at SWB that has plagued the city for decades,” she beamed.

Moreno admits that New Orleans infrastructure still “needs a lot of work.” She is hopeful that the city will be tackling some of these problems “with greater speed” because of funding from the Joint Infrastructure Recovery Request procured through FEMA for repairs to undersurface damage after Hurricane Katrina, and other federal assistance that may come in the next year.

However, while the infrastructure projects are greatly needed, Moreno believes a much better job must be done managing the contractors.  “Too many neighborhoods throughout our city are seeing projects linger, without progress, for weeks or months. Now we know a lot of work is being done and these projects are sprawling but we need to also balance the quality of daily life for our residents.” Moreno is confident that a partnership with the administration, which includes greater accountability and better oversight, could push more of these projects toward completion.

Moreno also supports the removal of the Claiborne Avenue overpass. “Plans drafted back during the last mayoral administration noted a path forward that would restore the historic Claiborne corridor and rebuild that center of African-American businesses and civic life destroyed by the imposition of the highway. With the support of the new Biden administration, this project looks more realistic than ever,” Moreno said.

Among her accomplishments, Moreno specifically referenced how regulation of the city’s power utility has shifted.  Some citizens have told Moreno this is the first time in 40 years that the Council has actually held Entergy accountable and taken bold steps to protect ratepayers and take strong climate action.

“I’m also proud of the work we’ve done to make New Orleans a more equitable city. Whether it was making sure city employees are paid equally regardless of gender or passing the CROWN  [Create a Respectful and Open World for Natural Hair] Act to end discrimination against Black women just because of their hair style, we’ve fought hard to make New Orleans a fairer and more just place for all our people.”

Gov. John Bel Edwards and Mayor LaToya Cantrell are co-chairing a Zoom fundraiser for Moreno this evening.  Like all municipal officials, Moreno is up for re-election later this year.