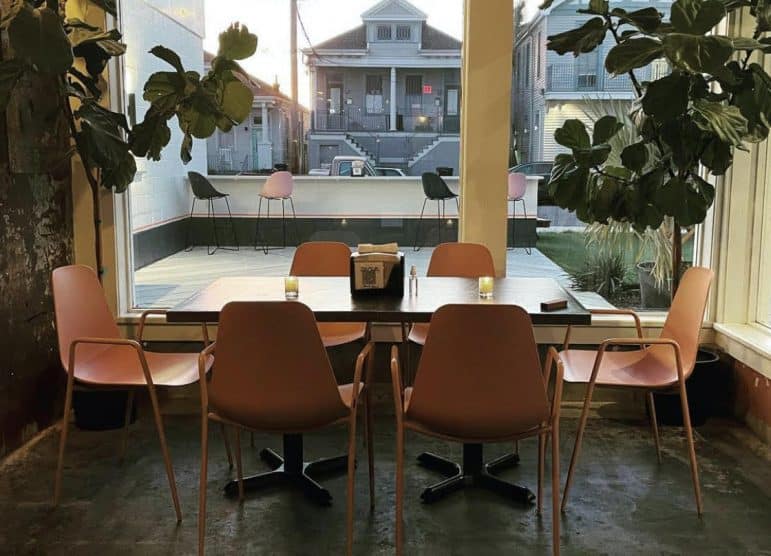 Vals opened as a restaurant in the summer of 2020. It serves Latin American food with a focus on Mexican flavors and traditions.

Last summer, in the midst of the pandemic, the team behind Cure opened a restaurant in a building many New Orleanians remember as a gas station and as the Freret Service Station.

Vals, at Freret and Valence streets, serves Latin American food with a focus on Mexican flavors. It is the latest member of the CureCo family, which includes the nearby Cure and Cane & Table in the Quarter.

Vals didn’t just come together over night. Owned by partners Neal Bodenheimer, Turk Dietrich, Matthew Kohnke and chef Alfredo Nogueira, the project was five years in the making. Dietrich and Nogueira saw the vacant service station and wanted to make it into something worthwhile. 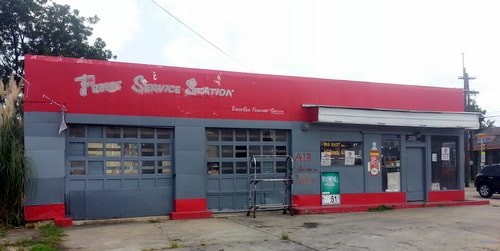 They took food inspiration from their travels and brought it to Vals. “It was inspired by multiple trips to Mexico that Fredo (Nogueira) and I took over the years,” partner Turk Dietrich said.

“It was also inspired from just staring at the property, over the last decade, while working at Cure. (We imagined) what it would be like to turn the space into a lively patio and bar hangout for the neighborhood,” Dietrich continued. “We spent multiple years trying to secure the location, and during that time we did tons of brainstorming, research and game planning for the project.” 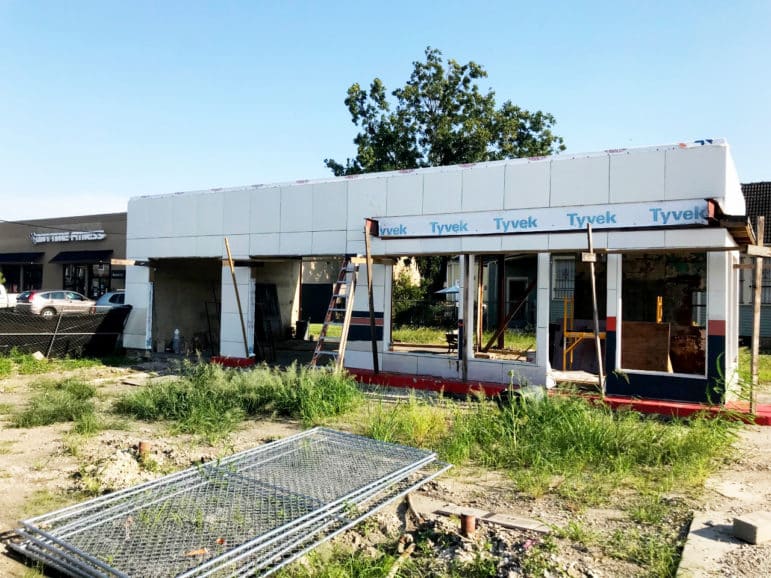 Renovation work is in progress at the old Freret Service Center at 4632 Freret St. in September 2019.

As for opening during the pandemic, the team didn’t hesitate, mainly because they didn’t have a choice. With plenty of patio seating, Vals fits well — even if by complete happenstance — into a time of socially distanced outdoor dining.

“In being forced to open when we did, we were able to offer a huge outdoor space, which can be hard to find in the Uptown area,” Dietrich said. “Distanced, outdoor seating is at a premium in the Covid era, and we were very lucky to be able to offer that to the community during a trying time.”

The team originally envisioned Vals as equal parts bar and restaurant. Due to Covid-19 restrictions, however, the bar couldn’t be utilized when it opened. Vals operated as only a restaurant in 2020, and the hope is to eventually fully realize the owners’ original vision for the space.

“One positive about opening during the pandemic was that it allowed us to grow the bar and restaurant slowly, phase by phase,” Dietrich said. “If we had opened in normal times, I feel like it could have been pretty chaotic with the amount of seating and space that we have available.”

They’ve been able add to the bar service at a leisurely pace as the city’s safety restrictions loosen.

“We’ve slowly been able to add some seating at the bar, with the hopes of it, one day, functioning like a bar in pre-Covid times, with people seated and standing,” Dietrich said. 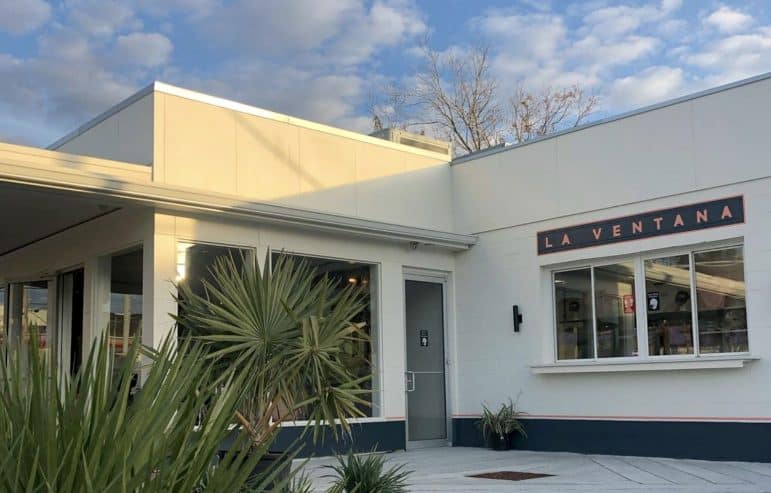 During renovations, the team knew that they wanted to keep the feel of the service station, while updating it with a restaurant vibe. They added their own touches and expansions. With plenty of seating outside, Vals is made for spring days and cocktails.

“For our renovation, we kept the basic structure completely intact, and the original structure now contains the entrance and the bar room,” Dietrich explained. “Two garage doors open directly into our bar room and then, behind the bar, we have our dining room, which has 16 tables.

“We added to the original infrastructure to create both our dining room and the kitchen, and we put a major focus on creating a huge patio that feels a bit more tropical than most spaces in New Orleans,” he continued. “The goal was for people to come here and feel transported — or at least to feel like they can escape the city for a few hours.” 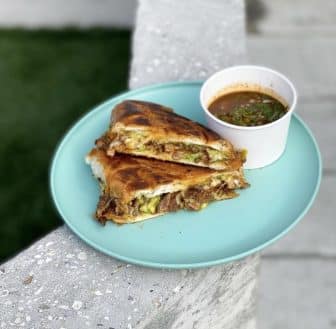 Vals serves up ceviche, snacks and tacos, such as Crispy Beef Belly, Carnitas Pork Shoulder, Chicken in Green Mole and Fried Fish. There are also regular specials. Nogueira keeps the menu authentic, and backs it with research he did while traveling.

“Chef Fredo spent over a year in Mexico doing research and becoming more intimate with the culture and cuisine,” Dietrich said. “Our kitchen makes corn tortillas in-house, for the tacos, and we have a selection of seafood options like Tuna Tostadas and Shrimp Ceviche, in addition to other classics like elotes (grilled corn on the cob), beans and guacamole.”

He added: “My current favorite food options are the Tuna Tostada, the Shrimp Ceviche and the Fish Taco. I eat them on a daily basis and I have yet to get tired of them. Chef usually makes a daily special, and it’s always out of sight; some of my favorite recurring specials are the Oyster Taco and the Scallop Ceviche.” 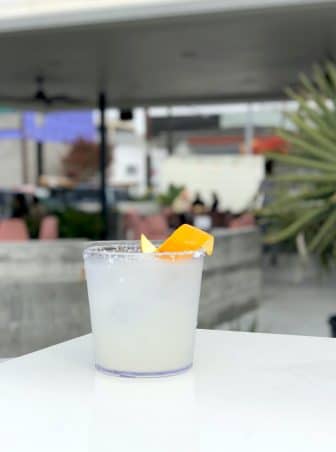 The cocktails at Vals are not to be overlooked. The common thread between Vals and Cure is the care that goes into crafting the perfect drink.

The restaurant offers an assortment of classic Mexican cocktails such as the Margarita, Frozen Margarita (including a classic flavor and a daily special), Palomas, El Diablo and Oaxacan plus an Old Fashioned, Mezcal Negroni and some house originals. Drinks are made with fruit that is juiced daily in-house.

“A lot of people in New Orleans only know Mexican food to be in the Tex-Mex tradition where the portion sizes tend to be much larger,” he said. “A lot of places serve a single Margarita in a giant 20-ounce glass, because they’re using store-bought sour mix as opposed to fresh juice. I’m not knocking that approach; we just offer something different from that model, which means we are hoping to change people’s perceptions just a little.”

Editor’s note: Due to an editing error, an earlier version of this story erroneously stated the Vals partners purchased 4632 Freret in 2019. The Vals group leases the building.