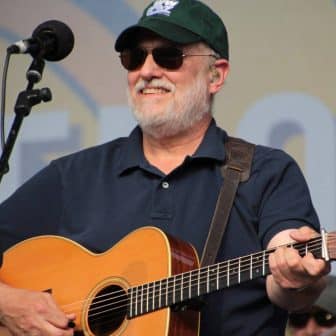 The last live show for musician David Doucet, a longtime Uptown resident, was March 8, 2020, at The Dakota in Minneapolis, playing with Cajun band BeauSoleil.

David, guitarist for the Grammy-awarded band, is widely credited with transforming the acoustic guitar into an important voice of southwest Louisiana’s signature music.

The younger brother of Cajun fiddler Michael Doucet, the Touro area resident has used his distinctive hybrid of fingerpicking and flatpicking guitar playing to enhance the performances of BeauSoleil, the band he and his brother have performed in since the mid-1970s.

In 1991, David Doucet launched his own solo debut with the release of the album “Quand J’ai Parti.” David is bilingual, having learned French from his parents and grandparents, who luckily still spoke the language.

In addition to the upwards of 100 shows a year he played with BeauSoleil, he and banjo and fiddle player Al Tharp had a regular Monday night performance at The Columns.

Local fans still talk about how, in 2009, BeauSoleil won a Grammy for Best Zydeco or Cajun Music album “Live at the 2008 New Orleans Jazz & Heritage Festival” on Sunday, and the next night Doucet was back at The Columns performing for his loyal fans.

His last Columns gig was in February 2020, Doucet said. 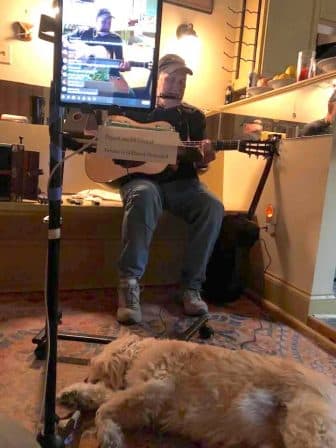 David Doucet plays his weekly Facebook Live gig with Butternut at his feet.

“I have learned how to ‘go live’ on Facebook. That was a major leap of faith!” he said. “I never thought that doing a weekly show would be so interesting.”

Those virtual concerts have been “amazing,” he said. There is a group of fans who log on every week, and they have all have become friends. They request songs, and David has gotten some to play along on the kazoo. Always on the scene is his dog, Butternut Doucet.

Like most musicians, Doucet has had to adjust to the sudden loss of income.  “I did get a couple of COVID related grants. I applied to several ones and only a couple of them came through” he said. “Several organizations, like the NEA and the NEH have been helpful, but mainly MusicCares and the Jazz Fest organization [New Orleans Jazz & Heritage Foundation] have been the most rewarding.”

Doucet took up the guitar, strangely enough, after breaking his arm while practicing with his high school football team in Lafayette.

“Looking for some ways to make my arm feel stronger, I picked up Michael’s guitar and started to play,” he said. “Thank God it was in tune, as I knew next to nothing about music, much less how to tune a guitar.”

Initially he was self-taught by listening to Bob Dylan and Paul Simon, but it was the finger style and flatpicking of Doc Watson that really fascinated him. With his brother Michael and Raoul Breaux, he started playing in music clubs and, shortly thereafter, BeauSoleil was formed.

During his Columns performances, Doucet would switch off between guitar and accordion. Although David is modest about his accordion playing, his fans see him as accomplished.

“I just wanted to learn. I’m still learning, after 40-plus years. It’s not really my instrument,” he said.

David first moved to New Orleans to work at the 1984 world’s fair. With experience as a music programmer, photographer and announcer, he had plenty to contribute. And when the fair ran into financial difficulty, the Arts Council in New Orleans paid him to play “a lot of sets” at the fair in addition to his regular duties.

BeauSoleil was just beginning to tour. “Nothing regular. We played mostly in Louisiana, with occasional trips out of state, like the Prairie Home Companion in St. Paul, New York and Chicago,” he said. “We also were playing yearly in Europe for about three years, then that died. We got an agent in 1987 or ‘88. Then we started working like all get out.”

David has made New Orleans his home ever since world fair days, always living Uptown. The day he moved into his first place, he recounted: “These two old ladies who were renters on the same property asked me who my grandmother was. When I said ‘Lucille LeBlanc,’ they told me they had gone to Touro Nursing School together in, say, 1920.

“Ever since then I decided I had to live in the shadow of Touro Infirmary,” he said. “I still do.”

The current touring schedule for BeauSoleil has been pushed back to the fall of 2021 and into 2022.

“I hope festivals will come back,” he said. “It’s hard to imagine, however, being with a large group of people after this COVID period. I think it’ll be hard to get back to ‘normal.’ Once the risks are diminished, I’m sure things will return to some sense of normalcy, but it will take a long time. But most people I know are positive and happy to get the vaccine.”

Whether the duo will continue their Monday gig at The Columns remains to be seen.