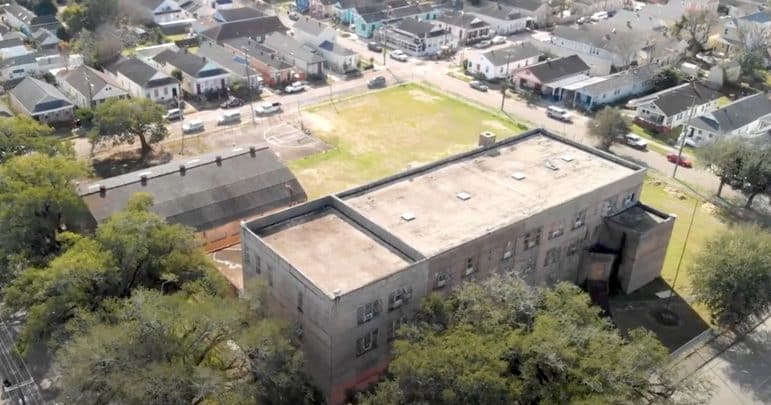 A screenshot from a video on the Lycee Francais website gives an aerial view of the campus bounded by Green, Leonidas, Birch and Joliet streets.

That is expected to change in the 2022-23 school year, when Lycée Français de la Nouvelle-Orléans opens the renovated historic building as its new high school.

The public French immersion school has been slowly expanding its presence in the Pigeon Town section of Carrollton. It is currently leasing the former James Weldon Johnson school building a few blocks away at 1800 Monroe St. and the former Ronald G. McNair Elementary School at 1607 S. Carrollton Ave.

The 10-year-old charter school made a firm commitment to the area in 2015, when it purchased the square block that includes the dilapidated Priestley classroom and gymnasium buildings. Those buildings last hosted students in 1993.

By the time the Priestley campus opens its doors again in 2022, it will be home to Lycée Français’ inaugural 12th grade class, making it the nation’s first tuition-free pre-K through 12th-grade French curriculum program.

The road to Pigeon Town

In announcing the Priestley purchase in May 2015, then-CEO Keith Bartlett stated: “We look forward to being an integral part of the fabric of Pension Town and to all the possibilities the future holds for us all.”

Becoming a part of the surrounding Carrollton neighborhood, referred to as P-Town and known as both Pigeon Town and Pension Town, has been a stated priority for Lycée Français officials as the school continues to expand, adding a grade a year.

The move to the historically working-class neighborhood hasn’t always been smooth.

In 2017, some parents objected to sending their children to the Johnson campus, citing crime in the area. The school’s youngest students are still at its longtime campus on Patton Street near Audubon Park.

Auctioned off by the Orleans Parish School Board in the post-Katrina reorganization, the Priestley campus was long-abandoned and already moldering when the storm hit and levees failed in 2005.

By 2008, an Orleans Parish School Board report stated: “The facility has extensive damage and most is beyond repair.”

According to a 2012 assessment conducted by Waggoner & Ball Architects for the Recovery School District: “Both structures are in very poor condition from years of deferred maintenance and more recent vandalism.” 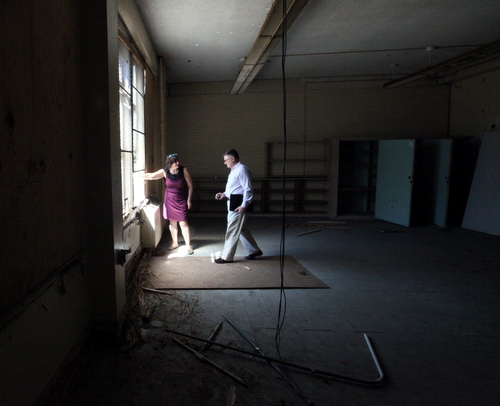 Marina Schoen and Keith Bartlett of Lycee Francais look out a second-story classroom window during a 2014 tour of Priestley.

The school bought the buildings and land — bounded by Green, Leonidas, Birch and Joliet streets — for $425,000 in 2015, Assessor’s Office records show.

Although the 1930s building had termite damage, broken windows, standing water due to a damaged roof and other signs of blight, Lycée Français officials were enthusiastic over the potential they saw in the campus in 2014.

“It’s got good bones. This neighborhood needs this. I think this is a viable option,” developer Jim MacPhaille, a Lycée Français parent who was advising the board, told Uptown Messenger during the 2014 tour of the facility. 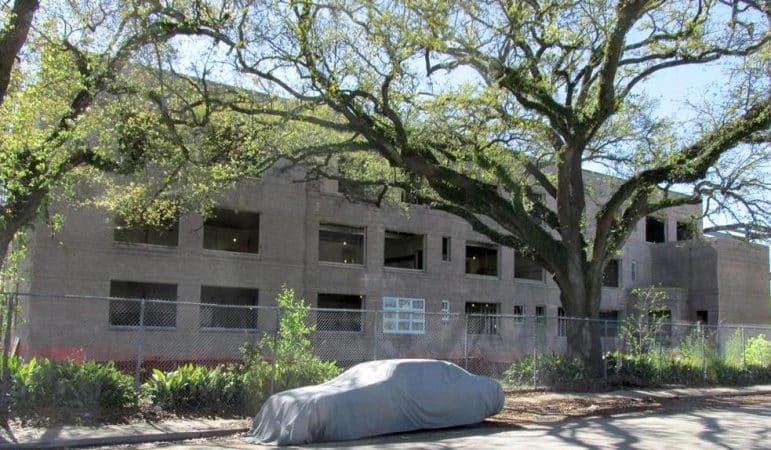 Renovations continue at the former Priestley school on March 19.

A school spokeswoman said officials expect construction at the Priestley campus to be complete in the fall or winter of this year.

Plans filed with the city call for a nearly 9,000-square-foot addition as well as an extensive renovation to the three-story 32,000-square-foot classroom and administrative building.

The separate gymnasium is also getting a makeover, including a new roof, and will be used for assemblies and performances as well as sports and physical education.

The projected construction costs, as shown on the building permit, will run $13.3 million. The school anticipates receiving $3 million in tax credits and $2 million in philanthropic support, with the rest financed, according to information on its website.

Amis du Lycée Français, the school’s supporting foundation, is sponsoring a capital campaign to raise the philanthropic funds for the renovation. It has taken in about $1.1 million toward its $2 million goal. 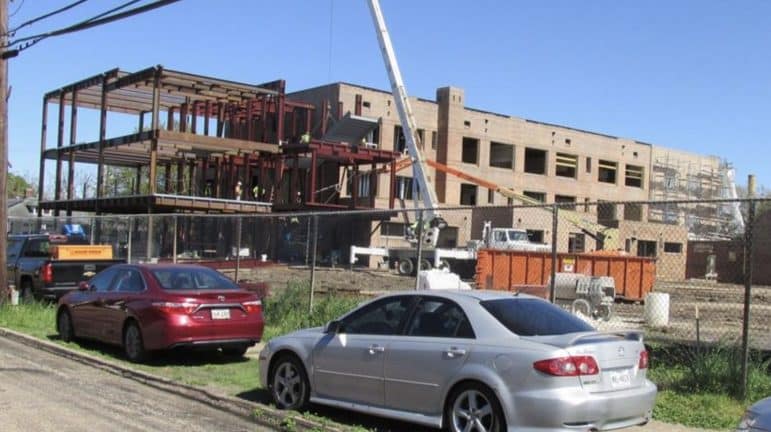 Lycee Francais is adding 9,000 square feet to the classroom and administrative building.

Years into the renovation, the Lycée Français celebrated a milestone in March, when a topping-out ceremony conveyed progress for the Priestley campus.

An ancient Scandinavian tradition, the topping-off ceremony marks the completion of a structure by placing the top branches of a tree on the highest beams, a rite developed “so that the tree spirit would not be rendered homeless,” according an article in The Ironworker.

“Reaching this incredible milestone during the 10th year of operation of our school is a testament to the strength of our program,” said Lycée Français CEO Marina Schoen at the ceremony.

Lycée Français, a type 2 charter school overseen by the state Department of Education, was founded in 2011 by a group of New Orleans parents, with the help of the French Consul.

In its 10th year, Lycée has about 1,075 students in its pre-kindergarten through 10th-grade classes.

The school follows the French National Curriculum and also adheres to aspects of the Louisiana state curriculum. Upon graduation, the Class of 2023 will be the first to receive both a French Baccalauréat and a Louisiana high school diploma.