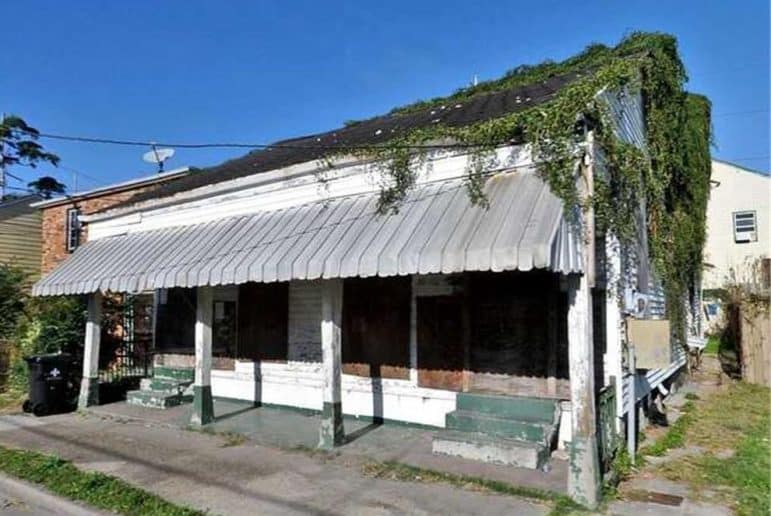 At the high end, a house on South Rampart Street recently sold for $600,000 and two others, on Josephine Street and South Liberty Street, have sold in the $400,000 range. At the other end of the price and move-in ready spectrum, a house on South Robertson Street, which looks like it is only a façade covered in cat’s claw at this point, sold for $30,000.

These homes and prices also reflect the evolving housing stock of the neighborhood. A quick drive around reveals modest family homes next to abandoned houses in a state of an advanced decay next to gleaming renovations. 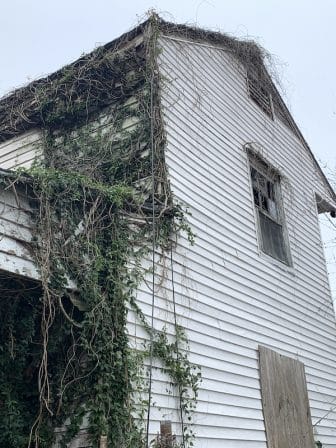 The house at 2315-17 St. Andrew Street is one that has seen better days. This cottage made it to the the Louisiana Landmarks Society’s list of New Orleans’ Nine Most Endangered Sites for 2020.

“The out of state owner sought demolition in 2018, but later withdrew the application,” the Louisiana Landmarks Society states in its announcement of 2020 list. “Neighborhood advocates fear it will suffer demolition by neglect or be sold to an investor not interested in a historically sensitive rehabilitation.”

At the most basic, it is a cottage, a double built in the 1860s with a mid-20th-century overhang in the front and a two-story addition in the back, built in the late 19th century.

It would take a new owner looking past the trash dumped on the sidewalk in front, near where neighborhood residents gather in the shelter of the overhang. The buyer would need to look past the cat’s claw interwoven throughout, including where the vine is so thick it mimics the peaked rooflines, and look past the weather-beaten boards covering the windows, the gaps between the wood siding, the broken windows.

It still has a charm. A real estate agent could point out its potential.

And the house could have a reprieve — it’s for sale. So maybe, just maybe, it will find its renovation angel. 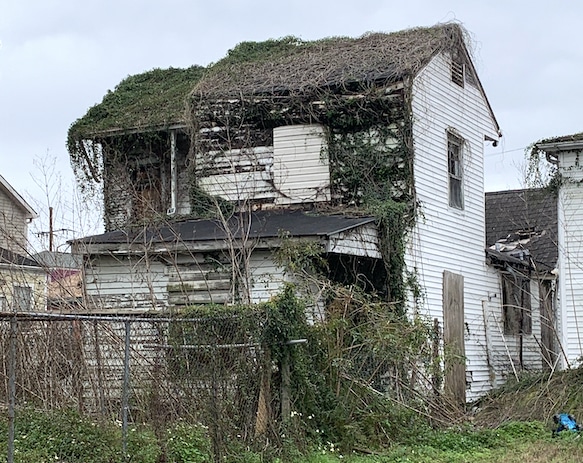 The rear addition as it looks today.

The Louisiana Landmarks Society states the house was most likely built as a home for 19th century workers at the nearby Keller Southern Soap Works.

Company founder Johann Heinrich Keller came to New Orleans from Zurich, Switzerland, at the age of 18 in 1848. With no money, he worked as a shipwright’s apprentice, then soon after at a small soap factory in Algiers. One year after that, he went to work at a soap factory owned by a man named Eppinger on St. Andrew Street.

About two years later, he purchased the property bounded by then-Howard, Freret, Josephine and St. Andrew streets for $600 from Dr. J.L. Riddell, who wanted to get rid of what was then considered, and probably was, swamp land.

In the city’s earlier years, the area where the house and Keller Southern Soap Works were located was owned by the Ursuline nuns, who decided to have a plan for a new faubourg created by architect, city planner and surveyor Barthélémy Lafon in 1810.

It was called Faubourg des Religieuses, and St. Andrew Street was named after one of the three Ursuline nuns who signed the acts of sale for the lots, Sr. de St. André Madier. At this time, the faubourg was in Jefferson Parish and part of the city of Lafayette, which incorporated in 1832 and annexed into New Orleans by the state legislature in 1852. 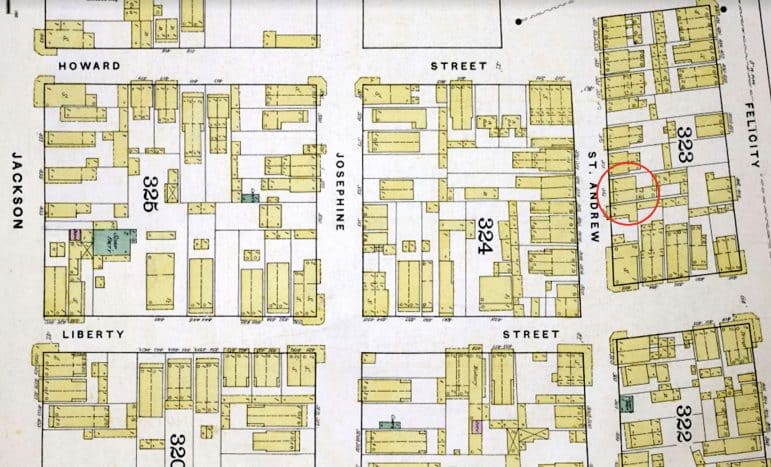 Around 1850, Keller built a soap factory on the property, adding on to it the over the years. The brands sold by Keller Southern Soap Works included laundry soaps Centennial OK, Cream Olive and White Marble and bar soaps Turkish Bath, None Equal and Castile Red Marbled.

It was the largest manufacturer of soap products in the South by the late 19th century and its products were distributed to the eastern United States, Mexico and Central America. In 1905, Keller sold the company to Magic Soap Works, and it was called the Magic-Keller Soap Works.

During Keller’s time in Central City, he built his own residence, a market on Magnolia Street and the buildings for stores and houses opposite it. He also had sycamores and elms planted in the area.

The Keller name lives on today: the house on St. Andrew Street is in a neighborhood association area called the Keller Group Neighborhood Foundation and the Keller Market Food Store is at the corner of Magnolia and Felicity streets. 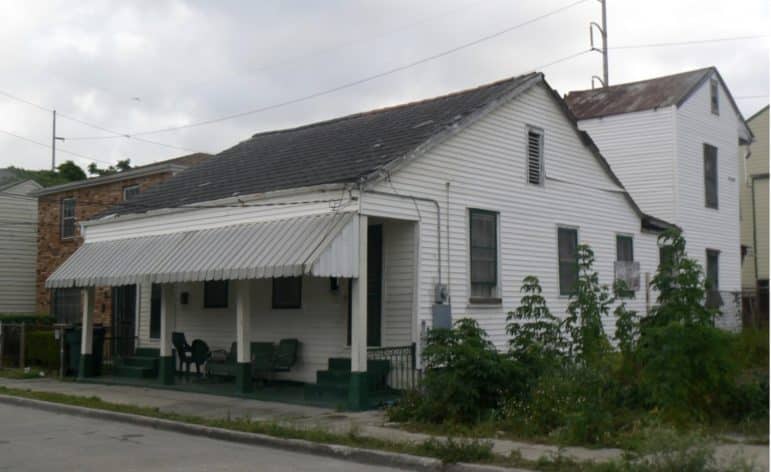 Can this house be saved?

Louisiana Landmarks Society stated that the house at 2315-17 St. Andrew Street was primarily a rental until 1950, when it had its first owner-occupant. 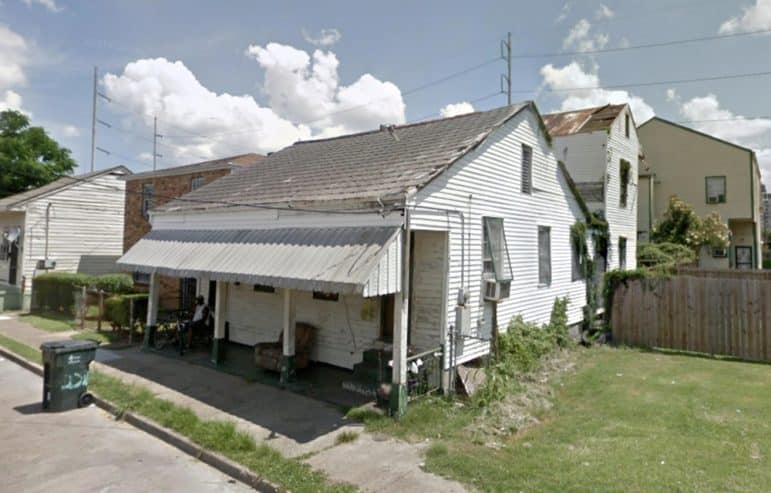 In 2015, the cat’s claw started encroaching, and by 2016, the windows were boarded up. Images from 2019, when the house was being considered for demolition — a request that was withdrawn — show the house much like it is in 2021.

It is on the market for $79,000, listed by Latter & Blum. Efforts to reach the homeowner and home’s listing agent were unsuccessful.

Despite its history, the lingering question is: Would it be financially feasible to restore it?

According to the Louisiana Landmarks Society, the house can get state and federal tax credits, so that whoever renovates it could recoup a percentage of qualified rehabilitation costs, which could make the renovation and redevelopment financially feasible. Even though the house might qualify due to its age for the tax credits, it would have to be turned into an income-producing property, including rental housing. that contributes to the local economy.

The National Park Service, the agency in charge of historic preservation for the federal government, states on its website that a 20% income tax credit is available for the rehabilitation of historic, income-producing buildings that are determined by the Secretary of the Interior, through the NPS, to be “certified historic structures.”

The State Historic Preservation Offices and the NPS also review the rehabilitation work to ensure that it complies with the Secretary’s Standards for Rehabilitation.

This is where the hot real estate market comes in. The house doesn’t look in as bad shape as the one on South Robertson that sold for $30,000. But it needs work, and a lot of it.

Lesley Poché, a realtor with McEnery Residential and co-owner of Lesley Poché Construction LLC, took a look at photographs of the house, remarking, based on her experience, that the foundation, exterior framing and floor framing, in addition to the roof, are “a mess.”

“It is going to cost at you at least $200,000 minimum to renovate,” she said, basing that on her prior experience.

That said, after looking at what other properties in the area are going for, Poché added, “I think post-renovation comps [comparable sales] are encouraging. When you start getting into the $400,000 range, it shows a lot of interest and confidence in the neighborhood.”

This is the fourth in a series following up on the Uptown sites named on the Louisiana Landmarks Society’s 2020 list of New Orleans’ Nine Most Endangered Sites.