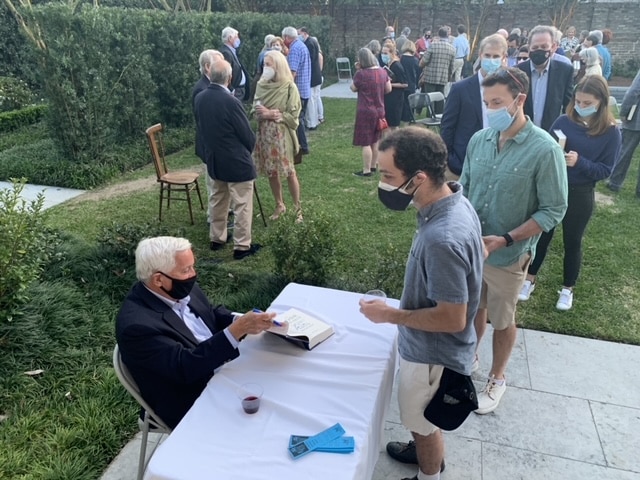 Author Walter Isaacson signs copies of “The Code Breaker.” on gene editing technology that he said  “will present us with great opportunities but great moral questions.”

At the garden of the stately manor house of Katherine and Tony Gelderman, on Saturday (March 13), the Garden District Book Shop hosted acclaimed author and Tulane professor Walter Isaacson for a combined celebration of his new book “The Code Breaker: Jennifer Doudna, Gene Editing, and the Future of the Human Race” and a celebration of Garden District Book Shop’s 40th anniversary. 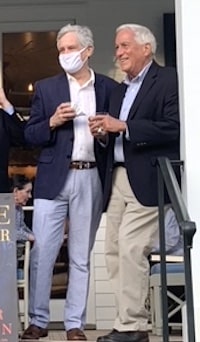 “For 40 years, Garden District Book Shop has charmed us,” said Christopher Tidmore, one of a group who purchased the store from founder Britton Trice earlier this year.

“It has been a great 40 years, and we’ve overcome a lot of obstacles,” Trice told the assembled audience. Despite bookstore chains, the rise of e-books and the gobbling maw of Amazon, Garden District Book Shop is poised to enter its fourth decade with a new children’s reading room and plans to add a connecting cafe and bistro, with three enthusiastic new owners besides.

When Isaacson, smiling, took the stage, it was for the first in-person event that the bookshop has hosted through the pandemic. The store has had a mix of Zoom events, virtual book club meetings and Friday evening YouTube “Happy Hours” with social media maven Rayna Nielsen. Isaacson addressed a lawn scattered with clusters of seated attendees, a long, rippling pool behind them.

“It’s great to actually see people in person … we feel it is the beginning of the reopening of the city,” Isaacson said. Of course, the event was limited in size and masks were required.

Walter Isaacson addresses the audience at the book store’s first in-person event since the pandemic began.

The new book centers on the story of Dr. Jennifer Doudna, whose work with the gene-editing technology CRISPR earned her and her research partner Emmanuelle Charpentier the 2020 Nobel Prize in chemistry.

CRISPR technology, in simplified terms, refers to a process that occurs naturally in bacteria, where bacteria can “snip” invader’s genetic material and save it so that it can be recognized in future invasions. It has played a key role in developing coronavirus vaccines.

However, this tool can also be used to alter genes (sequences in genetic material such as DNA, that code for traits in an organism) in other organisms. The implication is that it may one day be used to prevent hereditary conditions in humans — and one such experiment has already occurred, when a scientist attempted to alter human embryos to produce resistance to HIV.

“These types of technologies will change … not only our health … they will present us with great opportunities but great moral questions,” Isaacson said.

“My book does not have all the answers,” said Isaacson, noting that one concern about CRISPR’s human applications is the prediction that wealthy people would be able to “buy better genes.” 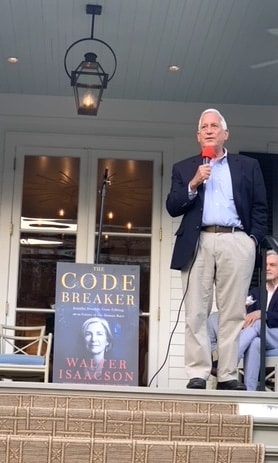 Walter Isaacson discusses his new book at the event held in a Garden District home.

Isaacson then took questions from the audience before signing copies of the book, and attendee Margarita Bergen expressed ethical concerns about the CRISPR technology.

Isaacson countered that the bigger problem could be the fear itself, referencing the anti-scientific fears surrounding vaccines. “You can learn anything and once you understand it, it’s not so scary,” he said.

Another attendee asked about CRISPR’s use for “changing intelligence.” Intelligence, Isaacson replied to the question, is more than neurons and memory, and there are indeed many forms of brilliance — artistic creativity, musical ability, social intuition and logic, to name just a few.

Isaacson noted, too, that with things as complex as, say, curing personality disorders, answers are “way down the pipe” as multiple factors and genes cause these conditions.

Isaacson also added that many people who are highly respected in their fields have been “forged by” the drive to overcome medical conditions such as dyslexia, depression and physical disabilities. He says it would make sense to begin working with diseases with clear genetic causes and to “go slowly.”

However, he notes that “curiosity is what leads to discovery.”

“There’s a joy in understanding how something works,” Isaacson said.