In a webinar sponsored Wednesday (March 3) by the New Orleans Regional Black Chamber of Commerce, U.S. Sen. Bill Cassidy told participants that his staff in Washington and Louisiana will be available to help resolve problems businesses might encounter when applying for the Payroll Protection Program, Small Business Administration and other funding available from the $1.9 billion federal stimulus package currently in the U.S. Senate. 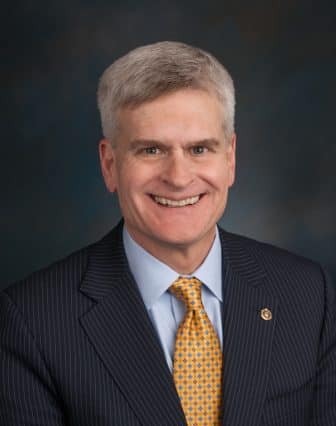 “Everybody in my state has a seat at the table,” Cassidy said. Several of Cassidy’s staff members were also on the call to introduce themselves and field questions from participants.

The pandemic was “a punch in the gut” for cities like New Orleans that depend on tourism, he said. Cassidy congratulated attendees for their work in building businesses that will “employ future generations.”

Cassidy said he expects the economy to grow by 4.2 percent in the coming year, which he called “a good thing” and the highest growth spurt in recent years. “We’re trying to get the economy reopened by trying to control the pandemic,” he continued.

Though President Joe Biden’s efforts to include the $15 minimum wage in the stimulus package is now off the table, Cassidy said he would not be surprised if another push was made soon to pass the legislation.

He believes that portions of the stimulus package will continue to direct funding to individuals and businesses over the next couple of years. “It all won’t get spent this year,” Cassidy said.  Barring inflation — which he hopes doesn’t occur — Cassidy expects that a positive “stimulatory effect” will continue to be felt.

Cassidy also praised the work of local HBCUs, especially Xavier University. Cassidy is committed to getting more money for institutions like Xavier and Dillard University to promote the next generation of Black leaders and develop talent among those who haven’t seen that opportunity. “I recognize we have potential among young people,” he said.

Cassidy says the SBA has been given “more money than they have ever had” — and that there is funding available specifically for minority-owned businesses. He also pledged to help minority businesses that are also veteran-owned businesses receive their fair share of federal contracts.

Regarding the policy initiative known as the Green New Deal, Cassidy thinks it could signal opportunity for Louisiana. On the one hand, he said, if the U.S. and Louisiana do not produce oil and gas, “the Russians will, which will kill a lot of jobs in our state.” On the other hand, Louisiana could to continue to produce energy but with a lower carbon footprint by converting natural gas to hydrogen. In doing so Louisiana could “preserve the goals of our families and lower the carbon footprint.”

A 63-year-old physician who was born in Highland Park, Illinois, Cassidy was elected to the U.S. Senate when he defeated Mary Landrieu in 2014.  Cassidy previously served in the U.S. House of Representatives and the Louisiana State Senate.

Cassidy was one of seven Republicans who voted to impeach President Donald Trump on Feb. 13. He was immediately censured by Louisiana’s Republican Party. The senior U.S. senator from Louisiana, Cassidy will be up for re-election in 2026.

Cassidy reiterated that his office was available to fast-track applications for nonprofit organizations’ certification by the Internal Revenue Service and to help overcome hurdles other individuals or businesses might encounter. “We would rather bring someone in rather than push them out,” he said.

His primary Louisiana office is located in Baton Rouge with a regional office at 3421 N. Causeway Blvd., Suite. 204, in Metairie.

Under the direction of LaVerne Toombs, a former staff member of U.S. Sen. Mary Landrieu who has more than 20 years of experience in local and federal government, the New Orleans Black Regional Chamber of Commerce advocates on issues impacting small businesses and provides its members with pertinent information on the legislative process and access to government officials and agencies.

In what has been one of the fastest moving campaigns in Louisiana history, early voting begins Saturday in Louisiana’s 2nd Congressional District race. A highly diverse field of 15 candidates is vying to replace Cedric Richmond, who has joined President Biden’s staff.