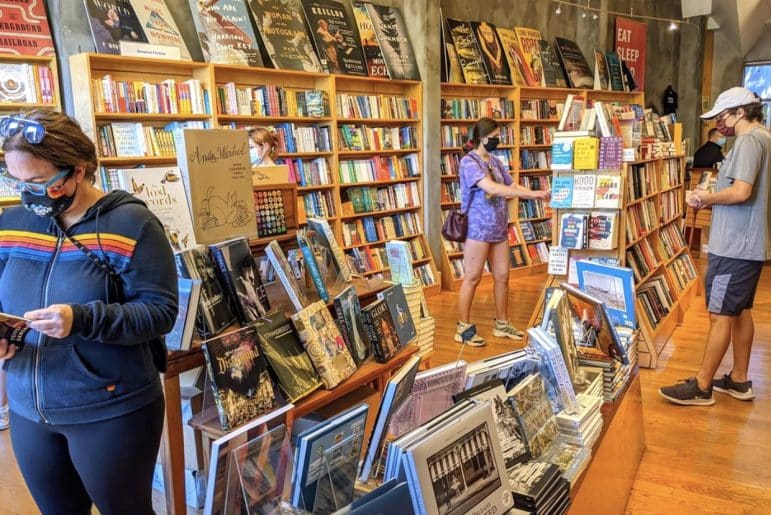 Independent booksellers ordinarily rely on foot traffic and in-person browsing for their sales. That all changed in March of last year. Two Uptown bookstores, however, have found ways to adapt and even thrive through the pandemic.

Garden District Book Shop, in a historic building that once housed a roller rink on oak-canopied Prytania Street, and Octavia Books, set back on a diagonal on its quiet eponymous street near the river, have both continued to sell books to residents across the city.

By altering their in-store browsing, as well as shipping and delivering tomes directly to the homes of their devoted clientele, the booksellers have shown tenacity in a time of chaos and uncertainty.

Rayna Nielsen, who has worked at Garden District Book Shop for almost six years and manages the store’s social media, remembers the shutdown nearly a year ago. “Everything locked down. Nobody knew what we were going to do,” she said. “We all went home.”

Then they began brainstorming. “We just started texting, ‘Well … we’re gonna figure this out.’ So we came into the building and we just start figuring it out,” she said.

The Garden District Book Shop, like Octavia Books, has altered its business model during the pandemic.

‘DMs in the middle of the night’

Though both Octavia and Garden District initially closed to customers, the work did not stop. Nielsen reports that, in the first throes of quarantine, the bookshop began receiving orders online and through the bookstore’s social media accounts.

“All of a sudden, I’m getting DMs in the middle of the night,” Nielsen said.

Nielsen notes that the increase in online orders continued as the lockdown stretched on, with the store going from shipping five to 10 website orders a week to more than that amount each day.

“Especially at a time when you can’t engage in a lot of other activities, a book is really something that fits the times. You can sit back, and books will take you places,” said Tom Lowenburg, who co-owns Octavia Books with his wife, Judith Lafitte.

“We consider what we do an essential service, on a lot of different levels.”  — Tom Lowenburg

“We’ve been open seven days a week — whether the doors were locked or not. We’ve been providing literary service to the community,” Lowenburg said. “And we consider what we do an essential service, on a lot of different levels. Books are necessary in people’s lives, as it’s necessary to education, to businesses. It’s necessary to our sanity.” 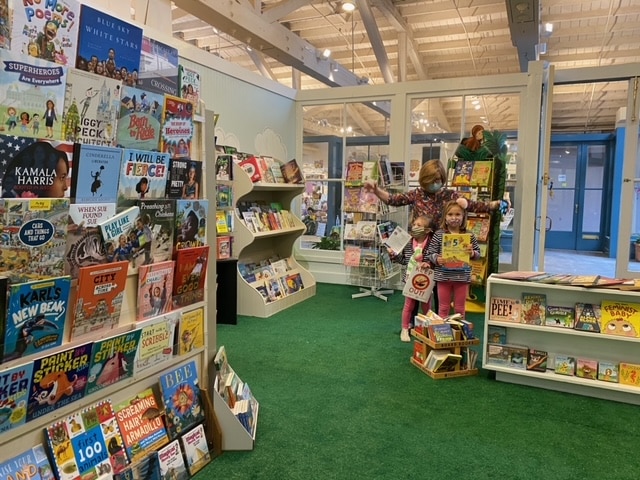 Connecting to the community

The Garden District Book also changed hands during the pandemic. Britton Trice, who has spent the past 40 years nurturing the book store, retired on Feb. 1. He sold the shop to Christopher Tidmore, his wife Barkley Rafferty and Carroll Gelderman.

Situated near Lafayette Cemetery No. 2 and Commander’s Palace, the book store has traditionally drawn tourists as a large portion of its clientele — until the pandemic.

Tidmore said that, early in the shutdown, he worried about the bookstore’s future. At one moment when the bookstore was closed to the public, he said, he turned to Trice and asked, ‘What are we going to do?’

“He said, ‘We will connect with our customers, and let them know we are here,’”  Tidmore recounted. 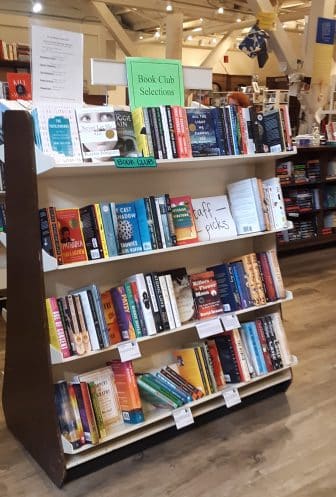 Book club selections at the Garden District Book Shop. Book clubs having been meeting via Zoom during the pandemic.

“The Garden District Book Shop is very lucky in that, like Octavia, we are a very connected bookstore for the local community and new authors,” he said.

Both bookstores have seen an outpouring of support in these uncertain times.

“I think that people are finding what we’re doing useful, but they’re also making a conscious effort to shop local,” Lowenburg said.

Nielsen at Garden District also recognized that part of the influx of remote orders was a deliberate show of support. “People realized ‘Hey, the shops that are going to close are gonna be the little guys.’” she said.

Not all local bookstores have fared as well as the Uptown shops. During the past year, Dauphine Street Books moved to Arabi from the French Quarter, while Crescent City Books took their shop to a smaller location.

Lowenburg said he doesn’t take it for granted that Octavia has been able to stay in business through the pandemic.

As customers began placing their orders remotely, both shops also began driving books all over the city through their in-house delivery services. At one point, Lowenburg was making deliveries seven days a week. 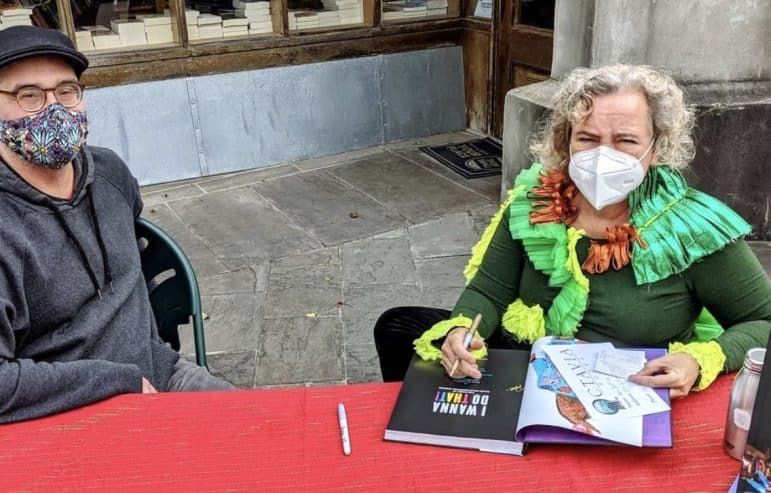 Co-authors Yoni Goldstein and Echo Olande sign copies of “I Wanna Do That” at an Octavia Books open-air signing in January.

Both shops also took their literary events online to avoid in-person gatherings. Gone, at least temporarily, are the days when the booksellers could host authors in their shops for talks and book signings.

Looking for a way to keep readers connected to authors, Octavia Books began hosting “sidewalk signings” for people to meet authors and get books signed outdoors.

The first such event was a signing for Levees.org founder Sandy Rosenthal’s “Words Whispered in Water.” On a steamy day in August, Rosenthal signed copies for eight hours.

Lowenburg spoke wistfully of when the store will be able to host in-person events again, but also noted that online events mean that people can attend from around the country. 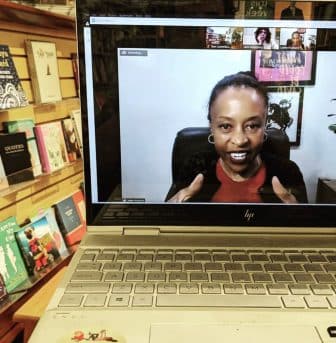 Ladee Hubbard in conversation with Jami Attenberg for the launch of “The Rib King,” an Octavia Books event.

In the same vein, Garden District has also been regularly hosting Zoom events and Friday “happy hours” on YouTube. On a recent happy hour, author Michael Tisserand showed photographs that his father captured in the 1950s of gay Mardi Gras revelers from his upcoming book “My Father When Young.”

“In a Zoom event, it’s better to have a conversation back and forth. You’ve got two people talking rather than one person doing a presentation,” Nielsen said. “It just makes for better entertainment.” 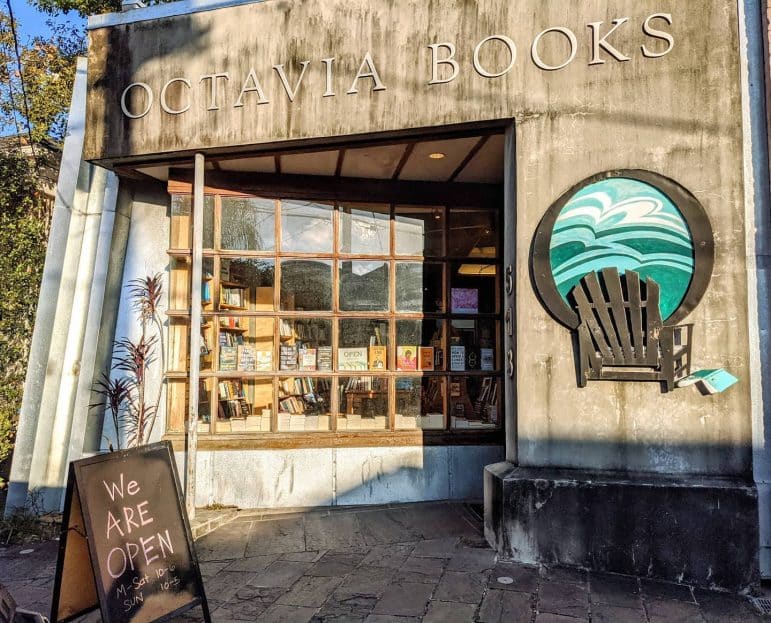 Bookstores are open but with limited capacity.

‘We have a role to play’

With the virus deeply affecting people’s lives, the booksellers naturally began to notice a change reflected in their customers’ reading selection.

“We get to know our customers, and we try to meet what they need, listen to what they have to say,” Lowenburg said. “There are a lot of issues that come up, and books respond to those issues.”

Lowenburg noted that there has been a great demand for books about the virus, as well as other pandemics. He and Tidmore also said that anti-racism books have been big sellers.

Tidmore also reports that books about New Orleans and New Orleanians have become more popular during the past few months.

“There’s a passion for protection of a place — similar to what we felt after Hurricane Katrina,” Tidmore said. The more practical travel books are, predictably, less popular, he noted, but travel narratives have been selling as people dream of their post-COVID sojourns.

Not surprisingly, both Tidmore and Lowenburg said cookbooks and baking books have surged in popularity, as people have spent more time at home.

Looking to the future, both shops will see alterations, as Octavia expands their store and Garden District adds a connecting coffee shop with a full kitchen and bar. The new owners of Garden District had purchased Still Perkin’ in The Rink in September 2020.

However they change, both Octavia and Garden District will remain in the Uptown community, peddling literature to New Orleanians.

“When anything happens in the community, whether it’s a hurricane or a pandemic — or both of them at the same time — we need to be there,” Lowenburg said. “And every time it’s different, but we have a role to play. Books are important to our lives.”