A pot of red cacciatore sauce bubbles on the stove, sliced eggplants roast in the oven, and bright green bowls of salad are piled high with chickpeas and jewel-like cherry tomatoes. An Italian feast is being prepared – but while Mediterranean flavors abound, there’s no cream, cheese or meat to be found. At Clairly Vegan, owner Claire Steiner has been attracting customers with plant-based versions of classic flavors. 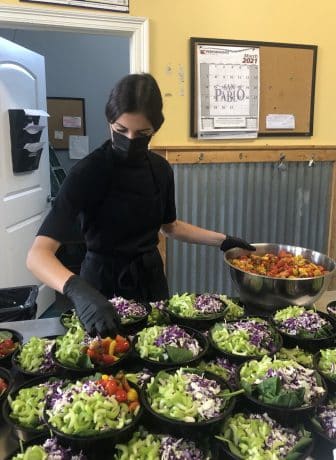 Steiner started her vegan catering and delivery business just this June in her own kitchen, with her mother, Anna Cannizzaro Steiner, helping out. “She would come over and we would cook away all day,” she said.

The business now sells 75 to 100 orders per week out of Carrollton Commissary, a rented kitchen space on Willow Street. It employs two cooks and three drivers as well as supporting Steiner.

They deliver an ever-changing menu of vegan meals. One week’s menu, for example, was inspired by Steiner’s Sicilian upbringing, with veganized classics like eggplant cacciatore and mushroom piccata over gluten-free macaroni.

Again, Steiner’s mom served as her inspiration. Although Creole Italian food tends to be loaded with meat and cheese, Steiner said the kind of Southern Italian cooking she learned from her mom relied more on fresh ingredients, making it easier to translate into a vegan menu.

“Light, full of citrus – those are the kinds of things I learned to cook from her that I will be transferring to a plant-based form,” she said.

Although Steiner worked in restaurants since she was a teenager, she didn’t start out planning to open a vegan kitchen – especially not in the middle of a pandemic. Drawn to veganism for the healthy lifestyle, she often posted photos on Instagram of food she made for herself and her kids. Commenters started to ask, “When are you going to cook for me?”

When she needed a new source of income during the pandemic, she decided to go for it. Starting a new business during the COVID crisis took a leap of faith, but Steiner said there were some advantages to starting then. The pandemic has made people more health conscious — and people got tired of cooking three meals a day for themselves while stuck at home.

Steiner and the other chefs prep the food on Mondays and Tuesdays. Customers can order online and pick up the food on Tuesday evening, or have it delivered. The business delivers as far as Mandeville, and Steiner hopes to expand the kitchen so that she can sell prepared food in local grocery stores.

“We hope to grow the business regionally as far as we can,” she said. “We would love to be able to have a kitchen in Baton Rouge.” 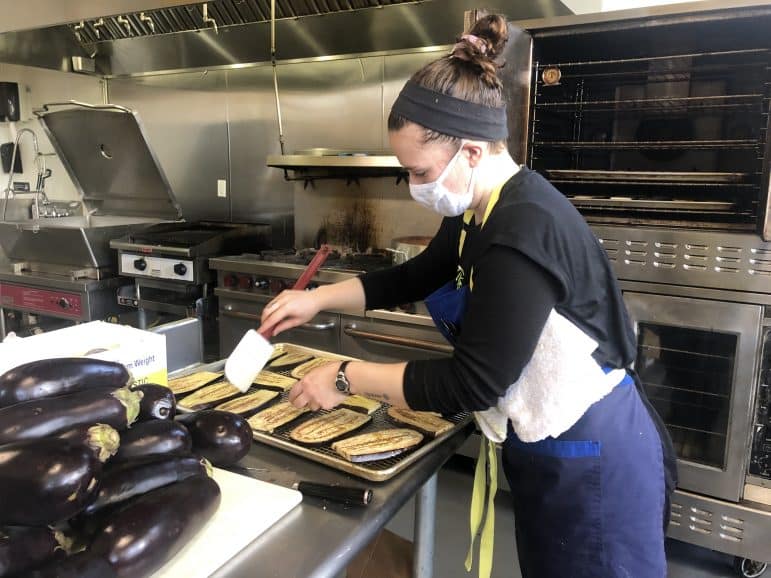 Jenna Duryea, a cook at Clairly Vegan, flips over slices of roasted eggplant for vegan cacciatore.

For one of the cooks, 23-year-old Jenna Duryea, getting to work in a vegan kitchen is a “dream-come-true situation.” She went vegan in high school for health reasons.

“I’m Sicilian, too, so this is like” – Duryea let out of a happy sigh while slicing eggplants – “the way to my heart!”

Duryea said she’s excited to show people that a plant-based diet can be easy.  “I’m not a mean vegan,” Duryea said. “I just eat the food that makes my body feel good.” 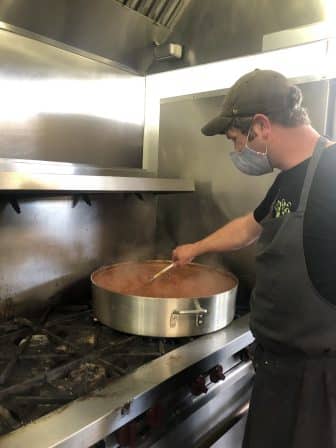 Fellow cook Steven Waddell, 37, comes from a completely opposite background – he specialized in charcuterie and cheesemaking.

“This is a very different thing for me,” he admitted. But that doesn’t turn him off, as he loves a challenge: “This has been a really fun project to work on.”

For him, learning how to prepare vegan food means that he can cook for more people, and people are the whole reason he cooks.

As he put it: “The food and drink are merely a vessel to create memories.”