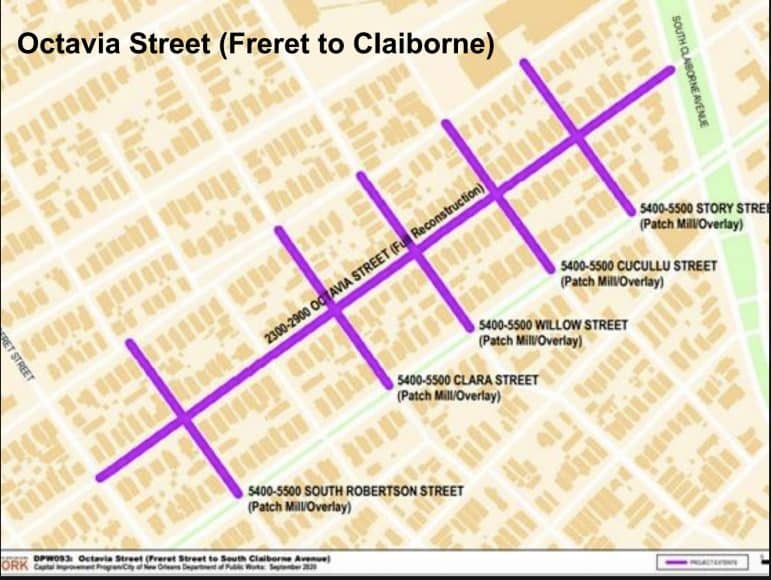 The Octavia Street roadwork project — which encompasses work on seven blocks of Octavia Street, from South Claiborne Avenue to Freret Street, and 10 blocks branching off of Octavia — is set to begin in April and conclude at the end of the year.

The $5.1 million project is part of the city-wide Capital Improvement Program, a roughly $2.2 billion collection of over 200 projects around the city, aimed at upgrading roads, sewerage and other infrastructure.

On Monday (March 29) evening, the Mayor’s Office of Neighborhood Engagement hosted an online meeting to inform residents and field questions about street repair work coming to Octavia and the side streets between Claiborne and Freret.

Kimberly Turner, the outreach coordinator with Roadwork NOLA, noted that the residents had waited for the upcoming improvements “for a while.”

Octavia Street will be getting full reconstruction work in the 2300 to 2900 blocks. This involves repairing sewerage, water and drainage lines; completely reconstructing the street; and performing sidewalk repair.

The side streets will receive patch mill/overlay work, which will repave the asphalt, fix the sidewalks, and perform upgrades to the curb cuts to bring them into ADA compliance as needed.

Turner outlined the COVID-safety precautions that would be observed at the project site, including temperature checks, reporting all known cases of COVID-19 immediately, and providing hand sanitizer or hand-washing materials to all workers.

Daniel Lee, the project manager with Public Works, mentioned that the side streets — the 5400-5500 blocks of Story, Cucullu, Willow, Clara and South Robertson streets — were added to the project scope after the team realized that those roads were also in poor shape.

Lee mentioned “alligator cracking” on Cullulu Street — the scaly networks of cracks on the faded blacktop — as evidence of their disrepair. Lee estimates that the work will be completed in about “200 working days.”

For road closures, traffic advisories will be issued through the Mayor’s Office, Turner said. Signage will also be posted at the site.

Turner warned attendees that the area will be an active construction site, and “it will not look like what it looks like now.” Equipment will be stored in a to-be-determined staging area.

Once the project is finished, Turner assured residents, the “genetic makeup of the streets” will be the same — parking will not be altered.

One resident asked about accessible parking for disabled residents during construction. Turner replied that temporary accessible parking could be arranged by contacting her at roadwork@nola.gov or 504-658-7623, and she would work with the engineer to make accommodations.

They said residents can expect a 48-hour warning before waterline closures and 24-hour warnings before test closures.

Construction is scheduled for Monday through Friday from 7 a.m. to 5:30 p.m., with a possibility of weekend work. The project team is not certain yet where construction will begin.

Many of the residents were concerned that the work would harm or even kill the trees on their block. Attendee Matt Mantle asked whether there was any plan to expand the width of the sidewalk, and whether that would harm trees.

Lee replied that there are no current plans to widen the street or sidewalk. He stressed that the team would be working with an arborist. “Obviously, we don’t want to kill any trees,” he told the attendees.

Turner added that “we will work very closely with Parks and Parkways.” She said that where necessary, the health of trees affected by the project would be assessed to see whether they could be pruned back if necessary.

While one of the first slides in the presentation was a “Sleeves up NOLA” ad, part of the city’s vaccination campaign, the presentation ended with an appeal from Stephen Mosgrove, the neighborhood liaison from the Mayor’s Office of Neighborhood Engagement, for those in attendance to get vaccinated.

“I do want to take a second to thank you all for continuing to protect yourselves by wearing facial coverings, maintaining social distance and now making efforts to get vaccinated against the COVID-19 virus,” Mosgrove said.

“Please encourage your neighbors to get vaccinated. All Orleans Parish residents 16 and up are now eligible,” he said. “They can call 311 for an appointment if they are not sure where to receive one.”

Residents can contact Kimberly Turner at roadwork@nola.gov or call 504-658-7623, or contact Stephen Musgrove at Stephen.Mosgrove@nola.gov or via text to 504-688-3909 for more information on this project. See here for a PDF of the presentation.