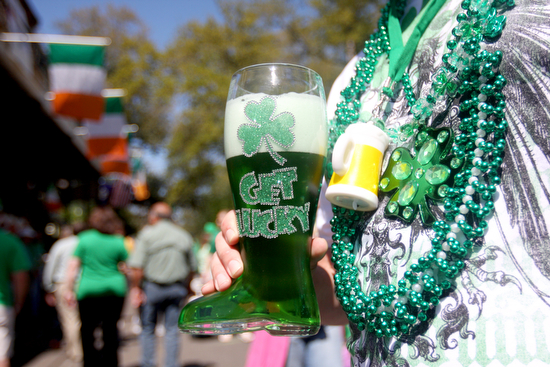 But New Orleanians have found a way to celebrate, along with some Irish and Irish-at-heart brethren in Chicago. Shamrock Our Blocks, the brainchild of the Chicago’s Southside Irish Parade Organization, is applying the Yardi Gras concept to St. Patrick’s Day.

Shamrock Our Blocks started as a way to celebrate St. Patrick’s Day and support local businesses in Chicago. Inspired by this effort and the momentum created by the Carnival house floats, Brian Moore, a Southside expat in New Orleans, asked if Chicago would like some support from New Orleans.

He and Irish Channel resident Angela Timberlake put out the call locally and immediately received enthusiastic responses from New Orleanians who want to get in the spirit.

The New Orleans version will be heavily influenced, inspired and fueled by the work the Krewe of House Floats and other Yardi Gras participants like Krewe of Red Beans did to save Mardi Gras 2021.

In the same vein as KoHF, the Shamrock Our Blocks group will be making a map of all the participants, both in New Orleans and in Chicago.

There is no cost to join or to have your name listed on the official map. “Any and all are welcome to participate,” Timberlake said in a press release.

“The hope is that on the day we were supposed to be parading, folks can drive, walk, bike around to enjoy the hard work we all put in,” Timberlake said, “and maybe even catch a cabbage.”

For more information, see the Shamrock Our Blocks page on Facebook.