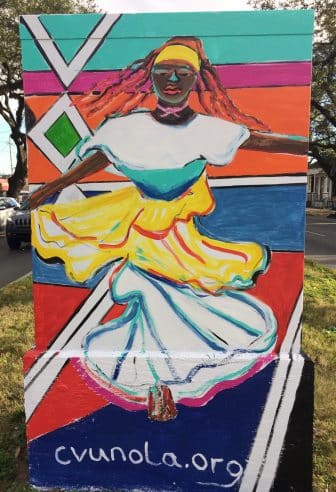 “The Dancers” at Carondelet and Louisiana

As Uptown resident Ivana Dillas drove home from work every day along Louisiana Avenue, she noticed how the junction boxes on the neutral ground attracted tags and graffiti and were surrounded by litter.

“Studies have shown that neighborhood beautification reduces these unsightly activities, as well as crime,”  Dillas said.

She saw the website address for Community Visions Unlimited, the organization behind the beautification initiative, written on painted boxes elsewhere and contacted them. She asked how she could help, especially along the Louisiana Avenue corridor.

“I loved the idea of putting artists to work, and I began fundraising and directing donors to the CVU website,” Dillas said. Then Mayor LaToya Cantrell, who had supported the project when she was on the City Council, got wind of the effort, and her office stepped in with a significant donation.

The section of Louisiana Avenue now has almost all of the junction boxes painted. 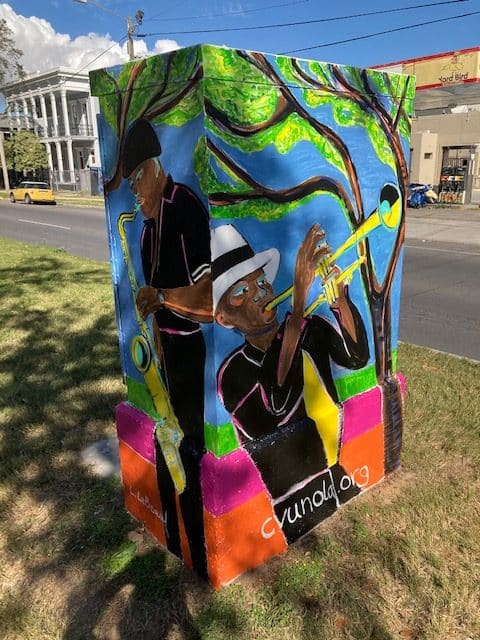 “Horn Players” by artist Linda LeBoeuf at Baronne and Louisiana.

Two of the Louisiana Avenue boxes, the “Horn Players” at Baronne and “The Dancers” at Carondelet, were painted by Linda LeBoeuf, the artist behind 39 art boxes citywide. She’s been painting the utility boxes for the past three years.

With a background in advertising, LeBoeuf understands visual impact.

“I think about the images with the ‘three-second rule’ in mind,” LeBoeuf said. “People driving or riding by have to be able to take in the image in a short period of time, so I go for bold designs and bold colors.” 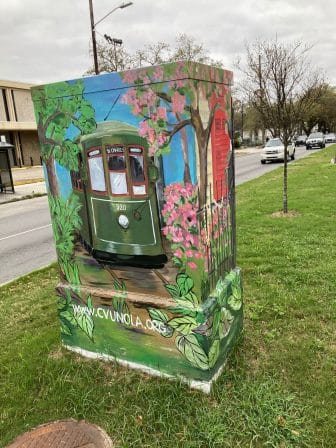 On St. Charles Avenue and Louisiana, the art box features a typical New Orleans scene with an iron fence and vegetation on one side and a St. Charles streetcar on the other, which faces the actual streetcar line. Rebecca Madura is the artist who painted the box.

“When I am painting, people roll down the their windows and yell ‘thank you!’” Daning said. “It is so rewarding.”

About 40 of the painted junction boxes grace Uptown streets. The initiative is primarily paid for through grassroots fundraising.

One Uptown art box, on the corner of Nashville and Freret, was especially grassroots. 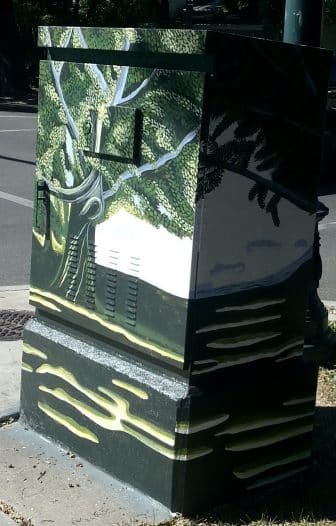 A resident who lived nearby was keen to raise the funds for her neighborhood junction box to be painted, and sent CVU the amount needed in 15 separate checks that she had collected from the neighbors.

Like many of the art boxes, this creation by Angelica Verkeenko complements and honors its surroundings. It mirrors the view of oak trees seen from the vantage point of that corner.

The art box on Napoleon Avenue and Clara Street, in front of Ochsner Baptist Hospital in the Napoleon medical corridor, is a portrait of and tribute to the late Charles Tubre, a long-time advocate for people with disabilities.

It was created by Daning and commissioned after his death by the Advocacy Center, where Tubre worked for years.

Paralyzed as the result of a spinal-cord injury he suffered in a diving accident when he was 14, Tubre worked tirelessly to help other people with disabilities and make buildings and transportation accessible to all. 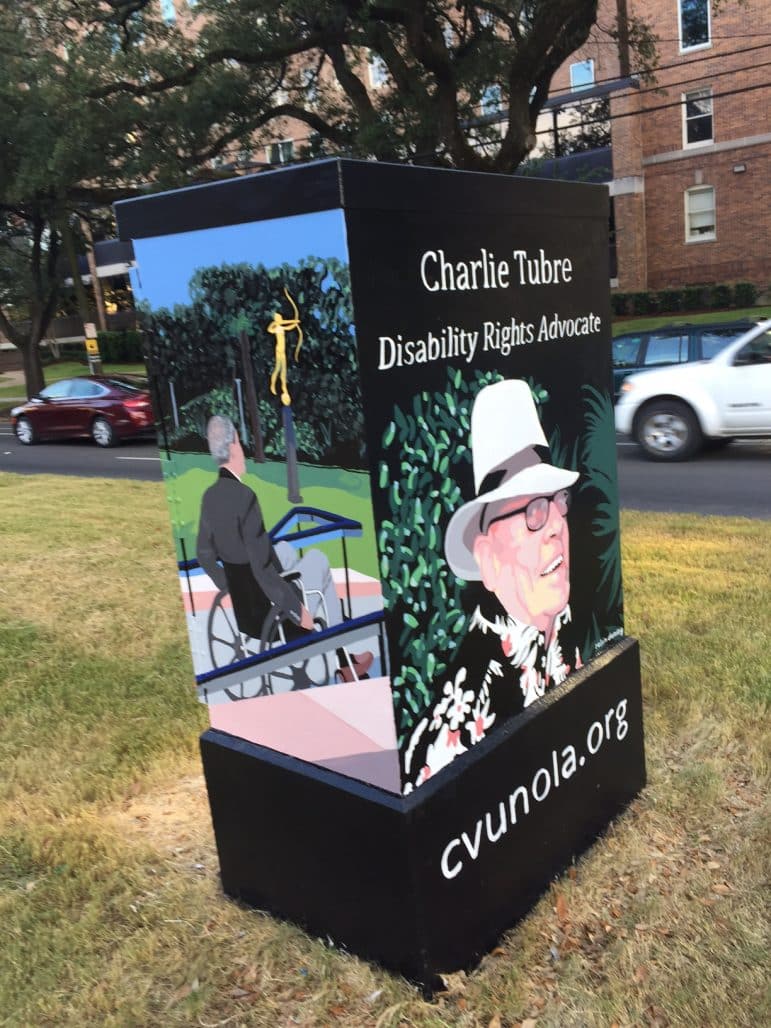 These painted art boxes on the neutral grounds contain the controls for traffic lights, and decorating them is the brainchild of Community Visions Unlimted founder Jeannie Tidy, who has a long history of working in community revitalization.

Tidy started this art box project in the devastated Lakeview neighborhood after Katrina to beautify the area and lift people spirits, as well as to promote rebuilding and economic development.

She initially sought permission from the Department of Public Works but was directed to the neighborhood associations to get their blessings. So with the help of then-Councilwomen Cantrell and Susan Guidry, along with Denise Thornton of Lakeview nonprofit Beacon of Hope, Tidy went to work.

This project has now grown to more than 200 in New Orleans, with more than a dozen others in the outlying suburbs. “Our goal really is to have every one in the city painted,” Tidy said.

Each box costs $750 to paint, Tidy said. Artists are paid a stipend of $300, according to the CVU website. Any local artist over age 18 may submit an application to register.

Once the junction box to be painted is identified, the registered artists are notified and given the location and the neighborhood’s wishes and design ideas. If they are interested, they send in a proposal.

The proposals are reviewed by a panel consisting of two art experts and a neighborhood representative who selects the artist. The review process is blind, that is, no one knows the identity of the artists who are submitting proposals.

The selected artist receives a paint kit from Helm Paint & Supply, a project sponsor. They also receive a mini box — a replica of the actual junction box that they paint with the identical design. These mini boxes are auctioned off in competitive bidding to raise money for the project.

“Sadly, we could not hold our event last year due to the pandemic,” Tidy said, “but despite that, we held on online version and did mange to raise a respectable amount of funds.” But like most other nonprofits, revenues are definitely down.

Community Visions Unlimited has raised more than $100,000 to pay the artists, purchase paint supplies and maintain the art boxes. And they are continuing to beautify Uptown and to make those junction boxes look interesting.

And happily, the graffiti and the litter they once attracted is no longer an issue.