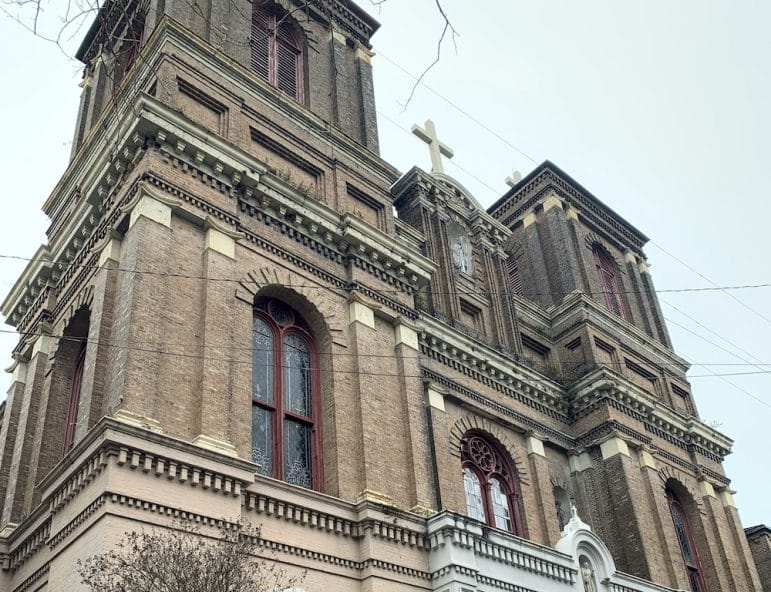 There are few, if any, churches that have the treasures of St. Alphonsus, which opened in 1857 in the Lower Garden District. Once past its front doors, the church’s beauty — the ceiling frescos by Italian-born New Orleans artist Dominico Canova, the stained glass windows by German artist F.X. Zettler and the hand-carved walnut communion rail — are a revelation.

But behind the pretty façade, there are problems. 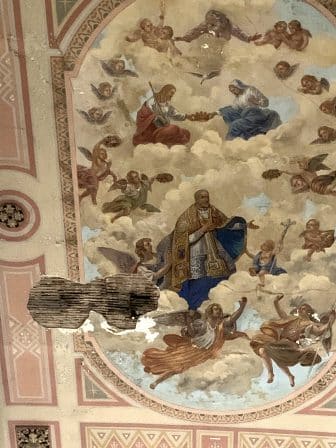 The frescoes are damaged by water, noticeable by the wooden laths seen in the ceiling where a painted cherub could have been. The lead pieces that hold together the stained glass windows are disintegrating.

When the Louisiana Landmarks Society released its New Orleans Nine Most Endangered Sites in November 2020, St. Alphonsus made the list, because of “severe deterioration.”

“The needs are vast,” the LLS stated. “The exterior envelope needs to be sealed, the roof needs replacement, the walls [exterior brick walls] need repointing, and the stained-glass windows need restoration.”

On the inside, “plaster walls and stunning fresco ceilings are crumbling and falling off the wooden lath skeleton.” According to the society, the church is eligible for historic tax credits and the building could be sold and redeveloped.

In response to questions about the order’s plans for the building, Redemptorist spokeswoman Kristine Stremel stated: “Redemptorist leadership continues to discuss various options for the use and care of St. Alphonsus Church, but no decisions have been made.” 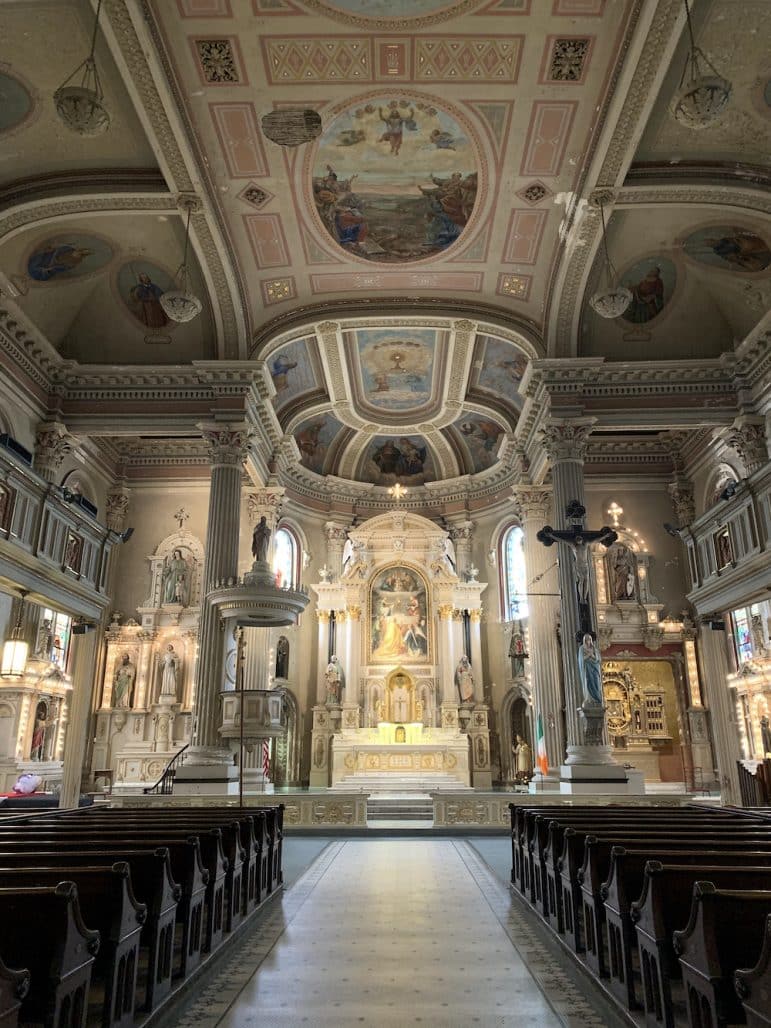 St. Alphonsus was named a National Historic Landmark in 1996.

It’s hard not to contrast St. Alphonsus to the other Catholic church across the street, St. Mary’s Assumption.

Located on the river side of Constance Street, between St. Andrew and Josephine streets, St. Mary’s is maintained and has a congregation, as well as being the site for the National Shrine of Blessed Francis Seelos, named for the beatified priest who was the prefect at St. Mary’s in 1866 until his death by yellow fever less than a year later.

On the lake side, St. Alphonsus sits, beloved but suffering from years of deferred maintenance, neglected except for the support of the dedicated members of Friends of St. Alphonsus, historians and preservationists who recognize its worth, both spiritual and temporal.

It was named a National Historic Landmark in 1996, the highest historic designation from the U.S. Department of the Interior, and had been placed on the National Register of Historic Places in 1973. 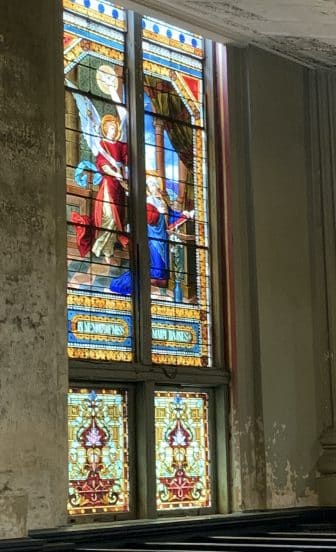 The Friends of St. Alphonsus was founded in 1990 after a group entered the then-abandoned church to view “the splendid F.X. Zettler stained glass windows,” says its website. The windows were installed in 1890.

They also saw the deterioration that had taken place and, determined to save the church, founded a nonprofit group dedicated to its preservation. For years the group held events and fundraisers for maintenance and repairs, but it has been somewhat quiet, even before the COVID-19 pandemic.

But quiet doesn’t mean that it is being ignored. A tour from longtime board member Michael M. Davis reveals even more treasures, including the Our Lady of Perpetual Help shrine, built within the church in the 1930s, with its gold-leaf tiled backdrop. 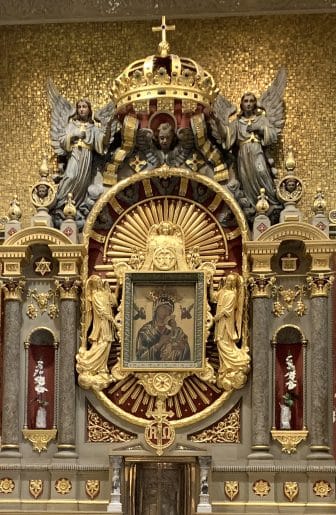 There are also some interesting symbols, which have a decidedly “The DaVinci Code” aura about them, somewhat tucked away within that were pointed out by Office Coordinator Cheryl Caprera.

Above the main altar, which was made by Buscher of Chicago and installed in 1868, is a large painting by St. Alphonsus brought from Italy in 1872.

Davis’ affection for the church is obvious. “The church is priceless,” he said, noting the stained glass windows and frescoes, which he thinks are the largest collection of Canova frescoes in the world.

He is a realist, though. “One of the first things we need is a new roof,” Davis said. He declined to name how much he thinks it would cost to completely restore the church.

New Orleans, immigration and a parish with three churches

The Congregation of the Most Holy Redeemer, known as the Redemptorists, was founded by St. Alphonsus Liguori in 1732 in Italy. In 1843, the order was invited by Archbishop Antoine Blanc of the Archdiocese of New Orleans to come to the area.

The boundaries of the city were much different then, and the Redemptorists built three churches in what was called the city of Lafayette in Jefferson Parish. (It was merged into New Orleans in 1852.) 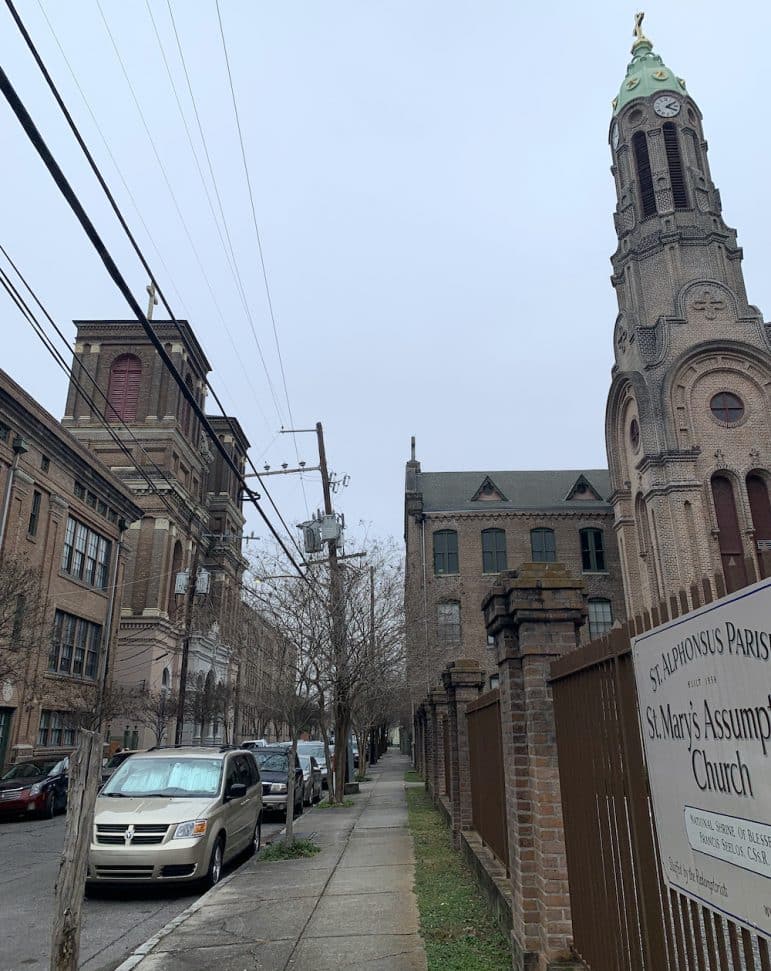 St. Alphonsus’ cornerstone was laid June 10, 1855, by Archbishop Blanc. Designed by architect Louis Long of Baltimore, it was completed in 1857.

In the booklet published by Friends of St. Alphonsus, the church is “an impressive example of 19th-century Italianate architecture.”

Bon Secours was constructed in the late 1850s in a Romanesque style and was located on the Uptown side of the 900 block of Jackson Avenue, between Constance and Laurel streets.

St. Mary’s Church’s cornerstone was laid in 1858, and was completed in 1860. It was named a National Historic Landmark in 1974, noting it as a rare example of German Baroque Revival architecture. It had also been placed on the National Register of Historic Places in 1971.

As the years went by, the neighborhood evolved and the number of parishioners in the three churches changed.

Because of that loss and the damage from the hurricane of 1915, Bon Secours’ days were numbered. The church held its last Mass in 1925 and the following year the church was dismantled by the Feitel House Wrecking, which sold the church’s architectural salvage on site, according to a New Orleans Magazine article. Among the items saved from sale was the church’s altar.

The neighborhood had started to change again during 1950s, with many parishioners moving to the suburbs. In 1965, Hurricane Betsy hit, causing minor damage to St. Alphonsus, but major damage to St. Mary’s

St. Mary’s was closed for 10 years. It was almost demolished, but saved by protests from dedicated preservationists. While it was being restored, services continued at St. Alphonsus. St. Mary’s was rededicated in 1975.

Hurricanes, again, altered the churches’ fortunes. In 2005, Hurricane Katrina damaged both extensively. Of the two, St. Mary’s was repaired so it could reopen for regular services.

St. Alphonsus still bears the scars of that storm. But, it is hard to hide true grace; St. Alphonsus just needs an angel to restore it to its true form.

Want to see the church? You can go to one of the concerts hosted by
Friends of St. Alphonsus featuring the Electric Yat Quartet: March 24, 31; April 6, 7, 14, 28; and May 4. See here for information and tickets. 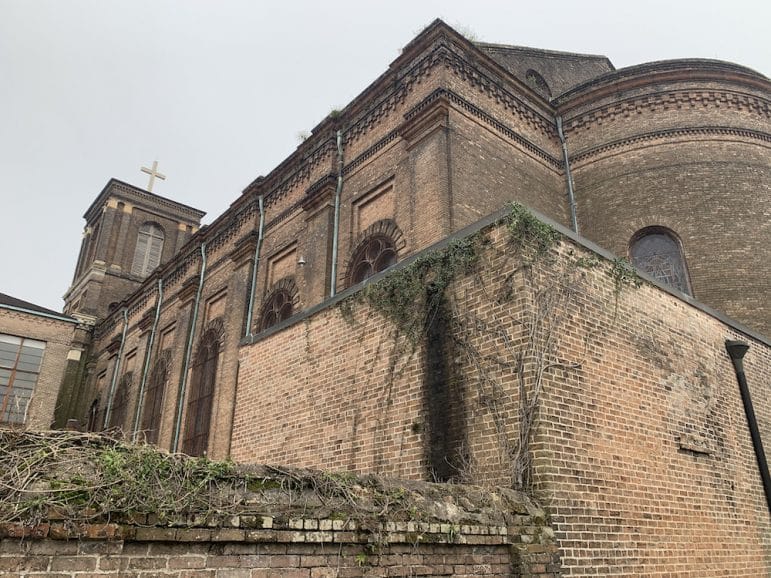 The back of St. Alphonsus Church

This is the third in a series following up on the Uptown sites named on the Louisiana Landmarks Society’s 2020 list of New Orleans’ Nine Most Endangered Sites.