This is the second in a series following up on the Uptown sites named on the Louisiana Landmarks Society’s 2020 list of New Orleans’ Nine Most Endangered Sites. 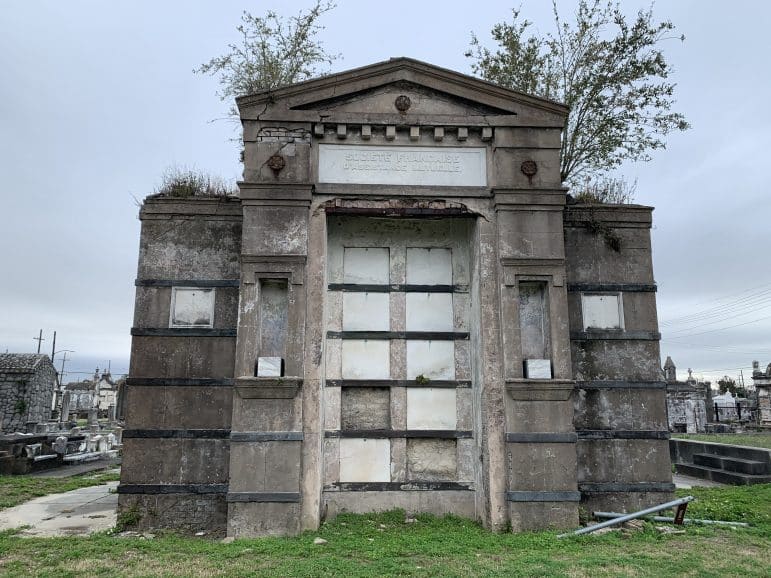 A tree is growing from the French Benevolent Society tomb in Lafayette Cemetery No. 2.

The cemetery off of Washington Avenue in Central City is, to be expected, quiet on a Monday morning. Tombs in various states of care are engraved with names reflecting the teeming diversity of New Orleans when the cemetery was established in 1850: Oberschmidt, Armato, Battiste, Tujague, Noble.

While not as cinematically famous as Lafayette Cemetery No. 1, the now-shuttered landmark across from Commander’s Palace, this cemetery bordered by Washington Avenue (where the main entrance is located), South Saratoga Street, Loyola Avenue and Sixth Street has a faded grace, and offers solace for the dead and living. 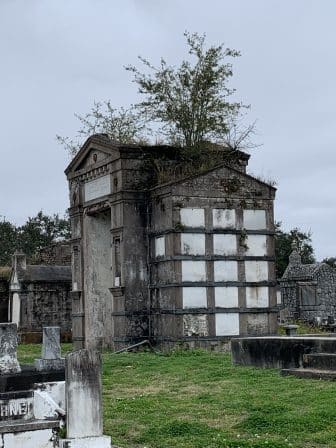 Among the tombs, the French Benevolent Society Tomb stands out for its elegance — and for the tree growing out of its roof, part of its “deterioration from abandonment and neglect,” stated the Louisiana Landmarks Society when placing the tomb on its New Orleans’ Nine Most Endangered Sites for 2020.

The 40-vault tomb is an “architectural and cultural remnant of the working-class benevolent society founded in 1868” and “… serves as the final resting place for 150 New Orleanians of French ancestry, including many children,” the Louisiana Landmarks Society stated.

“Reconstitution of the society may be possible, allowing for a return to active ownership and tomb restoration and maintenance,” according to Louisiana Landmarks. Help, as it turns out, is on its way.

A native New Orleanian, Hotard said her family has long owned tombs: her grandmother’s French side of the family has one in St. Louis Cemetery No. 2, and other family members are entombed in St. Patrick Cemetery No. 2 and Metairie Cemetery.

Preservation and restoring cemeteries are a passion for Hotard, but there are sometimes obstacles. “One of the biggest challenges are the cemetery property laws,” she said.

“Families don’t know they have a tomb in a historic cemetery,” she continued. “It’s hard to restore tombs because, while the city owns the land, they don’t own the tombs. It’s a process.”

“Families don’t know they have a tomb in a historic cemetery. It’s hard to restore tombs because, while the city owns the land, they don’t own the tombs.” — Juliette Hotard

The process Hotard is talking about is Chapter 38 of the Code of Ordinances governing cemeteries owned by the city, which was revised in 2020. Tombs are also subject to a state law (RS 8:308) governing the sale of interment spaces.

What it says is that for the city to do any renovation or repair work — even in conjunction with a private, state or federal grant or fund — in a city-owned cemetery, the tomb (or as the ordinance states, “cemetery spaces”) has to be more than 50 years old and have deteriorated due to neglect.

The city has to then contact the owner-of-record or the spouse, heirs, assigns or successors with a written notice sent by registered or certified mail. The city also has to post a notice on the tomb and advertise in the official journal of the parish notifying the record owner et al. of the renovation and repairs will be made before the one-year period.

So, essentially, the city has to wait a year before it can do any work on a tomb.

That said, the cemetery superintendent has some leeway. When there is no evidence of ownership or interments in the tomb, the city can make repairs, and after they are completed, place a general notice in the official journal of the parish stating that if no one comes forward to the office with written evidence of ownership of the tomb within 60 days of the publication, then the cemetery authority has the right to reclaim ownership and resell it after six months.

Any remains in the tomb stay there, even for the new owners.

The plot thickens (in a good way)

The French Benevolent Society Tomb, as well as others in Lafayette Cemetery No. 2, has gotten the attention of Save Our Cemeteries.

“I go by my personal rule, the five-year rule,” Hotard said. “I will look at a tomb, and see if it needs to be restored now, and can be later.”

The French Benevolent Society tomb restoration needs to happen sooner rather than later. It often takes years to raise funds to restore a tomb, she said.

“All of these society tombs have a rich history, and most of the members have died out,” Hotard said, “so there really is no one to care for them anymore.”

The good news is that Save Our Cemeteries was awarded a grant to hire a company, Durable Restoration Company from Cincinnati, Ohio, to come to New Orleans to do an assessment of seven society tombs in the city, including the French Benevolent Society Tomb, then determine how much it will cost to fix them.

Among the things they may find, in addition to a tree and other vegetation growing out of it, are inappropriate repairs, such as pouring cement on a tomb, which destroys the soft red brick.

“I haven’t been able to find a grant for restoring cemeteries,” she said.

Another factor working in cemetery restoration’s favor is the appointment of tomb restoration expert Emily Ford, owner of Oak & Laurel Cemetery Preservation, as superintendent of the city’s Division of Cemeteries, part of the Department of Property Management.

All of these factors are steps in the right direction for bringing the French Benevolent Society Tomb back to the beauty it once was.

Cities of the Dead

Lafayette Cemetery No. 2 is not the oldest cemetery in the city. That is St. Louis Cemetery No. 1, established by Spanish Royal decree on Aug. 14, 1789, replacing St. Peter Street Cemetery, which had become overcrowded.

What makes the city’s burial sites stand out are the aboveground tombs, nicknamed as “Cities of the Dead.” The most commonly held belief about the tombs is that they were built because of the city’s water problems, with most of the land below sea level and its accompanying drainage issues.

While these issues don’t help, the style originated in the Mediterranean region thousands of years ago, according to the Lafayette Cemetery Research Project.

When the Spanish and French arrived in New Orleans, the tradition of aboveground burial tombs – tumba in Spanish, tombeau or tombe is French — came with them. In those countries it was most likely a result of rocky soil that made it easier to create a tomb.

Having a family tomb, rather than in-ground burial plots, was a status symbol for a family. For French Benevolent Society members — and the members of various societies, social aid and pleasure clubs, religious groups and fraternal organizations — the multi-level tombs offered the entombment option to those who couldn’t afford a family tomb.

Lafayette Cemetery No. 2 is divided into four quadrants, and is dominated by the tombs of more than 20 societies dedicated to causes ranging from organized labor, French and German benevolent organizations, and social aid and pleasure clubs, according the city’s government’s Division of Cemeteries site.

Most of the society tombs of Lafayette Cemetery No. 2 appear abandoned.

One thought on “Endangered Places: French Benevolent Society Tomb in Lafayette Cemetery No. 2”