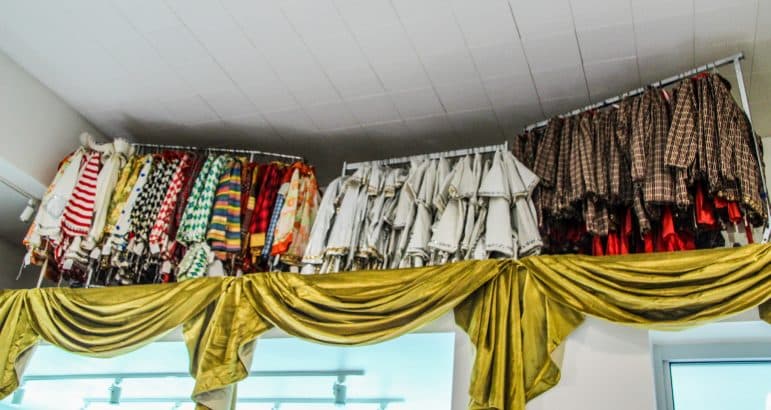 Costumes are among the items for sale at the ricRACK thrift store on Martin Luther King Jr. Boulevard.

“I knew I could no longer sit on the sidelines and do nothing,” Parker said.

Eventually, it lead her to found ricRACK, a nonprofit organization its website describes as “combining creative skill building with environmental responsibility.”

Everything that ricRACK does, Parker said, in some way combats the waste prevalent in the fashion industry, which is estimated be the second-largest consumer of the world’s water supply and pollutes the oceans with micro plastics.

What’s more, 85% of all textiles go to the dump each year. And when this happens, the dyes and chemicals from the fabrics leach into the ground water and release greenhouse gasses.

To promote the productive recycling of clothes, ricRACK has opened a thrift store in Central City that sells donated clothes as well as those that have been used in films and TV shows, and sponsors a variety of sewing classes. 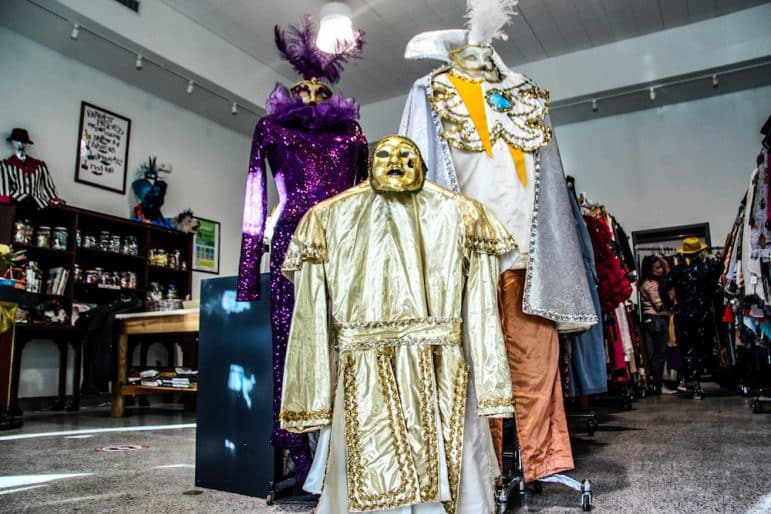 Connections in the film and theater industry supply ricRACK with used costumes.

Parker herself worked in the costume department for Cirque du Soleil for five years and then as a costume designer for theater and films, so she has those connections. So when the HBO show “Girls,” which she worked on, was finished, they donated all the clothing to Parker’s cause.

She started out by having annual “Hollywood Thrift” sales, which have now grown into the permanent shop at 1927 Martin Luther King Jr. Blvd., near Oretha Castle Haley Boulevard.

The location opened this year on Jan. 15, on the 92nd anniversary of Martin Luther King Jr.’s birthday.

She got lost while looking for a fabric store shortly after re-locating to New Orleans in 2007, and happened upon Oretha Castle Haley and all the new development happening in the area.

She right away knew if she ever had a brick-and-mortar shop, she would want it to be there. Last year, she saw a “for rent” sign at the retail space on MLK Boulevard, and the rest is history.

The building held a pawnshop when the OCH corridor, then Dryades Street, was in part the garment district. Now it is giving new life to old garments.

There is the shop that sells donated clothing, including those from films and TV shows, and trimmings. Lots of trimmings: piles of ribbons, bowls of plastic gemstones, shelves of thread, patterns, fabric remnants and entire bolts. 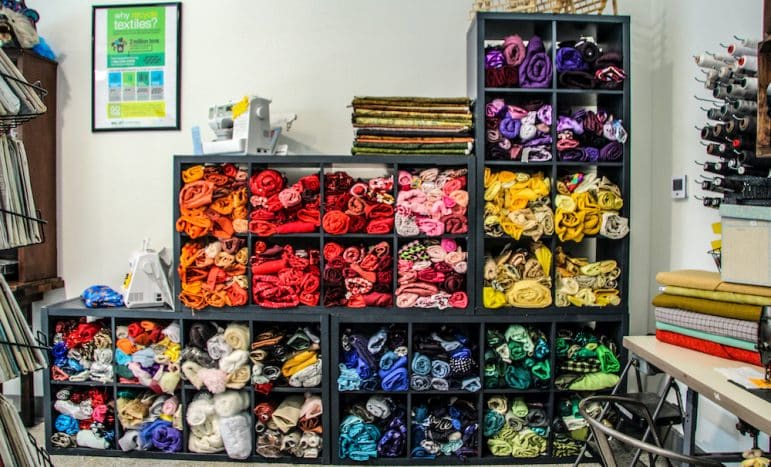 Fabric for sale at ricaRACK

Lighting technician Heidi Bayer learned about the nonprofit a few years ago, when Parker hosted an event for the International Alliance of Theatrical Stage Employees Local 478 (members are skilled crafts persons in the film industry).

She agreed with everything the mission of ricRACK wanted to accomplish, and she began volunteering to help with the “Hollywood Thrift” events.

“Alison’s vision for the children of New Orleans — to teach them to repurpose clothing and fabric that would be thrown away, and give them a meaningful activity — for her to put these two things together seemed like such a good idea to me,” Bayer said. “And because sewing is no longer taught in schools, there is no obvious way for young people to learn such a skill, making ricRACK’s classes even more relevant.”

At the beginning of the pandemic, she became part of  “Sew Dat” — a team that had a major role in getting masks out to essential workers in hospitals, the police and fire departments and major politicians. Starting in March 2020, for four months the “Sew Dat” project provided upwards of 5,000 yards of fabric and connected those who needed masks with people who could sew them.

Bayer now assists with the sewing classes, volunteers and is a member. Benefits of membership include the use of the studio space and discounts on purchases.

RicRACK has classes both for adults and young people. In fact part of the organization’s name stands for Repurposed and Altered Costumes for Kids (RACK).

“If ever there was a city that should have sewing classes for children to learn to make costumes,” Parker said, “this is it.”

One such student is 21-year-old Sylvester West, who started sewing with ricRACK as a junior in high school. Soon his talents landed his designs in two fashion shows for Black History Month. He’s gone on to show his designs at New Orleans Fashion Week and Essence Fest. See his video on www.ricracknola.com.

RicRACK classes range from beginning sewing for those who have never even threaded a sewing machine or cut fabric, to “DIY” which stands for “duplicate it yourself ” for those wanting to replicate a beloved garment. There is also “Fashion First Aid” for those in the middle of a project who are stuck on something like inserting a zipper, getting the fit right or any sewing crisis.

Upcoming are teen classes and ongoing are hand-sewing classes called Bespoken. People work on their own project in an old-fashioned sewing circle environment. RicRACK is a place to learn how to sew, create, re-use, imagine and succeed. Volunteers say it also provides a sense of community.

Volunteers are needed to help sort donations, measure fabric and attach price tags, among other tasks. Click here for more information about volunteer opportunities, now with social distancing in place.

In celebration of 2021 Earth Day, ricRACK is holding a “designer challenge” on display at