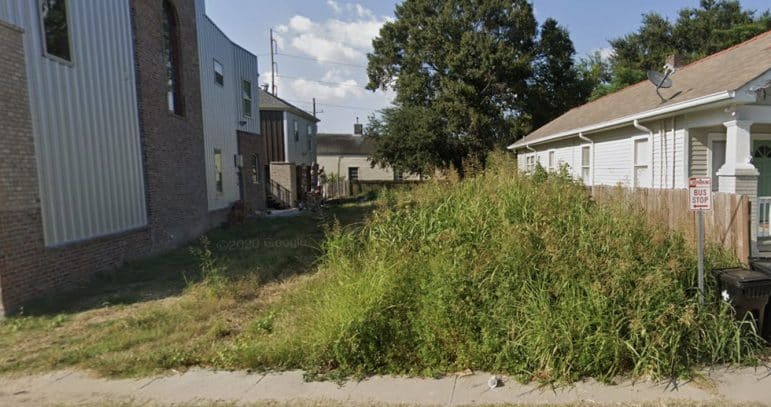 Developers are planning to build a new residential building with 11 apartments on an empty lot on Tchoupitoulas Street near Amelia. But first, they’ll have to face the concerns of local residents who say the proposed structure will cause parking headaches in their neighborhood.

The main architect of the proposed building on 3667 Tchoupitoulas, Charles Neyrey of M2 Studio, presented his plans at a virtual neighborhood meeting on Thursday. The neighborhood meeting was required before the studio can apply to the City Planning Commission to become an Affordable Housing Planned Development.

“I’m still trying to wrap my mind around how you can fit 11 units with parking on that little lot,” P. Adam Kelly, a member of the Faubourg Delachaise Neighborhood Association, told Neyrey.

In an 11-unit building, one apartment would be set aside for lower-income residents. For the rest of the apartments, Neyrey said, “we’re looking at market rate as the goal.”

According to city records, the last time there was a house standing on the lot was 2008.

Parking was the greatest concern to the handful of community members who attended the virtual meeting. There will be six parking spaces on the ground floor. City law allows developers to build fewer parking spaces if the site is within 600 feet of a bus stop, which this one is.

“It’s a little ridiculous to have 11 apartments and six parking units,” said Hunter Baxley, a resident of the neighborhood.

Neyrey noted that there is a reason that the city is encouraging more density and more affordable housing. The city decided in 2015 that it would offer density bonuses for affordable housing, and in 2019 the City Council passed a new law that made affordable units mandatory in the city’s hottest housing markets.

“We’re simply moving forward with the city’s plan,” he said.

MaryLou Uttermohlen, another resident of the area, was straight to the point on what she thought about the proposed development. “I really don’t want it in my neighborhood,” she said.

She said that there was already a parking shortage in the area, and a new apartment building would only make things worse. She said she would prefer to see a single-family dwelling with off-street parking on the lot.

“You’re putting way too many people into an area that cannot sustain it,” she said. “As a neighborhood where people love our neighborhood and living here, you’re making it miserable.”

When Neyrey started to say that he understood her concern, she replied: “It’s not a concern, it’s misery.”

M2 Studio is a local architecture firm with offices in New Orleans and Baton Rouge. Previous projects they’ve designed include the apartment complex at 8616 Oak St. and the Starbucks on Claiborne Avenue. They’re also involved in the new building with a Bud’s Broiler and a Morning Call on Canal and City Park boulevards.

Neyrey took notes from everyone who had left a comment, and thanked for the residents for voicing their concerns.

“Being from New Orleans myself, I care about my city and I appreciate people who care about their neighborhood,” he said.