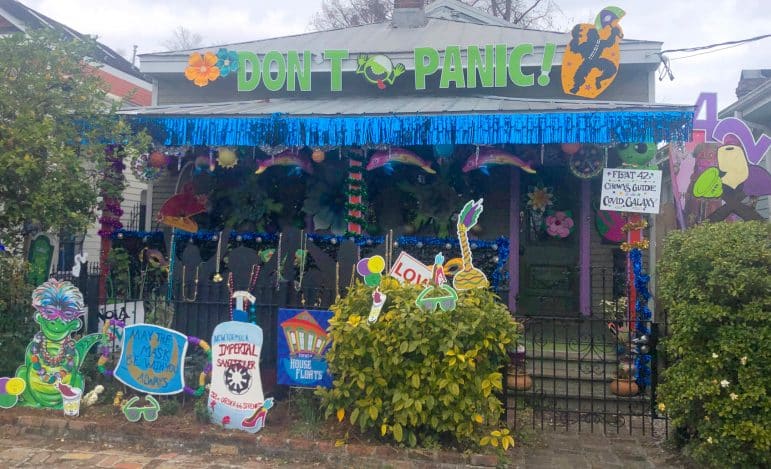 This Chewbacchus house float in Uptown is a reference to “The Hitchhiker’s Guide to the Galaxy” by Douglas Adams.

It’s almost unimaginable to think of Uptown New Orleans without Mardi Gras parades in February. But with parades canceled due to COVID, residents have imagined a new tradition – creating wild and whimsical Yardi Gras house floats all over their neighborhoods.

Yardi Gras, organized by the Krewe of House Floats, is a safe alternative to Mardi Gras parades in the coronavirus era. Instead of congregating in large groups to watch floats go by, people have decorated their own houses and turned the streets of New Orleans into a giant, stationary parade. 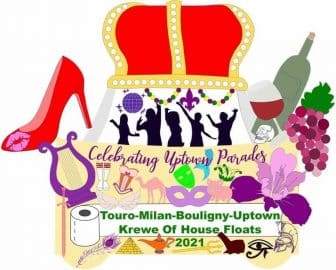 In normal times, the residents of the Touro, Milan, Bouligny and Uptown areas enjoy their easy access to Carnival parades, as reflected in their subkrewe’s theme: “Celebrating Uptown Parades.”

Residents are also working to help their neighbors in need and support the artists and musicians who make Mardi Gras possible. On the 1300 block of Valmont, the Camel Toe Lady Steppers are using their house float to encourage people to donate money to the Roots of Music Youth Empowerment Program and Stooges Brass Band, which has marched with the Steppers in Muses for almost two decades. (Donations can be made via Venmo to @TheRootsofMusic-Inc and @Walter-Ramsey-3.) 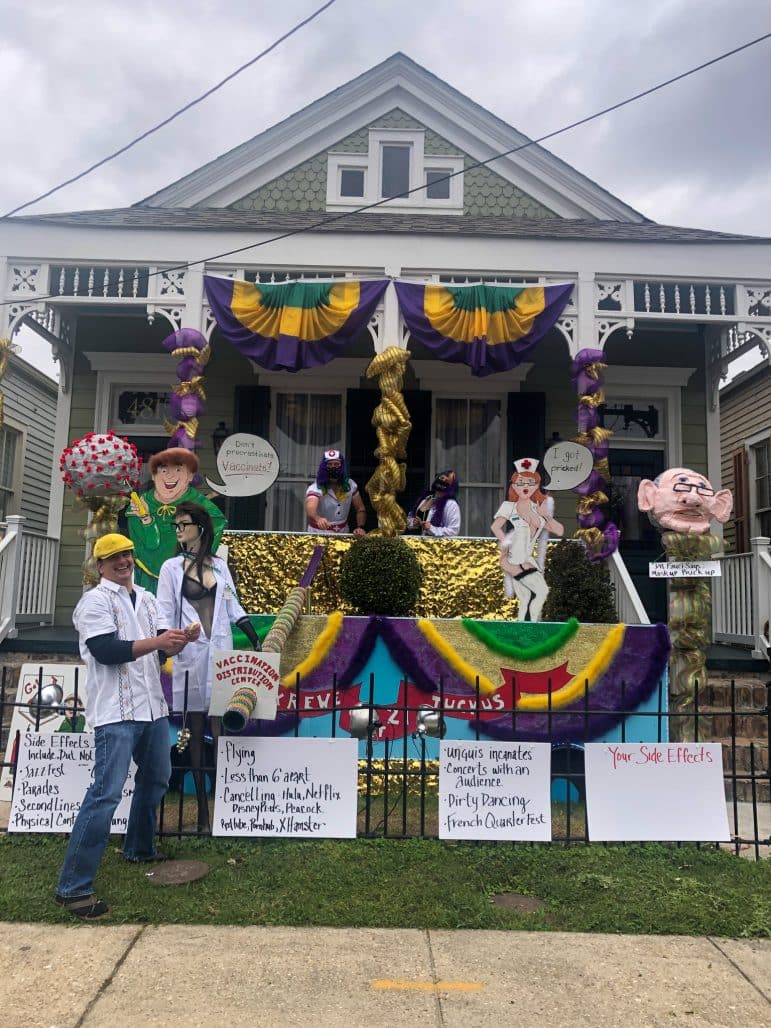 Ed Gardner receives a “vaccine” in front of his house float from nurse Jonny Finity and doctor Amy Kirvan.

On the 4800 block of Camp, seven households in the neighborhood worked together to create a ribald ode to inoculations. Associated with the Krewe of Tucks, the theme of the house float is “Get Pricked (Vaccinate, Don’t Procrastinate).”

On one pole there’s a papier–mâché head of Dr. Anthony Fauci, and on another there’s a menacing, spiked coronavirus. A sign warns that side effects of vaccination may include Jazz Fest, parades, second-lines and physical contact with strangers. There are also cut-outs of a scantily clad nurse and green-robed Friar Tuck, both holding syringes.

“It gets a little on the dirty side,” laughed Amy Kirvan, who dressed up in purple fishnet stockings and a white lab coat to distribute Tucks beads and “vaccines” to the neighborhood. On Mardi Gras Day, neighbors plan to costume as sexy nurses and doctors and slide syringes filled with Jell-o shots down a “vaccine distribution” tube from the porch to the sidewalk.

Kirvan said that neighbors took turns working on the house in shifts so that they could socially distance. Every time they thought they were done with the house, they’d come up with more ideas on creative touches to add.

“It’s all about community and bringing people together at a time we’re not allowed to be together, and finding ways to do that safely and responsibly, but creating something for the whole neighborhood to enjoy,” Kirvan said.

She’s proud of the “huge neighborhood effort” it took to bring the house together, especially when none of the participants are professional float builders.

“This has been a great way to bring neighbors together in a time when everybody feels so separated,” she said. “It’s been a good neighborhood activity — and lots of new relationships formed, which is really cool.”

And, all jokes aside, the house float has an important message.

“With this float in particular, it’s the hope of, ‘If we’re all in this together and we’re all vaccinated, we’ll have the chance next year to do it in person,’” Kirvan said. 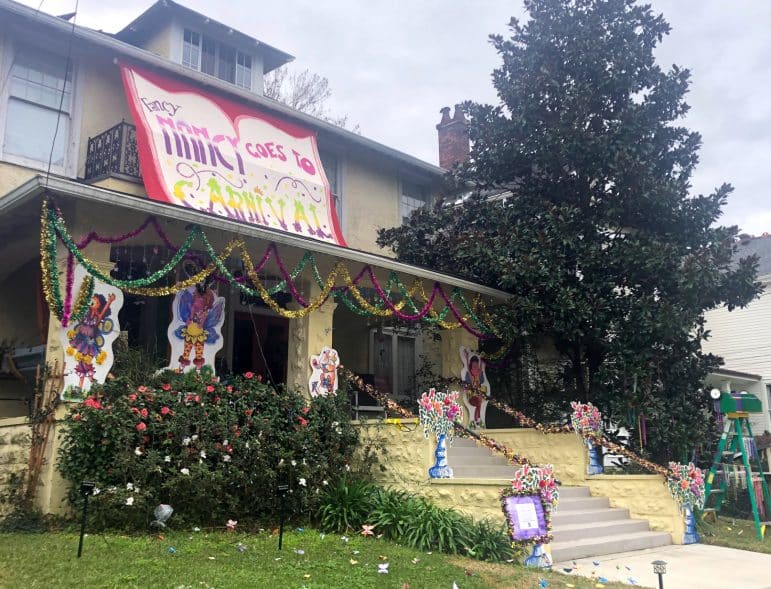 On a much more family-friendly note, children will love a house float on the 5200 block of Prytania based on the popular Fancy Nancy books series by Jane O’Connor. 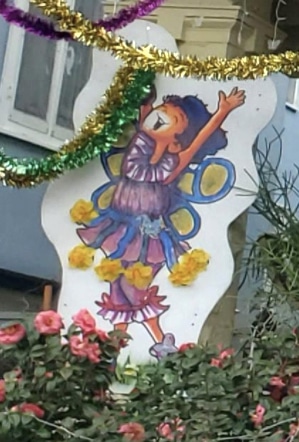 “Fancy Nancy seems like the kind of kid who would go to Carnival and love it,” said Soline Holmes.

Cut-outs of the titular Nancy — a little girl who loves to dress in butterfly wings, boas and tutus — dance on the porch.

Plastic butterflies flutter all over the lawn, a reference to Rex’s Butterfly King and the Fancy Nancy book “Bonjour Butterfly.”

The Holmeses estimate that it took 60 to 70 hours of work to put the house float together.

“We’ve had a heck of a lot of fun,” said Jim Holmes. He hopes that house floats will continue to be a tradition for years to come.

The house also has a Little Free Library box stocked with books for children to take. In addition, Soline Holmes created a website to go with the house float that features educational activities, links to buy the series from independent bookstores, and a raffle to get a storybook-themed shoe from Muses.

“I just wanted to promote books and reading and literacy,” said Soline.

Her husband noted that the house fits in with the neighborhood, which is close to the Latter Library, Tulane and Loyola universities, and many schools.

“It’s a recognition of the value of education and books,” he said.

Although Soline was “heartbroken” that her favorite holiday wouldn’t have parades this year, she’s been so happy to see the joy on kids’ faces when they see the house. On the Saturday before Mardi Gras, the Holmeses will throw boas, tiaras and books .

“Word has gotten around school,” she said. “I keep having kids come up to me at school and saying, ‘Gosh, I love your house. I didn’t know they knew where I lived!’”

See here for the Krewe of House Floats map.