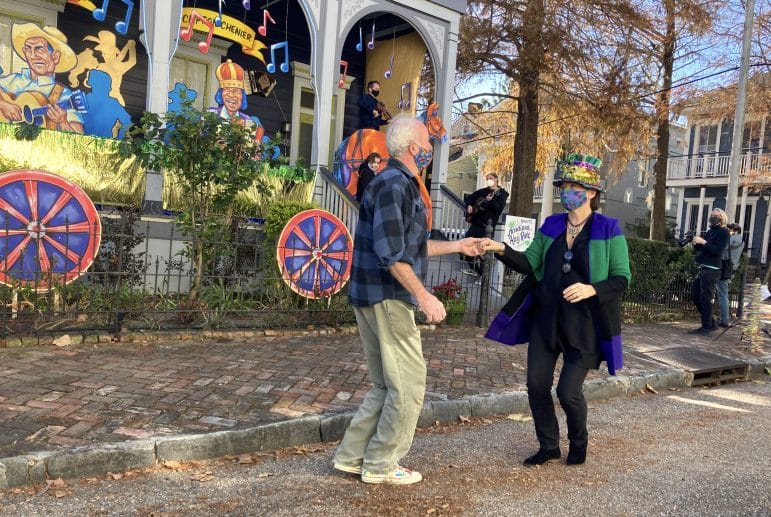 Michael and Stacey Burke dance in front of their house float.

“Here’s your Elvis outfit,” said the wife, tossing a Vegas-era Elvis Presley jumpsuit and a pompadour black wig with sideburns at her husband.

“But … uh … I don’t even like Elvis,” piped the husband from his armchair.

Bird now finds herself bestowed with the official and proper title of captain of the Lower Garden District subkrewe of the Krewe of House Floats.

Bird is what locals call an embedded native. She didn’t just move to New Orleans; she became a full-fledged New Orleanian on impact. Even her accent now sounds more Yat than Midwestern.

Frantic, manic and more than a little giddy describes Bird’s mood when she talks about Mardi Gras, especially its newest iteration: the house float.

The house float idea is the now nationally known Megan Boudreaux’s brainchild. Boudreaux, as the founder and the admiral of the Krewe of House Floats, is the newest darling of CNN, The Wall Street Journal and even Smithsonian Magazine.

As the Carnival season progresses, so great is the media’s demand for interviews with Boudreaux, the retired Big Easy Rollergirl may require a press secretary. It’s no wonder. In a world of lockdowns, her story is the kind people are drawn to.

It all started with a social media quip. Boudreaux has relayed more times than she can remember that it was all just a joke. She says that her idea of decorated houses replacing Mardi Gras parades was sparked via a Twitter exchange.

Regardless of the idea’s inception, housebound New Orleanians leaped at an opportunity to channel their bridled creative Mardi Gras energies. Transforming houses into Mardi Gras parade float replicas became a sensation across the region and has even spread across the nation among New Orleans ex-pats.

“We now have roughly 3,000 floats,” Boudreaux said. “It’s pretty overwhelming. I thought I was just going to do this in my own neighborhood of Algiers Point. Now it’s everywhere.” 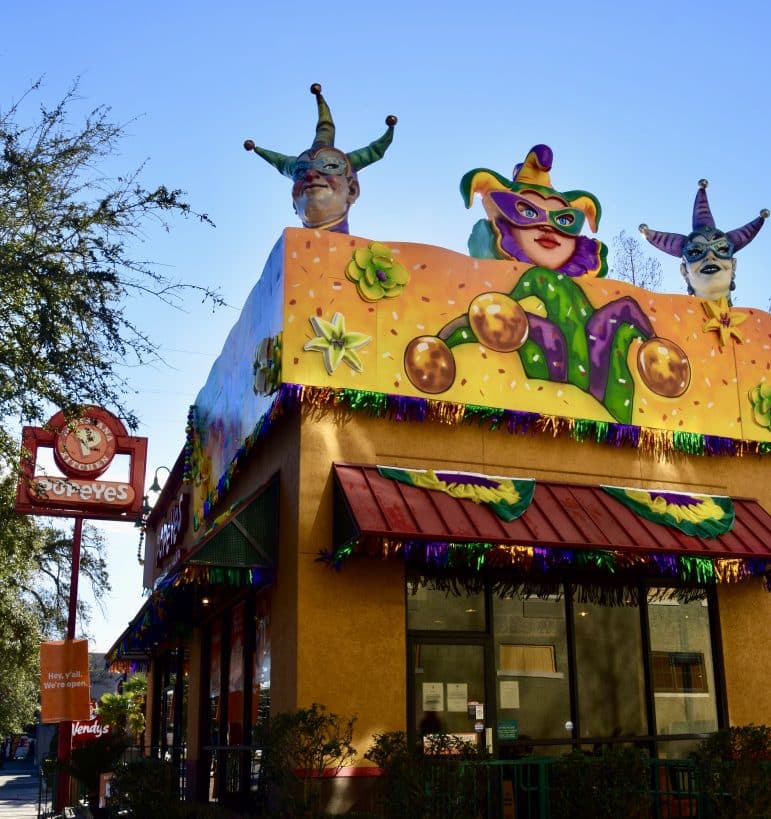 Because of the overwhelming response to the project and the hundreds of locals seeking guidance on how to proceed, subkrewes had to be employed.

Terri Bird is one of Boudreaux’s many subkrewe captains whose phones now ring off the hook.

“When I volunteered for this, there were like 30 people in the whole city,” Bird said. “That is not how it worked out.”

Bird said that she has 22 official house floats in her sub-krewe; however, she says unofficial floats are springing up around her house daily. She says she was delighted when the nearby Popeyes Louisiana Kitchen on Erato and St. Charles Avenue created a restaurant float.

Every neighborhood has a theme, and the Lower Garden District’s theme is “Let the Music Play.” She says it’s the theme that the area’s floats should follow, however loosely. 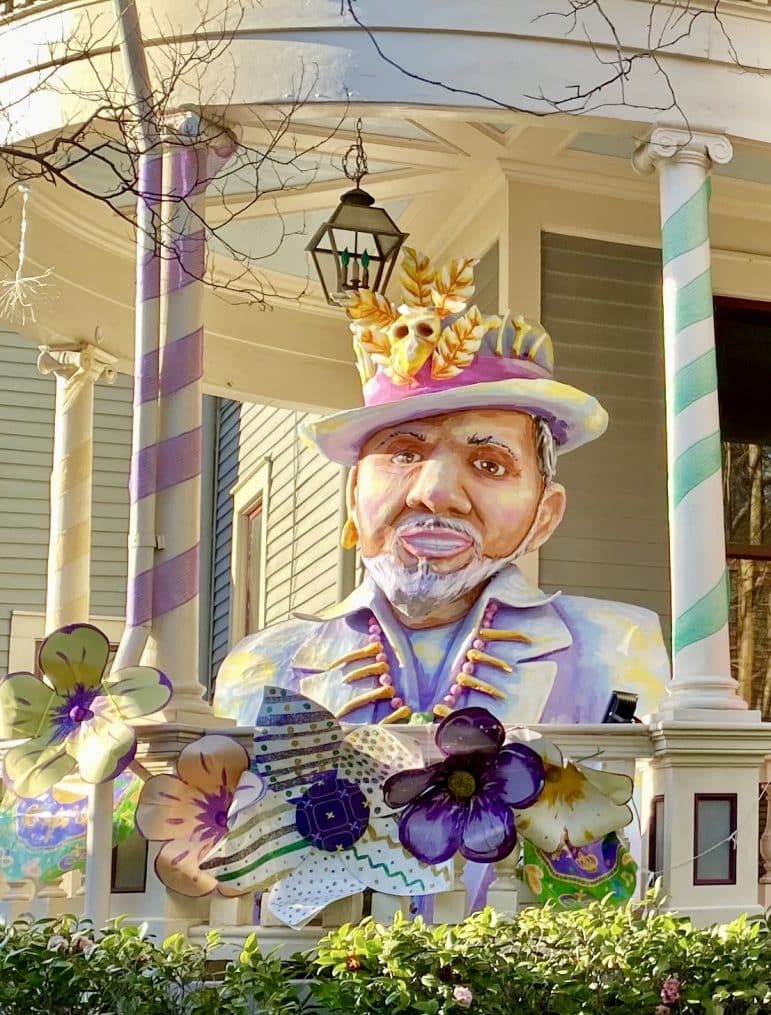 Musician Dr. John adorns the porch of the “We Think It Makes a Better World“ house float on Coliseum Square (Kristine Froeba).

One of the standout floats is on Coliseum Square. It’s entitled “We Think It Makes a Better World.” The float is an homage to Dr. John and his song, “Let’s Make a Better World” and references the turmoil of the world at large and the ongoing pandemic. 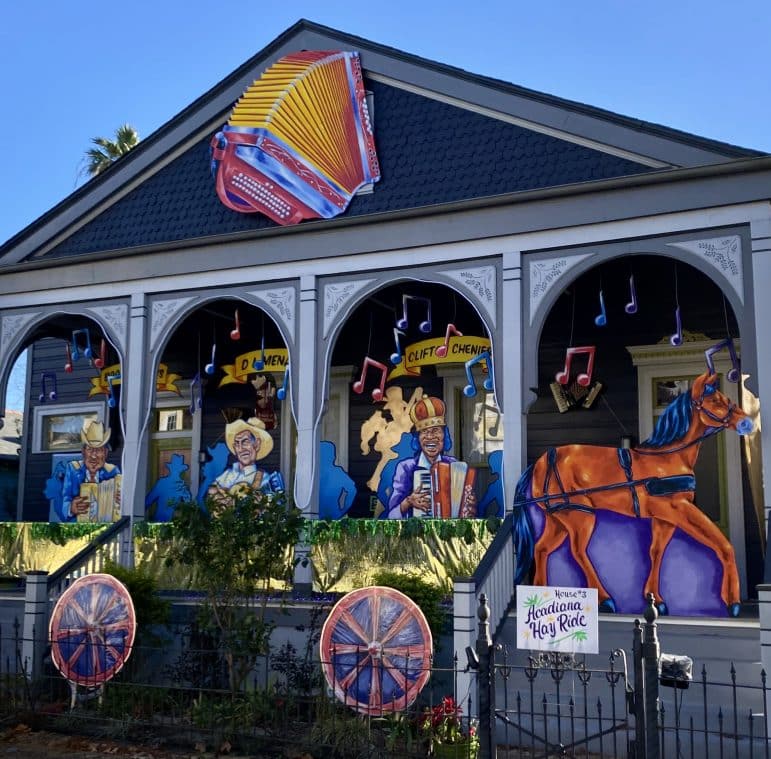 Another standout floats in the LGD is the Krewe of Red Beans funded “Acadiana Hayride” on Euterpe Street. The Krewe of Red Beans initiated a successful funding concept to create employment for out-of-work Mardi Gras artists. This house float is one of the many results of their endeavors.

The “Acadiana Hayride” house is owned by Michael and Stacy Burke. Michael Burke, a New York transplant, describes his house float as a pure joy.

“The house floats have democratized Mardi Gras,” Burke said. “Now everyone can be a player. The playing field has been leveled.” 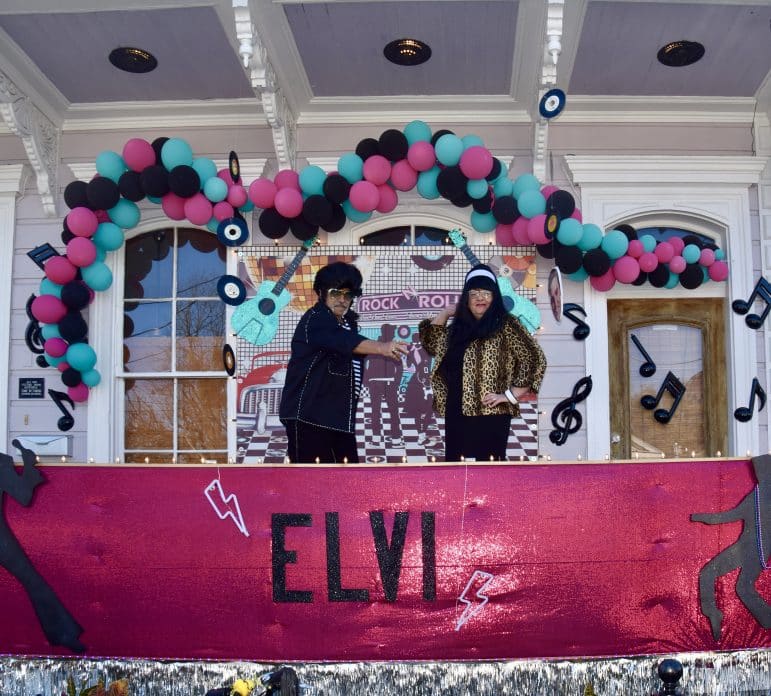 The “All Shook Up” house float on St. Mary Street pays homage to the Krewe of the Rolling Elvi. (Kristine Froeba).

As for the neighborhood captain and her husband, their float is “All Shook Up,” after the Elvis Presley 1957 hit single. Aptly named, the house float is a mélange of Elvis silhouettes, musical notes and 1950s diner images.

The float’s owners belong to the 200-member Krewe of the Rolling Elvi. Valente’s ’50s pink Cadillac scooter he normally uses for Carnival parades is part of their house float.

“My first experience of Mardi Gras was in 2001,” Bird said. “I didn’t know any better, and I watched all the parades on Canal Street.”

Bird’s first experience participating as a krewe member was in the female walking component of the Krewe of the Rolling Elvi.

“I was just an Anne Margaret in a red wig, that’s how you start out,” Bird said. “But, now I’m a Priscilla Presley, have a black wig, and ride on the float.”

As for her husband, the House Floats, Elvis and Mardi Gras, Bird said, “He loves it, all of it.”