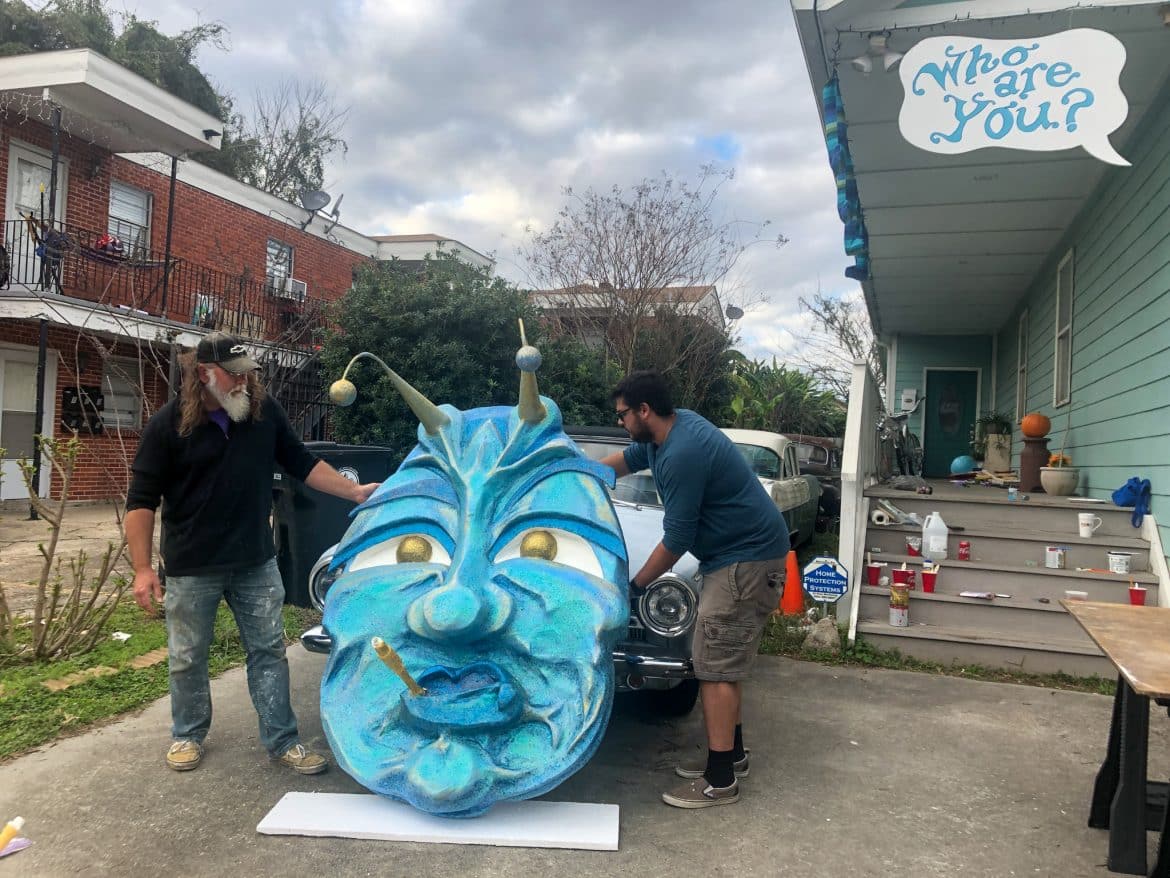 Thom Karamus, left, and his neighbor Daniel Whamond carry the head of the Caterpillar for Karamus’ house float.

Mardi Gras parades may be cancelled, but that hasn’t stopped residents of Central City from turning their neighborhood into a festive Wonderland.

Central City is one of the many neighborhoods participating in Yardi Gras, an alternative to Mardi Gras parades where homeowners decorate their own houses as floats. On the 3200 block of Dryades, for example, residents are working together to turn four homes into “Alice in Wonderland”-themed house floats.

Friends and neighbors came together on Saturday to start putting up whimsical decorations. One house was the Cheshire Cat, and the others were the Queen of Hearts, the Caterpillar and the Mad Hatter. The neighbors shared pizza and art supplies as they decorated, and music kept everyone bouncing. 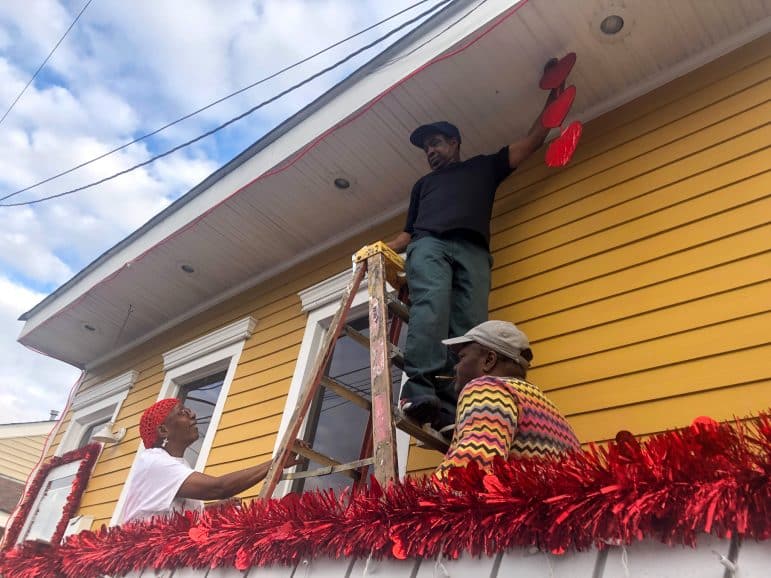 Shirley Madison decorates her home as “The Queen of Hearts,” with help from Gwendolyn Mitchell and Henry Williams.

“We have all embraced it, and we have had a lovely time,” said Shirley Madison, the Queen of Hearts. The self-proclaimed grandmother of the street, where she has lived for 20 years, Madison normally hosts a block party every Bacchus Sunday.

She said that Alice is a good mascot for the block because “she was curious, and Dryades has always been a curious street. We went from drug infested to Happy Land!” 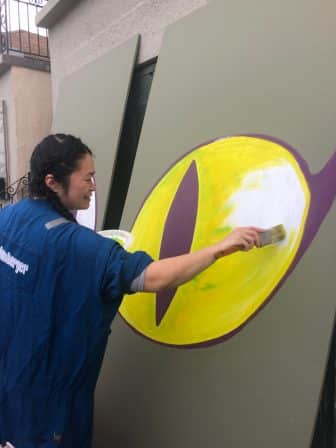 Victoria Le paints the eyes of the Cheshire Cat.

Victoria Le, who was painting the eyes of the Cheshire Cat next door, agreed that the imaginative theme fits the neighborhood.

“We’re a bunch of nerds and we want to be whimsical and silly and kind of weird,” she said. The house floats are “a reminder that, despite the circumstances, we still have this spirit.”

Across the street, Thom Karamus set up a gigantic papier-mâché Caterpillar face in his front yard.

He commissioned his friend Caesar Meadows, known for the miniature “Qomiks” found in gumball machines across the city, to create a mini-comic about the Caterpillar to give out as a throw on Mardi Gras. Bicyclists stopped in the street to wonder at the house’s transformation.

“There’s nothing I could say to explain to you how much I love my home, my neighbors, my friends … the friendly strangers on bicycles who stop and smile and cheer,” Karamus wrote later on his Instagram.

Dryades Street was not the only block participating in Yardi Gras. Down the street, the Krewe of Red Beans had created an elaborate “Night Tripper” float in honor of the musician Dr. John, featuring a grinning skull as tall as the house.

Hannah Imberman, captain of the Central City subkrewe of the Krewe of House Floats, says that the neighborhood’s theme is Central City Twilight Zone.

“This year has felt like the Twilight Zone,” said Imberman. But she’s been delighted to see neighbors who didn’t know each other very well before meet over Facebook and work on floats together.

“At a time when we’re forced to be far from each other, it’s bringing new people together,” she said. “We can’t see the people we love, but this is creating an opportunity to have new people that you love.”

Still, there is a bittersweet flavor mixed in with the joy that the house floats bring. While they show off the creative energy of the city, they’re also a reminder of what New Orleanians are missing this year.

A “Jazz Funeral” house in the 2000 block of Seventh Street, created to honor musicians who have died of COVID-19, encapsulates the ways that New Orleanians embrace both sorrow and joy.

Carolina Gallop, a Baby Doll and the owner of the house, created cardboard cutouts of Carnival revelers and decorated her home with musical motifs. She also put up a sign with the names of dozens of musicians who had passed away, including pianist Ellis Marsalis, and included space at the bottom for people to add more names if they wished.

On Saturday she dressed up in her Baby Doll outfit and invited her neighbors for king cake and sangria (as long as they stayed safe – “Nobody is going to be in front of my house without a mask on!” she said.)

Gallop decorated the house to bring some joy to the neighborhood, while also reminding people of the threat that the pandemic poses.

“I want to make it seem like you’re going by the floats and have the band playing. It makes people happy as they go by,” she said. At the same time, however, “The reason why I have this house float is because of the virus, and it’s because of the virus that we don’t have a lot of these musicians we’re paying tribute to here.” 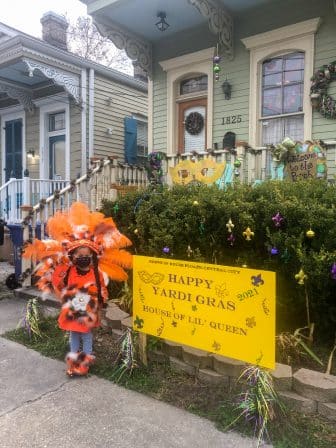 Jeremy Oatis, a high school dean who lives on the 1800 block of Terpsichore, agrees that it is “bittersweet” that there will be no parades this year, but he still plans to keep Carnival traditions alive.

His house float’s theme is “The House of Lil’ Queen” in honor of his 4-year-old daughter Cameron, who marches with him in the Original Wild Tchoupitoulas every year.

He has all her Indian outfits from the time she was an infant placed in the window, and they plan to mask in their Indian suits on the porch on Fat Tuesday.

“She lives for this. She was born in it,” Oatis said. When he asked her if she wanted to show her suit to the reporter, the little girl jumped up and down in glee and shouted, “I love Indian suits!”

They’ve been waiting over a year to debut their suits, since the 2020 Super Sunday and St. Joseph’s Day marches were canceled due to COVID. The house floats show that, this year, nothing can stop them.

“Katrina, the pandemic, give us anything you want, Mardi Gras is going to go on,” he said. “And this year it’s happening in a safe way.”

Oatis helped his daughter into an orange suit with a white magnolia in the center, and then they sang an Indian chant together. “Lil’ Queen from way Uptown – won’t bow down and don’t know how!”

Editor’s note: From its seeds in an offhand remark founder Megan Boudreaux posted on Twitter, Krewe of House Floats has quickly grown into a superkrewe, with about 11,800 members in 40 subkrewes across the metro area. All are devoted to keeping the Carnival spirit alive and providing support for locals affected by the pandemic. Throughout the season, Uptown Messenger will be visiting with neighborhood KoHF subkrewes across Uptown to see how they’re doing Yardi Gras.