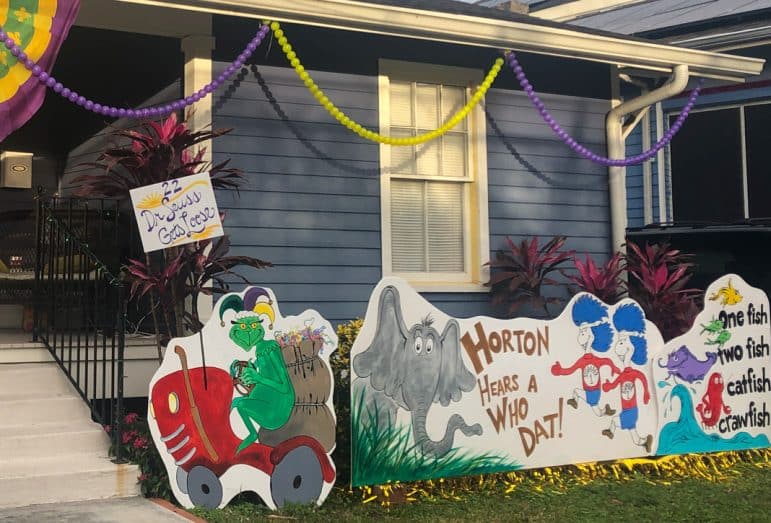 The “Horton Hears a Who Dat” house.

Parades are canceled this year, but have you no fear. Freret held a vote on a theme for house floats. They picked a theme based on Seuss, let creativity loose, and let everyone know: The theme’s “Oh, the Places You Can’t Go!”

The Freret neighborhood has become a colorful storybook as it takes on a Seussian theme for Yardi Gras, a safe alternative to Mardi Gras parades where residents decorate their own houses as floats. Imagination abounds in houses decorated in the spirit of beloved children’s books. 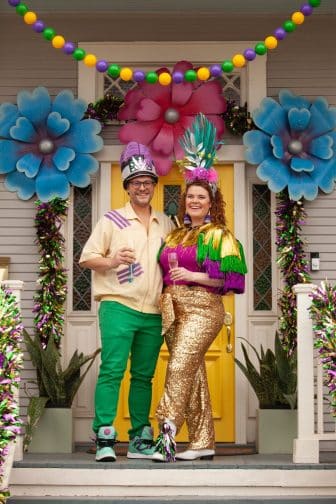 Liz Cooke and her husband Drew pose in front of their Yardi Gras house.

When given lemons, “leave it to this city to make some lemonade and put vodka in it,” said Liz Cooke, a resident of the Freret neighborhood and the owner of Lionheart Prints on Magazine Street. Cooke came up with the idea for the theme because, simply, “I can’t wait to go places.”

“I’m used to traveling every month for business or just life, and I’ve just staying put like I’m supposed to,” she said. “But I can’t wait to go see the world again. I miss the experience of being in a new culture and seeing new things outside of the four walls of our house.”

Cooke joked that she wants to “apologize to everyone for making our theme so hard,” but it’s led to an outpouring of creativity. There’s a home on the 2200 block of Jena based on The Lorax, titled “I Know What It Means to Miss Truffula Trees.”

Iacovone Kitchen on Freret Street plans to put up decorations with the theme of, “Oh, the Places You’ll Dine To-Go!” On the 2200 block of Robert Street, the Grinch pulls on a tractor and Horton the Elephant proclaims, “Horton Hears a Who Dat!” 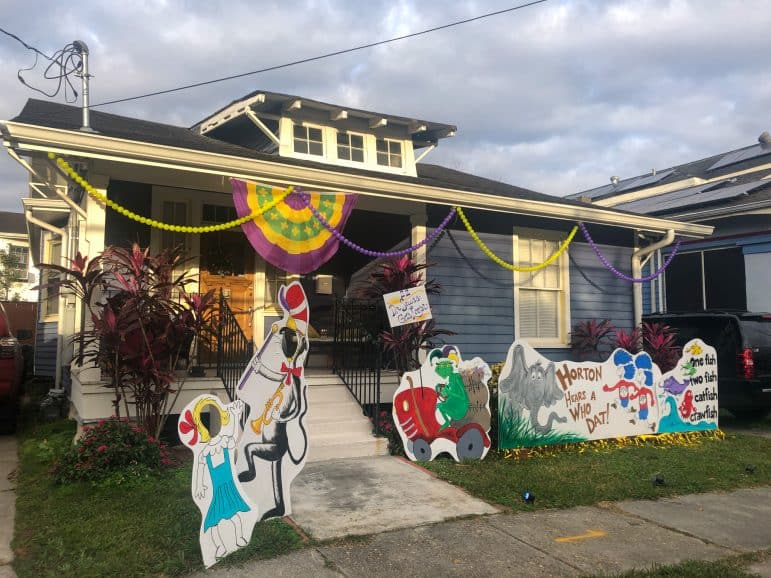 The “Horton Hears a Who Dat” house on the 2200 block of Robert Street.

Cooke has draped green, yellow and purple flags over her house, with larger-than-life flowers blossoming above her door. After a grueling year, the decorations have brought Mardi Gras colors back to the neighborhood and instilled it with a sense of the Carnival spirit.

“Mardi Gras is so important to all of us,” Cooke said. “We all need this time to celebrate. It’s in our bones.”

One of the most elaborately decorated houses features over a dozen parody book covers by America’s other favorite doctor, Anthony Fauci. Based on the designs of graphic artist Jim Malloy, the house is on the 3200 block of Napoleon and features humorous titles like How the Grinch Stole Graduation, The Cat in the Hazmat, Hop on Pop’s Zoom Call and Horton Hears the W.H.O., i.e., the World Health Organization. 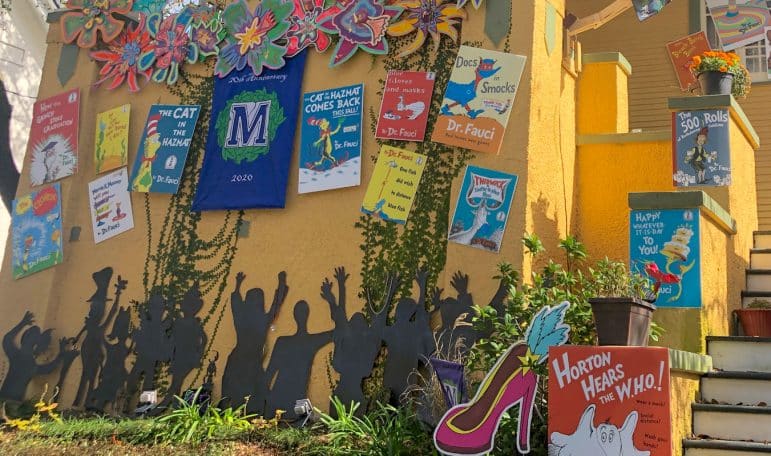 Cooke said she hopes that the house floats become a permanent tradition on Mardi Gras.

“To see this outpouring of creativity and earnestness, celebrating the culture of the city in this new way is so amazing, and I know it’s going to stick around,” said Cooke.

Michelle Ingram, owner of the animal shelter Zeus’ Rescues and pet boarding business Zeus’ Place, is co-captain of the Freret krewe, which is a group within the larger Krewe of House Floats.

Partnering with the Greater New Orleans Foundation, the subkrewe plans to raise funds to support Culture Aid NOLA’s food drives and Grace at the Greenlight’s efforts to support homeless people. It is also encouraging homeowners to hire local designers to create house floats, so that those businesses will still be around when the parades come back next year. 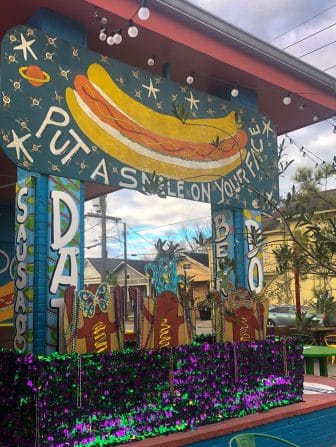 While supporting local businesses is one of the goals of Yardi Gras, organizers understand that not everyone can hire a professional float maker and put up life-size dinosaurs in their yards, as one house has done on St. Charles Avenue. Instead, many people have created floats themselves, discovering artistic skills they didn’t know they had. Ingram says that Freret’s DIY sensibility is what makes the neighborhood stand apart.

“Freret is really self-made,” she said. “It pulled itself up by its bootstraps in 2006 and reinvented itself. Our house floats reflect that. They’re not fancy or extravagant. They represent the people who made them. You can see a bit of personality in each of the floats.”

Ingram knows that some neighbors were nervous about how their house floats would look in comparison to some of the most creative and extravagant floats across the city. She encourages people to still participate even if it’s just in small ways, because “it’s still decorating and it brings that sense of community,” she said. As more and more neighbors  decorate their homes, she says, people have realized that it’s not a competition.

“As long as you’re there and you’re part of it, it fits together and it’s New Orleans,” she said. Even if all someone does is put out a flag or drape some beads on their fence, it all contributes to the Mardi Gras spirit: “Whether it’s a two-story-tall Brontosaurus or a Horton Hears a Who Dat, it all kind of works.” 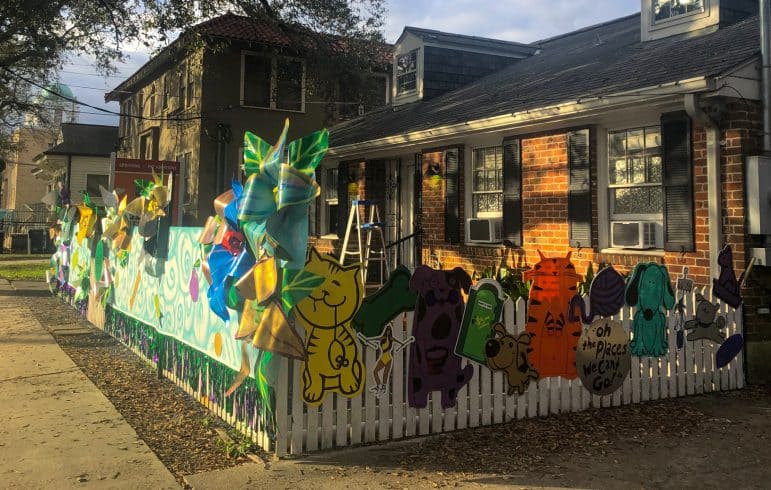 Zeus’ Rescues is decorated with larger-than-life dogs and cats.

The picket fence around Zeus’ Rescues on Napoleon is decorated with colorful cut-outs of dogs, cats and flowers. There’s sign in front of the building that says “No Parking, Parade Route,” which is now sadly unnecessary, but the neighborhood has found a different way to celebrate without the parades.

As a sign outside one of the house floats proclaims: “We have throws in our hands, we have glitter in our veins. They may cancel parades, but our spirit remains!”

Editor’s note: From its seeds in an offhand remark founder Megan Boudreaux posted on Twitter, the Krewe of House Floats has quickly grown into a superkrewe, with about 11,800 members in 40 subkrewes across the metro area. All are devoted to keeping the Carnival spirit alive and providing support for locals affected by the pandemic. Throughout the season, Uptown Messenger will be visiting with neighborhood KoHF subkrewes across Uptown to see how they’re doing Yardi Gras.

See here for the Krewe of House Floats map.