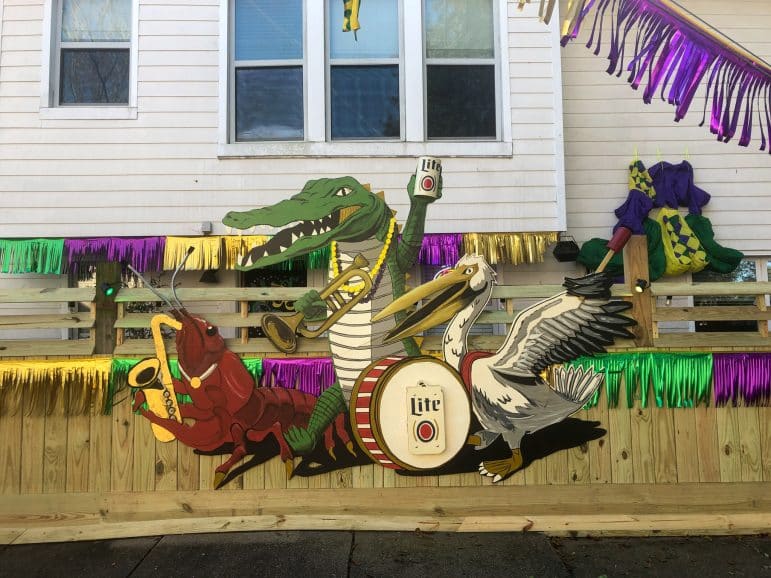 An animal second-line on Fontainebleau Drive.

Plans to travel the world in 2020 and 2021 may have been put on hold, but you can always make your own “staycation” at home. That’s the theme that neighbors in Broadmoor, Fontainebleau and Marlyville chose for their Yardi Gras house floats.

“We’re aware of the irony and the reality that we can’t have Mardi Gras in its normal incarnation. We can’t just go on vacation if we want to model good public health choices,” said Caitrin Gladow, captain of the neighborhood subkrewe. It’s part of the larger Krewe of House Floats, a citywide effort to encourage people to decorate their own houses as floats since parades cannot roll because of COVID.

The goal of the house floats project is to have fun, support artists who are out of work, and help neighbors in need. “One of our obligations as neighbors is to look out for one another,” Gladow said.

The pandemic has created economic devastation, and many families are struggling to put a meal on the table. Feeding Louisiana estimates that one out of five households with children in Louisiana are facing “severe food insecurity.”

In response, the Broadmoor Improvement Association has given out food through a pantry and garden at the Broadmoor Community Church and a communal fridge at Washington Avenue and Tonti Street.

To kick off the Mardi Gras season, the neighborhood held a food drive the week before Epiphany (Jan. 6) and collected over 450 pounds of dried goods. The Krewe of House Floats is also working with Culture Aid NOLA to support its food distribution efforts and the Greater New Orleans Foundation to help people who have been unemployed because of the pandemic.

“It’s wonderful to see the creativity of our neighbors,” Gladow said. “It’s also incredibly cool to see what people are doing to help other New Orleanians thrive during an impossibly difficult time.”

Gladow said that the Broadmoor, Fontainebleau and Marlyville neighborhoods are known for their creative Halloween decorations, so it’s no surprise that more than 80 houses are participating in the Krewe of House Floats.

“You have some neighbors who are very creative, can whip up masterpieces with a Cricut and a jigsaw,” she said, referring to tools that are used to cut wood or other materials into intricate shapes. 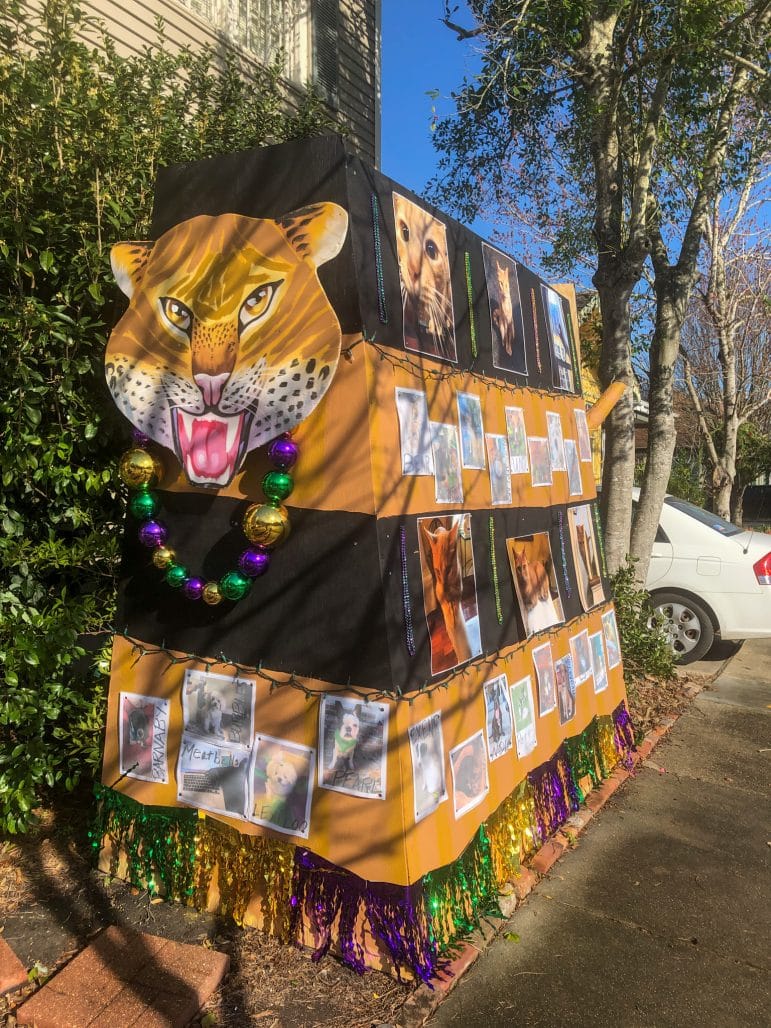 Neighbors submitted pictures of their pets to adorn this ode to pandemic companions on State Street Drive. 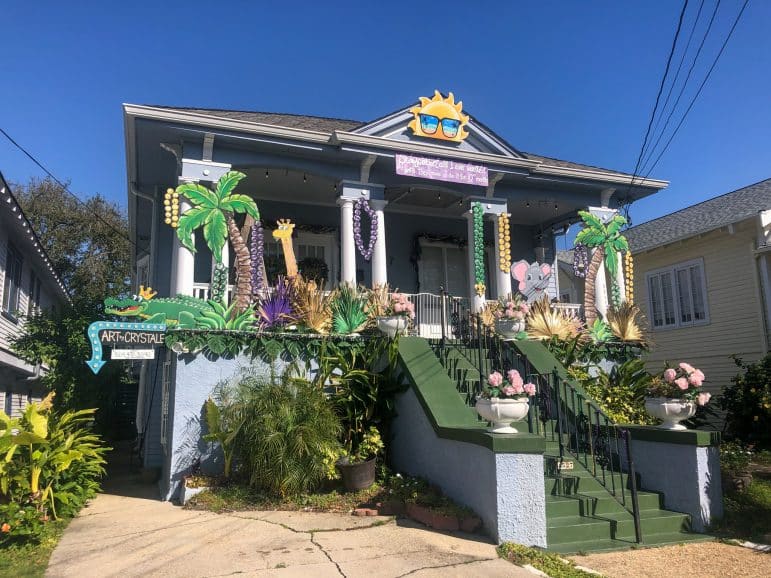 This house on South Rocheblave follows the neighborhood’s theme of “Staycation, all I ever wanted — until they made us do it for 10+ months.”

Creative house floats include an ode to the pets who have helped gets us through on the pandemic on the 4100 block of State Street Drive and a “Home Sweet Home” float on the 4400 block of Fontainebleau, festooned with giant lollypops and mouthwatering truffles the size of beachballs.

On the 4500 block of South Rocheblave, the artist Crystal Obeidzinski has painted palm trees and exotic animals around her house float, and also put up a sign: “Staycation, all I ever wanted — until they made us do it for 10+ months.”

For creative professionals who have lost work because of the pandemic, the house floats are a great opportunity to once again flex their imaginative muscles. Leslie Holder and Jennifer Craft, photographers who live at the 3300 block of Robert Street, have gone all-out with their “Party Like a Flock Star” house float, which they describe as a “flamingo disco party at the Grammys.” 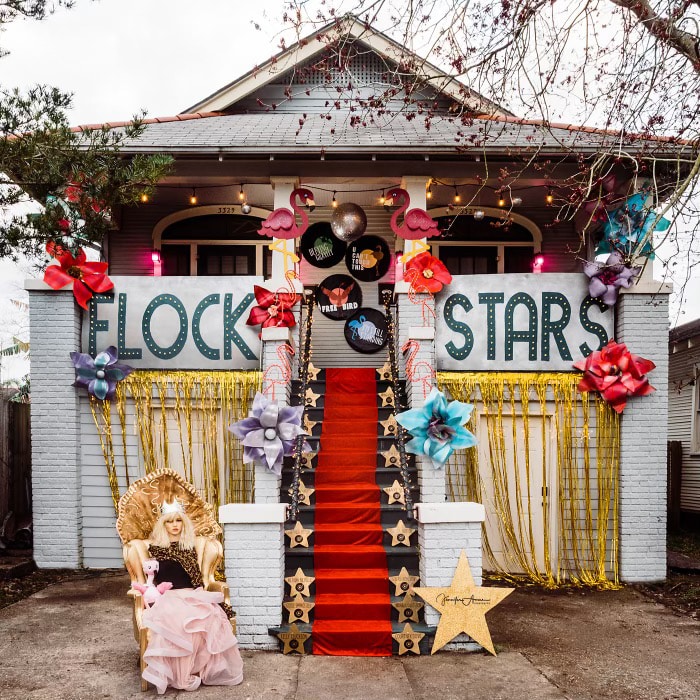 Leslie Holder and Jennifer Craft describe their house as “a flamingo disco party at the Grammys.”

“We thrive as creatives, and this has given us a great outlet,” said Craft.

The words “Flock Stars” light up their porch at night, and the stairs going up to the second floor are now a red carpet bordered with stars like the Hollywood Walk of Fame. All the stars are bird puns, like Mahalia Quackson, Courtney Dove, Heron Neville and Tweet Crude.

Holder and her mother were formerly in the Mystic Krewe of Nyx and planned to throw pink flamingos in the 2020 parade. However, they didn’t get to ride due to last year’s tragic float accident. They had to figure out what to do this year with 200 fluffy flamingo toys.

“They filled up my whole car. Three full tubs of flamingos,” said Holder. They plan to throw them to visitors from the second-floor porch. There will also be selfie stations on the ground floor, and when Mardi Gras is over, they’ll reuse the props and decorations for their photography business, Jennifer Anne Portraits.

Mardi Gras revelers can see another eye-popping house float on the 8000 block of Nelson. The theme is “Purple, Green, and Golden Girls,” an ode to the beloved 1980s sitcom. Stronghold Studios created larger-than-life cutouts of Rose, Blanche, Dorothy and Sophia to strut across the home. 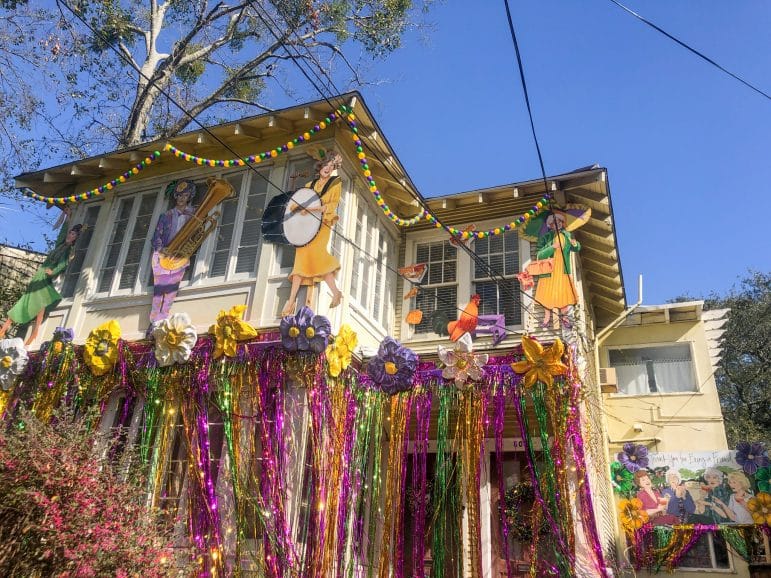 Greg Kata, an actor with more than 200,000 followers on the social media platform TikTok, knew that he wanted to support local artists.

“I was mourning the loss of Mardi Gras and what that meant for the city,” Kata said. He realized that with his devoted social media following, “we could raise a lot of money and put these artists back to work.”

He raised over $13,000 in three days from his TikTok followers, then used the money to hire Stronghold Studios and a band for Mardi Gras day. He also bought over 100 prepared meals and bottled water for community fridges across New Orleans.

“It was 100% possible because of TikTok. So I jokingly call it the House that TikTok Built,” Kata said.

It took about two weeks to put the whole project together. Kata’s followers voted on the theme. “I love a pun, I love a play on words, and I love the Golden Girls,” he said.

He chose Stronghold Studios because it’s a family business that is “steeped in New Orleans culture.” The studio usually creates decorations for Jazz Fest, but COVID wiped away all its main sources of revenue.

“This wasn’t about decorating my house. I wasn’t going to do this if I couldn’t do it right,” said Kata. “The point is that there are so many artists and vendors affected by [Carnival parades] not happening.”

Stronghold had only one job from March to the beginning of December. They were close to shutting down, but Yardi Gras has given them the chance to revive their business and build house floats across the city.

“True artists are those that know how to pivot with the times,” Kata said, “and have the tenacity to keep being artistic.”

One thought on “Yardi Gras Stories: Broadmoor and Fontainebleau enjoy a ‘staycation’”