In the golden era of politics, political campaigns were an opportunity for voters to meet the candidates and hear what they had to say about the major issues of the day. Citizens often voted for the candidate they thought would best improve their lives.

Today’s campaigns are more like guerilla skirmishes where opposition research specialists mine an opponents’ history and relationships for whatever dirt they can find. In this year’s race to replace U.S. Rep. Cedric Richmond, candidates’ friends are also diverting attention away from the real issues.

For example, why would City Councilman Jay Banks waste his time going over to the home of congressional candidate Belden Batiste even if he thought Batiste was “in crisis”? Batiste doesn’t even live in Banks’ district. Batiste criticized state Sen. Karen Carter Peterson earlier this week at the Alliance for Good Government forum. That’s politics. 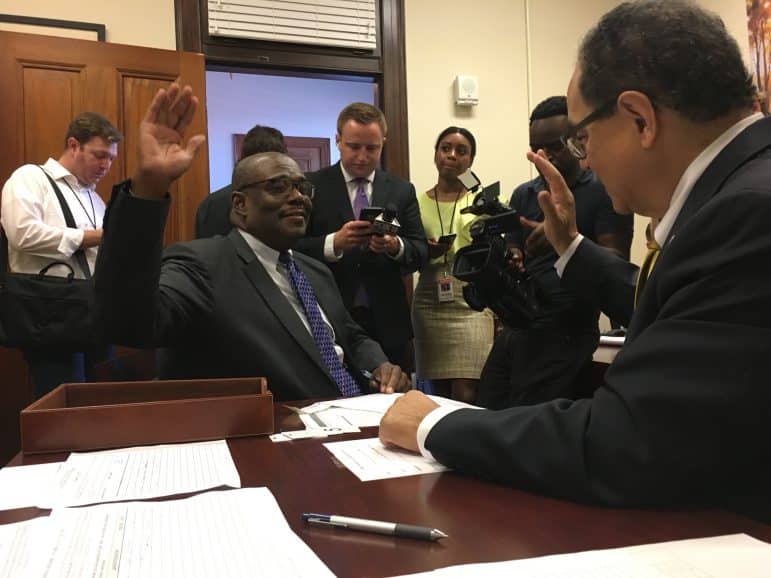 Jay Banks, surrounded by reporters, qualifies to run for his City Council District B seat in 2017. 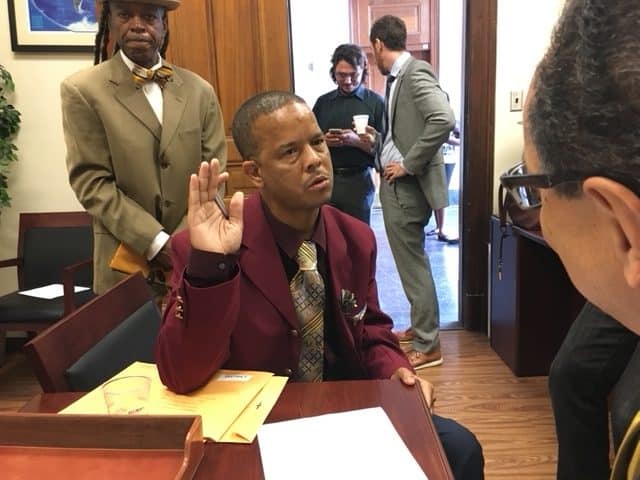 Belden Batiste qualifies to run for City Council in 2017. He later dropped out of the race.

Batiste’s candidacy won’t keep Carter Peterson from making the runoff. If Banks really thought Batiste was struggling, perhaps calling in a social worker would have been more appropriate. Instead, the two got into a yelling match that led to a summons and court appearance.

Already over-burdened and understaffed, the NOPD had to waste precious time writing reports — time that could have been much better used investigating crimes like shootings, car break-ins and carjackings. In addition, the public’s attention was needlessly diverted from the real issues: COVID-19, unemployment and rebuilding the economy. It was great publicity for Batiste, a perennial candidate who lacks the financial resources to wage a robust campaign, but not so good for Banks, a respected leader in the community.

This ugly mess also rubbed off on Carter Peterson, who is in what can only be described as a real dog fight against state Sen. Troy Carter. Led by Vice President Kamala Harris, lots of women — especially women of color — have recently assumed greater roles in Washington. Carter Peterson has always dreamed of being able to break into Louisiana’s all-male congressional delegation. To do that, she has been relying on broad support from women voters.

Unfortunately for Carter Peterson, the Independent Women’s Organization, which she and her mother Gwen “Gigi” Carter have belonged to for many years, only delivered a dual endorsement for her and Troy Carter. The seven-hour endorsement meeting created a great divide among the members with numerous roll-call votes and plenty of behind-the-scenes maneuvering.

Carter Peterson has always been a favorite of IWO and frequently worked with them in Baton Rouge on women’s issues. By targeting women voters, Carter is following the lead set by District Attorney Jason Williams when he defeated former Judge Keva Landrum in the recent DA’s race. Like Williams, Carter has built a network of hundreds of women supporters. He also touts his many years as a dependable champion of women’s causes at the State Capitol.

Carter has moved on from the negative headlines about a blighted property he owns in Algiers. Perhaps the neighbors who initiated the complaints would have preferred to own the property themselves and make their own tenant selections.  His consultants believe the blighted property issue will fade away as the campaign focus moves to targeted videos and television spots. Carter Peterson is also expected to be up on television soon.

Considered to be running third because of his strong fundraising and social media acumen, Baton Rouge activist Gary Chambers Jr. has been creating his own problems as well. Chambers hosted a small drive-up rally in New Orleans last Saturday that featured Shaun King, a nationally known Black Lives Matter activist and social media giant with millions of followers. King was a prominent surrogate for presidential candidate U.S. Sen. Bernie Sanders.

Popular in many circles, King is also considered controversial. Critics claim that King is a prolific fundraiser but a poor manager who is often unable to account for how dollars are spent. Similar to accusations brought against former Spokane, Washington, NAACP president Rachel Dolezal, King has also been called out for self-identifying as black. While King’s Kentucky birth certificate indicates both parents are Caucasian, King claims that his actual biological father was a light-skinned black man.

Chambers, a favorite of progressive voters, did not pay King for his campaign appearance.  He considers King a friend who has spent “thousands of dollars” helping Chambers’ efforts in Louisiana for years. “Is Shaun perfect? No. None of us are. Has he made mistakes? Yes. We all do. I wholeheartedly support Shaun because I know he’s not what the internet says he is,” Chambers said.

He must have received considerable push back about King’s visit to Louisiana. On Tuesday, Chambers posted a message on Twitter deflecting criticism of King. “Let me go ahead and just say, miss me with the @shaunking hate.” 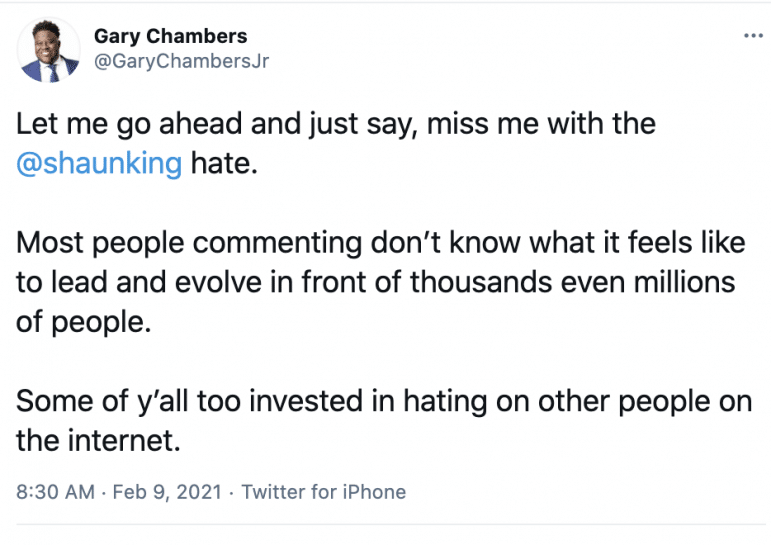 With 15 candidates in the race, not all will make the runoff.  But two first-time candidates are getting positive responses from voters – Latina small-business owner Desiree Ontiveros and 24-year-old J. Christopher Johnson, founder of Mobilizing Millennials.

Forum attendees have been impressed by Ontiveros, a Texas native who lives in the French Quarter and built her iconic Badass Balloon Company without outside financial support. Ontiveros’ experiences as a woman of color have formed her perspective on many key issues. A progressive, she has the charisma to cut into Carter Peterson’s votes and might even earn some organization’s endorsement.

Johnson says he was inspired by the late Congressman John Lewis. “When I think of John Lewis as a young man getting in politics, it fuels my participation and excitement,” he explained. Known as “J” to his family and friends, Johnson is completing coursework for a master’s in Urban Planning at UNO.

A graduate of Dillard University, Johnson works at his alma mater as an admissions counselor. He attends St. Matthew United Methodist Church in Algiers and resides in Gretna. Johnson says he serves on two Tulane University advisory boards that focus on HIV prevention and addressing vaccination issues in Black and Brown communities.  Johnson, who will turn 25 on Saturday, will be introducing himself to voters on Feb. 26 at the Case Closed Barbershop in New Orleans East.