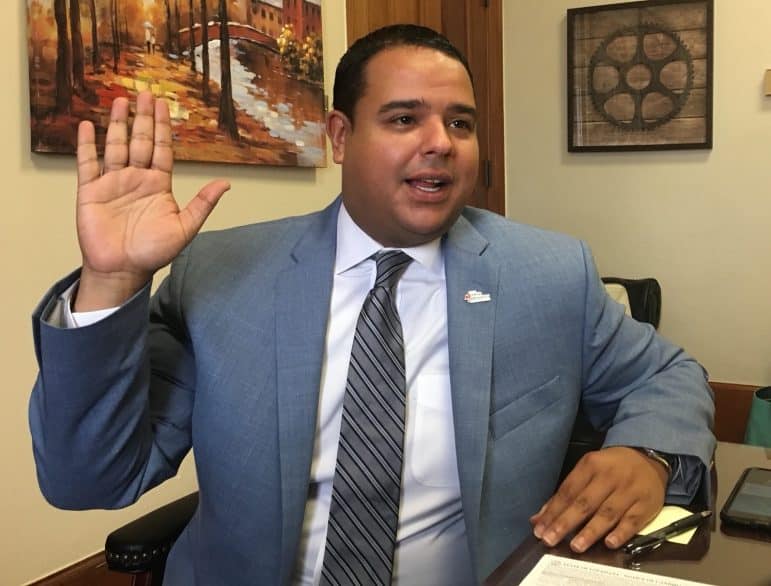 Jared Brossett qualifies to run for City Council on July 18, 2018.

District D Councilman Jared Brossett almost has as much cash on hand in his campaign account than all the other council members combined. Brossett, who is term limited and expected to run for an at-large City Council position later this year, reported $103,471.61 in available dollars on his 2020 annual campaign finance report, which was filed last week.

Brossett started 2020 with $102,178 in the bank and took in $1,750 during the year. Though his only donation in 2020 was to St. Augustine Church, Brossett’s 2019 expenditures included Biden for President, Kamala Harris for the People, JBE for Louisiana Leadership PAC and the McDonogh 35 Alumni Association.

District A Councilman Joe Giarrusso has the second largest war chest with $67,951.50.  Though he received four donations in 2020, Giarrusso enjoys a large number of previous contributors he can tap, including Paul and Donna Flower, Darryl Berger, the Wrong Iron beer garden, the Velvet Cactus as well as lawyers Morris Bart, Blake Jones, Darleen Jacobs-Levy and the Stanley Reuter law firm. Giarrusso made donations to Children’s Hospital, Temple Sinai, the Carrollton Holly Grove Senior Center and Friends of the Lafitte Greenway.

District B Councilman Jay Banks took in $25,000 in contributions in 2020 by way of two separate donations, one for $20,000 and another for $5,000. The source of both donations was identified as “TBA, TDBA, New Orleans, LA 70119.” Campaign finance laws require that donors’ names and addresses be listed on campaign finance reports. There is also a contribution limit of $2,500 per donor per election.

In 2019, dues to the Zulu Social Aid and Pleasure Club were among the expenditures. Banks served as King Zulu in 2016 and is on Zulu’s Board of Directors. Banks also charged off dues to Omega Psi Phi fraternity, the Prince Hall Mason’s Acacia Lodge 248 and the Mystic Krewe of Louisiana in 2019.

District E Councilwoman Cyndi Nguyen did not raise any funds in 2020 and only reported $4,616.44 cash on hand. She spent more than $3,000 in 2020 on gas, food and charitable donations. Her top contributors include Adams & Reese, Air Products and TKTMJ, a service disabled-veteran-owned construction company.

City Council President Helena Moreno finished 2020 with $10,353.07 in the bank after having received one campaign contribution and selling her slightly used legislative office furniture to state Rep. Polly Thomas.

According to Haynes’ Linked-In profile, she is the owner of Friends Salon hair salon and Taste This! sno-ball stand in New Orleans’ Seabrook neighborhood. Haynes’ profile also lists her as the beauty and health educator for Delta Sigma Theta sorority and the Mystic Krewe of Femme Fatale. A Femme Fatale official said Haynes presented two talks on fashion to krewe members but does not belong to the organization.