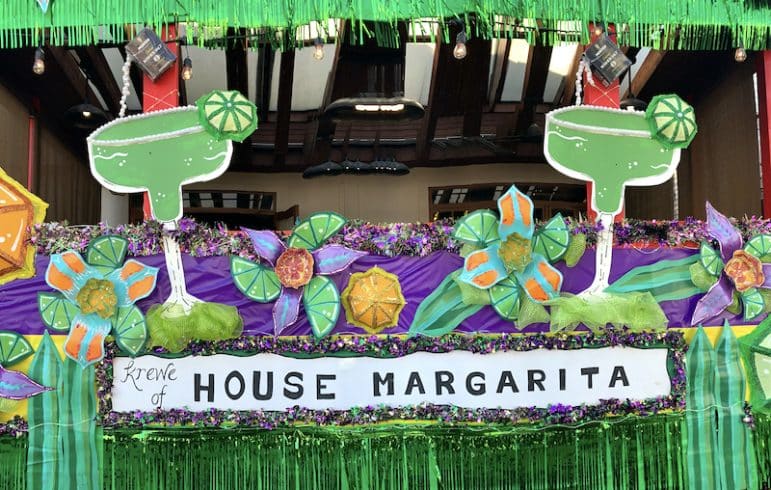 Del Fuego is part of the Krewe of House Floats’ Audubon Riverside subkrewe.

Two more storefront floats have appeared along Magazine Street this week – at Del Fuego Taquería and McEnery Residential. One is part of the Krewe of House Floats subkrewe for the Audubon Riverside neighborhood, and the other joined up with the Krewe of Read Beans’ “Hire a Mardi Gras Artist” project.

Chef Dave Wright at Del Fuego Taquería summed up their decision to make a storefront float this way: “We’re all really going to miss the parades this year, so when the Krewe of House Floats was formed, we jumped on the idea of celebrating Mardi Gras in our neighborhood. Our ‘Krewe of House Margarita’ is where it’s at!”

The Del Fuego staff used the Margarita as their inspiration for the DIY float. “We all collectively came up with creative ways to incorporate the ingredients we use to make our fresh-squeezed house Margaritas without breaking the bank,” Wright said.

The homemade float flowers’ leaves are painted lime wedges, and the parasols are glittered citrus wheels. Ginger leaves from the backyard garden are used for foliage. Pearly Mardi Gras beads are sprinkled on the rim, like they fell from the giant boxes of kosher salt.

“It not only pops during the day, but at night, the 80 feet of LED light show makes it feel like Mardi Gras,” Wright said. 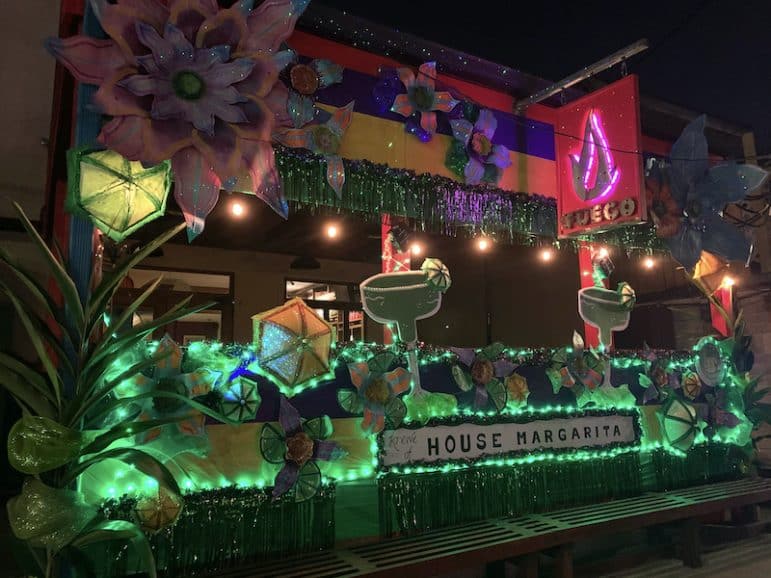 Del Fuego used the neighborhood theme, “There Is a House in New Orleans,” for inspiration.

Since restaurants like Del Fuego are at limited capacity and generating lower than normal income for the business as well as the staff, they decided to utilize their own artistic abilities.

Using three used float flowers they purchased from Phil’s Floats in Westwego, they hand made the rest of the flowers as well as the citrus wheels and Margaritas. The owners paid the staff for their contributions in order to help with cost of living during these crazy times.

“The sense of community that has come out of Krewe of House Floats continues to blow my mind,” Guidry said. “The use of the word ‘house’ in float themes — such as Del Fuego’s ‘House Margarita’ — makes businesses feel that much more a part of the neighborhood, in a time when many of them are struggling. The people and businesses in New Orleans needed this desperately — not just for revenue but for healing and hope.”

Wright echoes the thought. “We are a member of the KoHF Audubon Riverside neighborhood. Captain Courtney Guidry has been awesome coordinating everyone.” The storefront float proudly displays their Krewe of House Floats logo and cleverly interprets the “There Is a House in New Orleans” theme.

In addition to their Carnival installation, Del Fuego is a scanning site for the Muses’ Stilotto to win a glitter shoe, and the restaurant is hosting a Boozy Brunch both on what would be Thoth Sunday, Feb. 14, and on Mardi Gras Day. 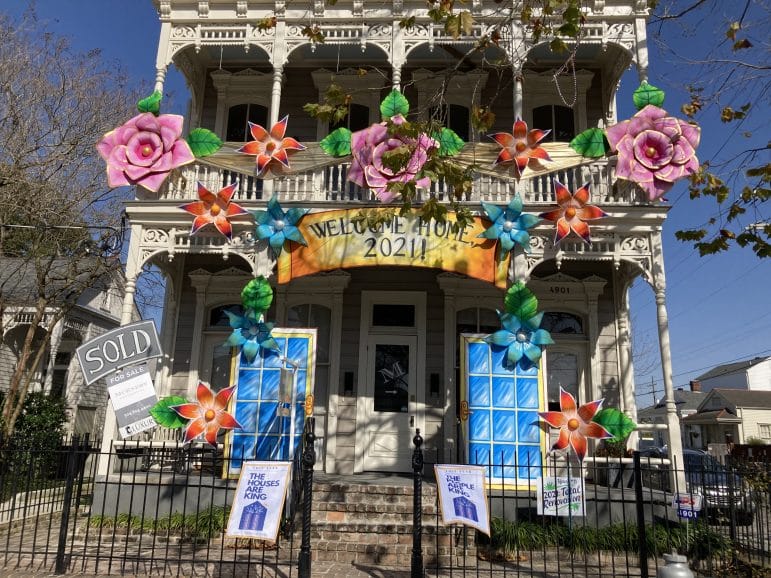 The theme for McEnery’s house float is “2021 A Total Renovation.”

At McEnery Residential, everyone loves Mardi Gras. In the business of selling houses, they have a lot of faith that 2021 will turn out to be a better year. Their float theme is “2021 A Total Renovation,” with a “Welcome Home” message. It features a 2020 dumpster fire on the side of the building.

Their installation is part of the Krewe of Red Beans’ “Hire A Mardi Gras Artist” project, and artist Sean Gautreaux, with Royal Artists experience, handled the design and installation. Parke McEnery said they were really involved in the design process.

“Sean Gautreaux has been amazing,” McEnery said. “My father worked with Sean in the past, and it was really reassuring to get that vote of confidence in his incredible abilities. The process has been your typical concept development, proof review, tweaking and final approval.”

Gautreaux said that, despite the loss of work due to parade cancellations, he’s been having a good Carnival season.

“It has been wonderful because of these house float projects,” he said, while installing the McEnery house float. “I am working and overseeing a number of them and it makes me happy.” 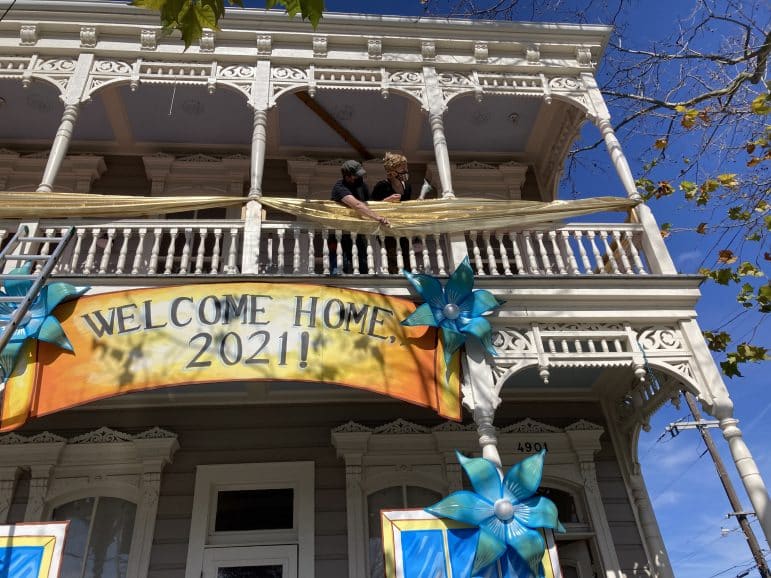 “We are so pleased that both residents and businesses have come on board for this idea,” DeWulf said. “All these creations are making our city feel festive, like we are not missing out on as much with parade cancellations.”

McEnery knows something about renovation. The building at 4901 Magazine St. had been sitting empty for years and prior to their occupancy, was in need of a complete renovation.  They moved in August 2018, as the historic renovation was nearing completion, and use the stately Victorian as the main office for the boutique residential brokerage company with 54 licensed real estate agents.

Like many other businesses along the parade route, the team opens the office to families, friends, clients and colleagues for each parade that rolls on Magazine Street. That is, until 2021.

Decorating the building as a storefront house float was an easy decision for McEnery. “Making an active contribution to the Carnival experience in New Orleans is a priority for our company,” he said.

They aren’t letting canceled parades keep them from celebrating. On Feb. 14 from 11 a.m. until 2 p.m., they will host socially distant “Porch-Traits” for people to have their picture taken in front of the float.  It will feature the Young Pinstripe Brass Band and king cake.

“We think it is so exciting that the Magazine Street corridor has become a hot spot for house floats,” McEnery said. “Magazine Street is the heartbeat of Uptown, so rest assured that will remain the case – even this Mardi Gras.” 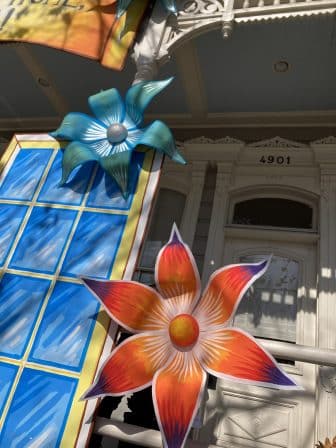