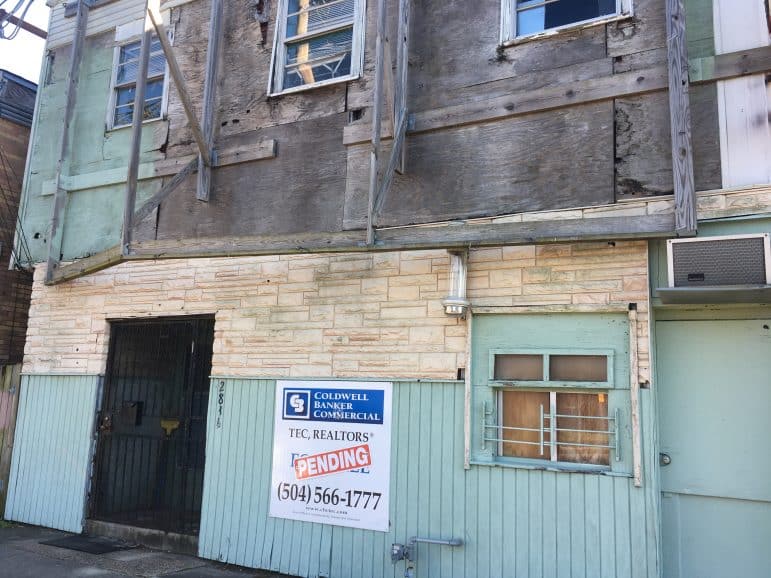 The City Planning Commission was especially enthusiastic over Docket 021/21 at this week’s meeting.

“I want to thank you for making me cry at a CPC meeting,” said a smiling Commissioner Sue Mobley, seconding a motion to approve the developers’ request. After a round of enthusiastic “yeas,” Commissioner Kyle Wedberg said: “I’m very excited to make this unanimous.”

This unanimous vote was not for just any conditional use to permit a hotel with live entertainment in the LaSalle Street Overlay District, with nine provisos. It was for the Dew Drop Inn.

The Dew Drop, the city’s leading Black music venue for three mid-century decades, holds a hallowed position in New Orleans cultural history, in rock ’n’ roll and rhythm-and-blues history, and in the hearts of many musicians. Little Richard loved it so much he wrote a song about it: “(Meet All Your Fine Friends at) The Dew Drop Inn.” Ray Charles loved it so much, he moved in for a while.

“The first time I met Ray, he was living at the Dew Drop hotel,” said local songwriter-musician-producer Allen Toussaint during a Dew Drop tribute at the 1991 Jazz Fest. “My first big gig was playing in the Dew Drop Inn house band in 1956.” If you were anyone in the New Orleans music scene at the time, you played the Dew Drop nightclub, nicknamed the Groove Room.

Despite the Dew Drop’s renown, the attempts to revive it so far have fallen flat. Curtis Doucette Jr., the lead developer behind the current plans, said he kept hearing from people that he should look into the Dew Drop. So one day he stopped in at the ramshackle building at 2836 LaSalle St. and met co-owner Kenneth Jackson.

“I fell in love with the place,” Doucette said. “You can’t come into that building and not see it for the treasure that it is.” 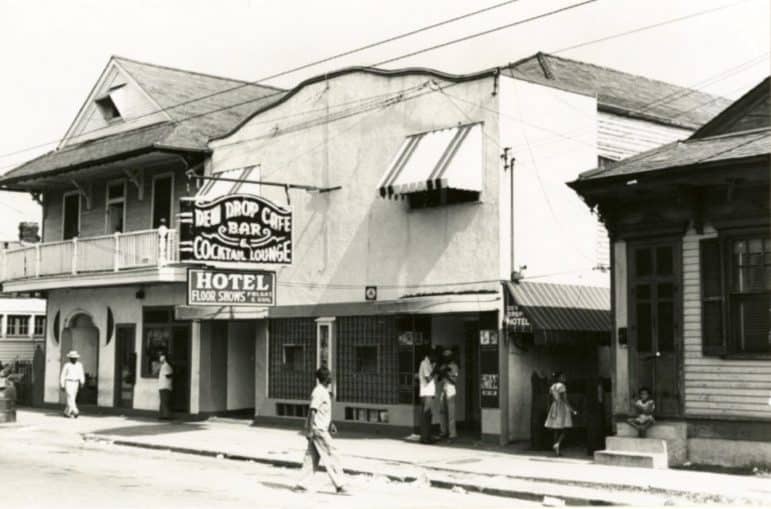 ‘Meet you at the Dew Drop Inn’

The Dew Drop Inn was owned by a Frank Painia, Kenneth Jackson’s grandfather, who ran a barber shop in the building during the Depression. He opened a hotel in the late-1930s and added a nightclub in the 1940s. Painia’s brother operated a restaurant, known for its red beans and rice, next to the club.

Like other cabarets on the “Chitlin’ Circuit,” venues for Black entertainment in the Jim Crow South, the Dew Drop hosted luminaries such as Duke Ellington, Nat King Cole, James Brown, Ike and Tina Turner, Otis Redding and Sam Cooke — along with a floor show featuring vaudeville-style acts like comedians, magicians and a peg-legged tap dancer.

As stated in countless interviews, the Dew Drop gave the young local players a chance to learn from older musicians and to hone their chops during legendary all-night jam sessions. At the Dew Drop, they developed the distinctive New Orleans R&B sound and formed a tight musical community.

The Groove Room also holds a place in the city’s LGBTQ history, thanks to popular emcee Patsy Vadalia. A singer, dancer and female impersonator, Vadalia hosted the New Orleans Gay Ball at the club every Halloween night.

Painia, while said to have strict standards for dress and decorum in his club, was accepting of everyone. In an era of enforced segregation, he welcomed White patrons — including the occasional visiting Hollywood star — into the club.

Serving Black and White music fans in the same room violated a city ordinance against race mixing and earned Painia continual police harassment and even arrests. Eventually, he fought back with a lawsuit challenging the constitutionality of the Jim Crow law. But before it made it to court, the Civil Rights Act of 1964 ended enforced segregation of public accommodations.

In a sad bit of irony, the legal integration Painia fought for contributed to the Dew Drop’s demise — although Jackson has said that his grandfather, who died of cancer in 1972, had also become too ill to continue running the Dew Drop conglomerate.

In a pre-Katrina interview with music historian David Kunian, three Dew Drop alumni all pointed to changes brought about by integration. “I’m not far off the mark,” vocalist and former club owner Irma Thomas told Kunian, “when I say integration killed all of the Black local clubs.”

“There were more opportunities for the musicians as well,” he continued. “So the close-knit thing that the Dew Drop was, as a part of the community, kind of dissipated, just kind of got thinned out.” 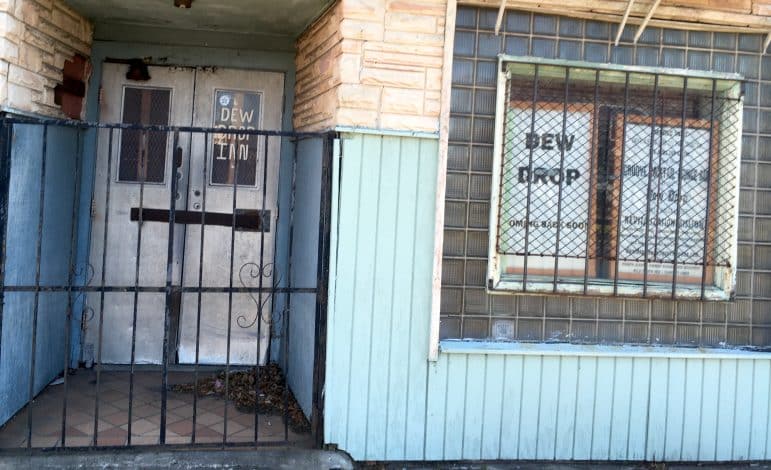 The window at 2836 LaSalle tells of an earlier attempt to revive the Dew Drop. (Uptown Messenger)

Bringing it back to life

The music club closed its doors in 1970, but Painia’s family continued to operate the hotel, and sometimes a sno-ball stand, at the site until 2005. Badly damaged in Hurricane Katrina, the building has not been open to the public since.

That’s not for lack of trying. A sign in the window promises: “Coming back soon.” The revitalization mission it announces appears to be a 2015 effort spearheaded by Jackson.

He partnered with Harmony Neighborhood Development, the Milne Inspiration Center and Tulane School of Architecture to develop a hotel, restaurant and nightclub with a training center for young hospitality workers.

But their campaign to raise $3.5 million fizzled, and Jackson and the other family members put the building on the market in 2018.

Developer Ryan Thomas stepped in with plans for a hotel, nightclub and museum devoted to New Orleans music. The funding, once again, failed to materialize.

“The truth of it is, this is not the most traditionally bankable type of project,” said Doucette, the current developer. “You have to bring in some nontraditional sources.”

A New Orleans native and founding partner of Iris Development, Doucette has specialized in eradicating blight and developing affordable housing. Such projects require creative financing techniques, he pointed out.

“Being a developer and being in the industry I’m in, I have access to the resources,” he said. “I don’t think I’ve ever gotten this far in a project and not completed it.”

One resource he’s turning to is the state tax-credit program for historical preservation. That program will likely require the building’s facade to be restored to its 1950s appearance. Inside he’s planning a hotel, a music venue and bar, and a retail space that could become a coffee shop. An outdoor pool is also in the plans. 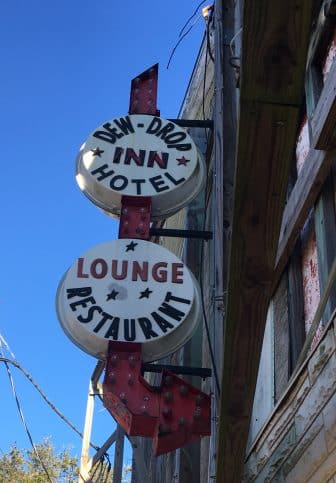 Much of the discussion during Tuesday’s CPC meeting involved approval of the vintage signage. Depending on the state’s requirements, the Dew Drop could display either a replica of the 1950s sign or the same double-circle sign that’s now on the building — and neither conforms to current signage requirements. The staff and commissioners eventually found a way to make sure either could be approved without further red tape.

Fans of the iconic circles-and-arrow can be assured that, even if the sign no longer hangs on the building, it will be in a prominent spot, Doucette said.

“This is a big part of who I am — music in general and the culture that it brings to New Orleans,” he said.

When the Dew Drop is restored, Doucette expects it to draw music fans from all over. Even now, visitors can be seen making a pilgrimage to Central City to photograph and just stand near the dilapidated building.  “It’s interesting,” he said, “to see the awe in people’s eyes.” 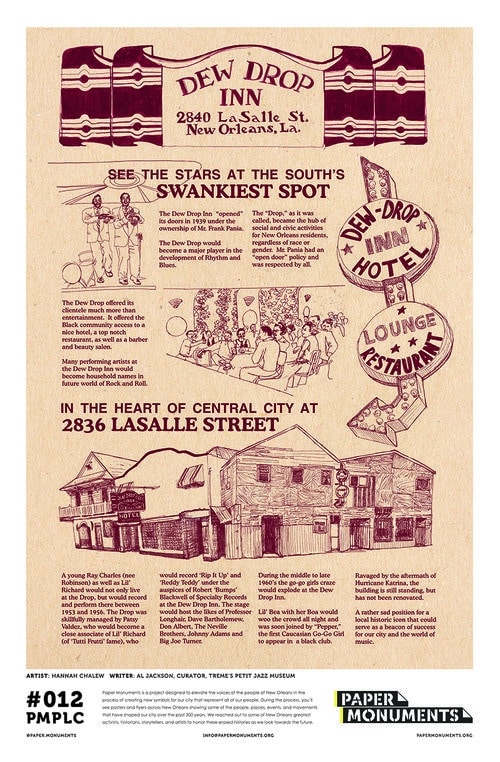 The Dew Drop is featured in the Paper Monuments project.