Both Nola Flora and Peony Fine Clothing on Magazine Street have incorporated large flowers in their storefront floats this Carnival season. 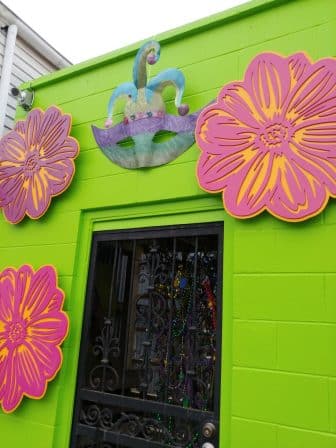 The already festive building at 4536 Magazine St. where Nola Flora is located is eye-catching enough, but it just got enhanced.

Their storefront float theme is the shop’s name and it features giant flowers and a flowering vine going up the front and side of the building.

Nola Flora is located on the Uptown parade route, so when parades were cancelled for this year, it was  truly discouraging. But being good New Orleanians, they took the bad stuff that came their way, covered it in glitter and kept on going.

“As much as we love decorating the shop, we wanted something really dramatic,” said Ashley Watkins-Bateman, the owner. They called in a professional.

“We have partnered with Dave McGuirt of Nola Laserworks for the majority of the decor. He has custom fabricated and painted giant flowers for the front and side of the building. He has been amazing,” she said.

McGuirt did a site visit, consulted with Watkins-Bateman and the staff and talked through the designs and colors.

“I feel I gave him free rein to create some fun elements. I know we always like it when a client says, ‘Just do what you want,’ so, hopefully Dave felt that way about his creations,” Watkins-Bateman said. 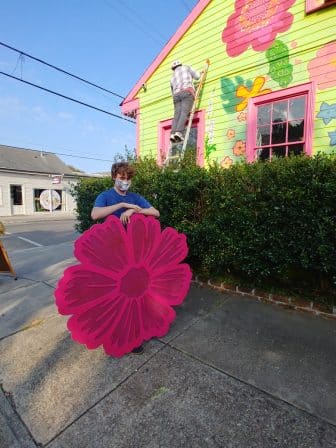 Flowers are added to mural on the side of Nola Flora.

He added a three-dimensional flower design to the already existing “Floral Mural” on the Cadiz Street uptown side of the building. This mural is a work-in-progress by part of the 2021 graduating class of visual arts students from NOCCA.

Nola Flora is participating in the Carnival activities with two krewes as well. It is a point-of-sale for “Hire A Mardi Gras Artist” merchandise for the Krewe of Red Beans, in partnership with the Magazine Street Merchants Association. It is also one of the scanning sites for the Krewe of Muses “Stilotto” raffle to win a coveted glitter shoe.

Nola Flora will have a limited number of hand-cast, one-of-a-kind resin medallions as their 2021 throw.  Made by Lush Magnolia, they contain pressed purple larkspur. They have also built a small second-floor deck from which they will be tossing goodies on Thoth Sunday (Feb. 14) to lucky passers-by. They may even be there on Mardi Gras Day. 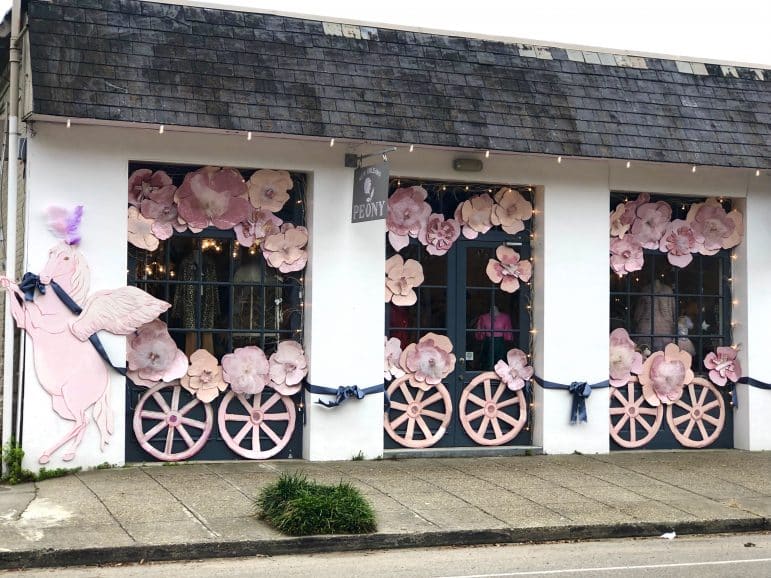 The Peony design is all in pink, which matches the boutique’s interior color scheme. The Peony Pegasus is pulling the rest of the creation on wagon wheels, a nod to the old Carnival parades that still use those today, but sadly not this year.

“I love Mardi Gras,” said owner Jennifer Atkins. “Our neighborhood and customers have helped get us through these pandemic times. We needed a ‘happy project,’ and this was just the thing. We carry clothing for both women and children, so we came up with a design that would appeal to both.”

Kaki Foley of Tattered Designs is a good friend and she and Jennifer, along with staff and other friends, created and installed the entire storefront float. It is made of paper, painted with exterior paint and then sealed with polyurethane. House float seekers can also see Foley’s creations around town and on Julia Strain’s St. Valentine House in the 3800 block of Camp Street.

More than 15 years on Magazine Street, Atkins took the opportunity to move farther downtown when the space that was Clover women’s clothing became available. At that time, she had both Peony for women and Petite Peony for children in two different locations. Then in 2017, the space next door to 2240 Magazine St. became available, so the children’s shop moved there and the two were consolidated in a single location.

Both these businesses are keeping the Carnival spirit alive on Magazine Street and making things brighter for us all despite parade and other event cancellations this year. 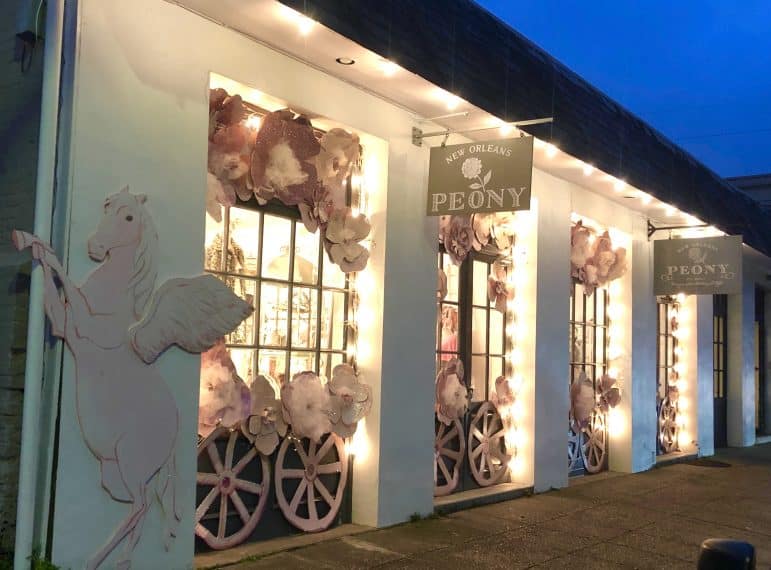