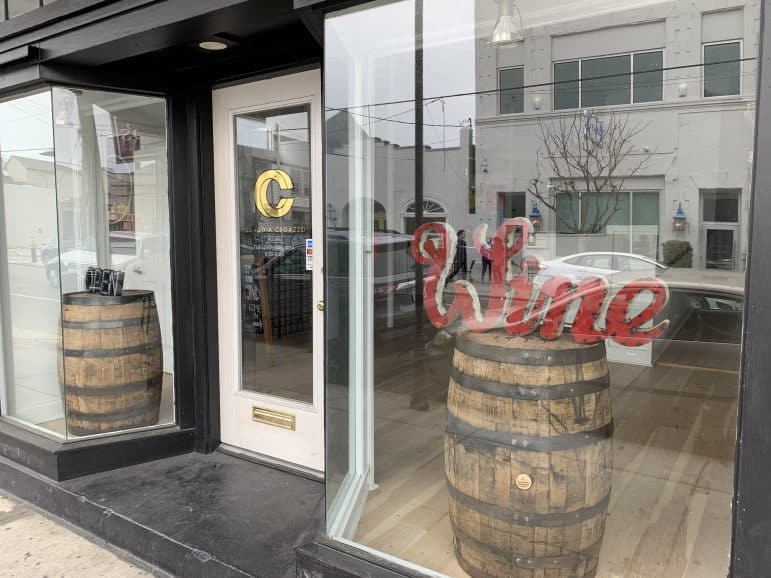 The Magazine Street storefront is in transition, with the window painted for the wine shop and the door still bearing the boutique’s logo.

The stretch of Magazine Street between Gen. Pershing and Milan streets has seen a lot of comings and goings of businesses through the years, and even more recently due to the COVID-19 pandemic.

One new business that plans to open in the next few months is Second Vine Wine, in the space that most recently housed the Claudia Croazzo clothing store, at 4210-14 Magazine St.

If the wine shop’s name is familiar, it’s because Second Vine Wine was previously located in the Marigny Triangle. It closed last year in March, just after the pandemic and lockdowns began.

But you can’t keep a wine lover and educator away from Bacchus’ call, and Troy Gant, one of the previous Second Vine Wine owners, is harvesting a new wine shop.

Gant is bringing the same concept behind the Marigny wine shop to Uptown.

“To offer wines from around the world. All sort of varietals,” said Gant. “With one of our goals to introduce the new wine drinker to a decent price point of good wine.”

Gant also emphasizes that he wants to create a shop that is comfortable, not intimidating.

In addition to the “great wines at introductory prices,” Gant will sell higher-end wines, too.

“I have learned with people that, even if they buy an everyday wine, they also want something for that special moment,” he said. 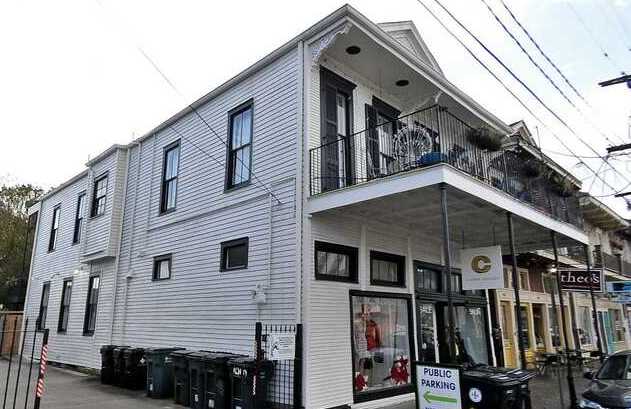 On Jan. 26, the City Planning Commission considered the new wine shop: “Request by Chartres Properties LLC for a conditional use to permit a wine shop in an HU-B1 Historic Urban Neighborhood Business District.”

Chartres Properties LLC has owned the Magazine Street building since 2012, Assessor’s Office records show.  The sole officer for Chartres is Robert Watters, the president of Rick’s Cabaret and RCI Entertainment in Louisiana.

The wine shop’s location was brought up among the commission’s members and CPC Executive Director Robert Rivers. The issue was about its proximity to St. Henry’s Catholic Church and Ecole Bilingue de la Nouvelle-Orléans, in particular, whether it fell inside or outside of the boundaries based on a city ordinance stating: “No permit shall be granted for opening of retail sales of packaged alcoholic beverages within 300 foot radius of any lot line of a playground, church, public library or school.” 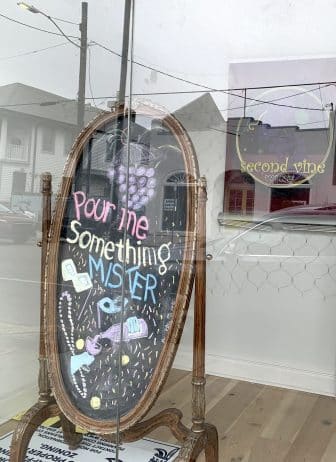 The window is dressed for Mardi Gras.

Zella May, representing Chartres Properties at the hearing, said she had Alcohol & Tobacco Control do measurements and they found that the wine shop measured beyond the 300-foot requirement of the two properties.

When the plans for the wine shop were announced in the fall, the Ecole Bilingue sent May an email stating the school’s Board of Trustees voted that it would not oppose the shop, city records show.

The CPC staff announced their recommendation to approve the application, and the CPC voted to approve it.

The final step is the City Council. The first time it can appear on the agenda is at the Feb. 25 meeting.

While no neighborhood associations in the surrounding area answered emails about what they thought about the new wine shop, it does fit in with the other retail outlets on the block. The Faubourg Marengo Neighbor Association had earlier expressed its support for the shop, and no one spoke in opposition to the shop at the Planning Commission hearing.

Gant, a native New Orleanian, got his experience in the wine industry as a Rémy Cointreau representative.

The Second Vine Wine name has two inspirations: His mother-in-law, now deceased, who was the dean of music and Indiana University of Pennsylvania. “She knew all these songs and she mentioned New Orleans second-line,” Gant said.

The second came from his work as a Remy Cointreau representative.

“During my 10 years with Remy, I saw the distillation process, how the process went from ground to the vats,” Gant said. “From that, there is the first press of grapes, and then the second press is called the second wine.”

Gant also hopes to have wine tastings and create what he is calling the Tastemakers Club. This is a group of wine lovers who, along with him, would meet with wine suppliers and distributors who are trying to sell Gant wine for the shop. These “tastemakers,” will be, Gant’s first line of defense,” he said. “They can say yes or no, and this will help with sales and development with a brand.”