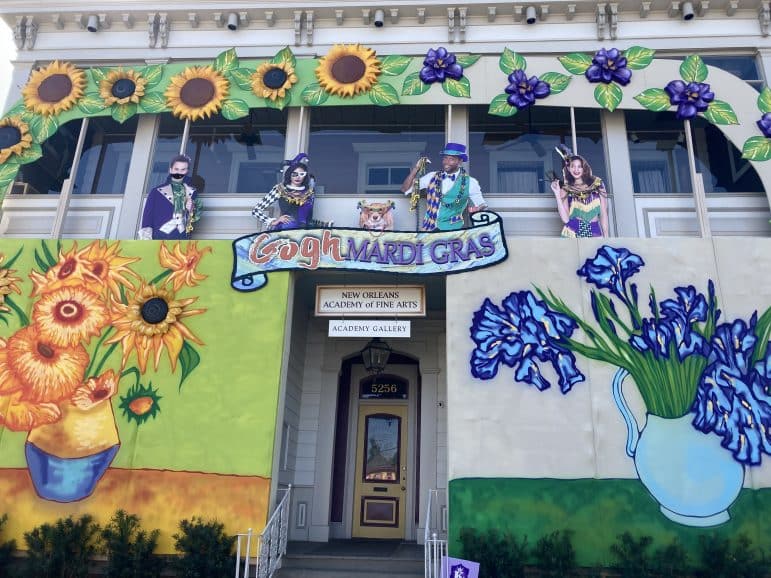 In more than 40 years of being in the same building at 5256 Magazine St., never did the nonprofit New Orleans Academy of Fine Arts imagine that they would be turned into a house float.

The school located on the route of many Uptown parades usually has a viewing stand. This year, school officials had planned to turn it into a fundraising event for the institution and charge admission.

But the pandemic and canceled parades changed all that. “We wanted to have our installation look like a real float,” said school President Dian Winingder about the creation entitled “Gogh Mardi Gras.” 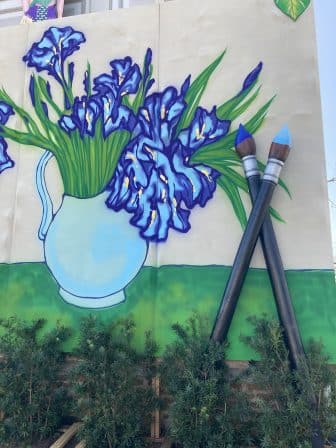 It is of course an homage to Vincent Van Gogh (they call the tractor driver “Vincent”) and, Winingder said, his imagery is easy to recognize and simple enough to make into float props and decorations.

The sunflowers are iconic Van Gogh images. The irises, which Van Gogh also favored, are a nod to Winingder’s membership in the Krewe of Iris. In fact, she reigned as their Queen in 1990.

And why did an art school hire professional artists at Kern Studios to create their float? For one thing, school was not in session – the students were on semester break.

Another factor was how big the façade of the building is and how complex the installation turned out to be. The building is a historic structure that was given to the school by a patron. And it was clear that TLC was in order.

“The installation,” continued Winingder, “was almost as beautiful as the float ended up being.” The crew was ultra professional and really knew what they were doing, she said. 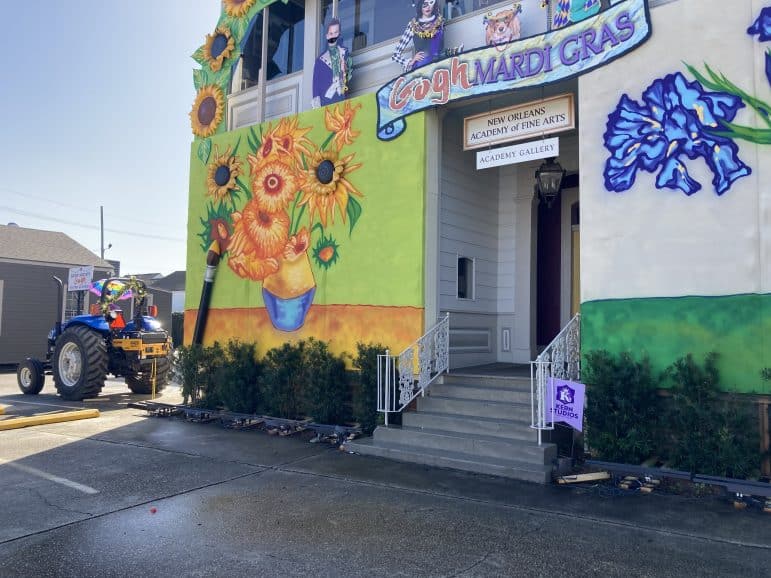 The New Orleans Academy of Fine Arts even has a tractor, an essential element of Carnival parades.

“I insisted on the tractor,” she added. “I knew that would make it look even more like a real float.” And there are a lot of tractors sitting idle this Carnival season in New Orleans.

The New Orleans Academy of Fine Arts currently has 265 students, all taking classes in person, in socially distanced settings. The curriculum of noncredit courses features classical instruction of traditional methods.

School officials, including recently hired director Andrew Rodgers, are pivoting to a more community-based focus. And inclusivity is a major goal.

With that, their classes are also branching out to include subjects like photography and video and more contemporary expressions. In addition to its teaching facilities, it has an exhibition gallery that regularly showcases the work of both students and faculty. 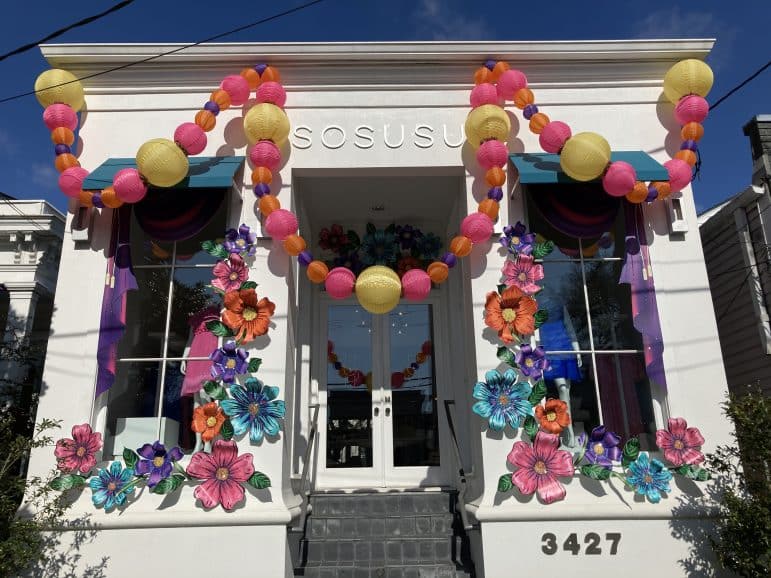 Sosusu Boutique, farther downtown on Magazine Street, is festooned with a large string of beads and gorgeous flowers in the doorway and on the façade.  “I decided to decorate my storefront in order to spread joy into the community even though Mardi Gras has been canceled,” owner Susu Stall said.

She has a long-standing relationship with Urban Earth Studios, so she hired them to fabricate the creation, and to do what turned out to be a complicated installation. “I have worked with Roland [Montealegre] for years and knew he would do it just right,” she continued.

They met to discuss the design. It had to be Mardi Gras festive, but also to reflect Sosusu Boutique. Stall loves florals and color and wanted something beautiful and tasteful. They decided to go beyond the traditional Carnival colors of green, gold and purple. The color of the existing awnings is also picked up in some of the flowers.

The string of beads is cleverly made from nylon lanterns, so they light up at night. The nylon fabric makes them shine in the daytime, and of course they are weatherproof. Like the New Orleans Academy of Fine Arts installation, this one also required TLC.

Because the building is stuccoed, the installation was another project. The installers from Urban Earth built a structure to nail the storefront float elements onto so they did not damage the façade.

“To have these [storefront and house floats] because we are not having parades, and to see people who have been in lockdown enjoy them is wonderful,” Roland Montealegre said. “I really hope it continues. It brings revenue to local businesses. We’ve been busy with all these ‘floats.’”

According to the shop’s website, in late 2016, Stall realized her dream of opening her own boutique, bringing unique contemporary fashion from across the globe to her hometown. The center hall cottage on Magazine Street offers both well-known and emerging labels. And for some brands, Sosusu is the sole U.S. representative.

“Hopefully this will raise awareness to Magazine Street and all that we have to offer,” exclaims Stall. Like Montealegre, she hopes the house float phenomenon continues in the years to come, not just for this off year. “The community seems to be enjoying all the decor and it’s putting a little bounce in our step,” she said.

A bounce in our step indeed. The beautiful and creative decorations along Magazine Street are telling the world that businesses are helping us all to celebrate a Carnival like no other. 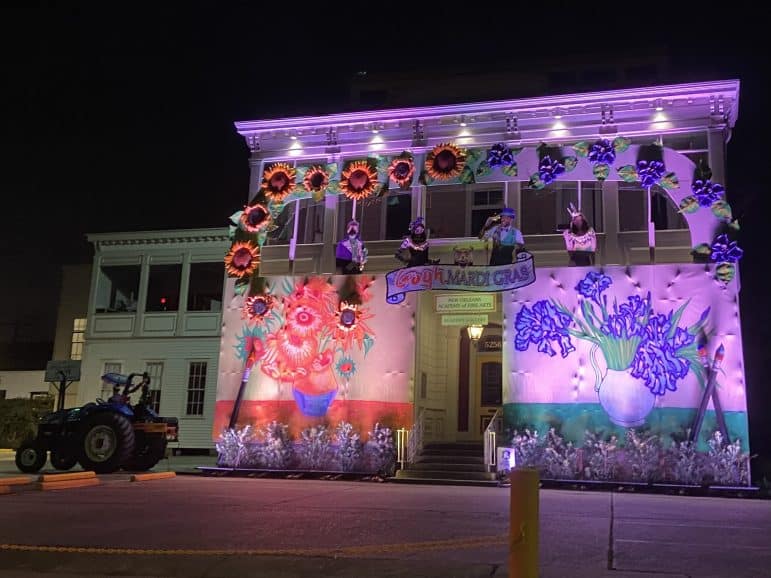 The “Gogh Mardi Gras” float stands out at night.