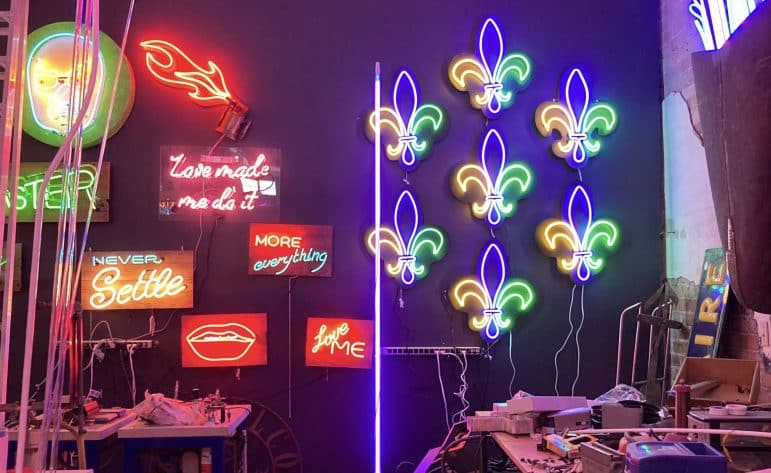 The space at 1618 Oretha Castle Haley surely never looked like this before. The Big Sexy Neon studio is filled floor-to-ceiling with fantastic new neon works and vintage signs waiting to be restored. There are fleurs-de-lis, there are corkscrews, there are quirky signs, there are gorgeous works of art — all on dazzling display.

Nearly a year ago to the day, Nate Sheaffer signed a lease on the space that formerly housed the Zeitgeist Multi-Disciplinary Art Center, which is now on St. Claude Avenue in Arabi. 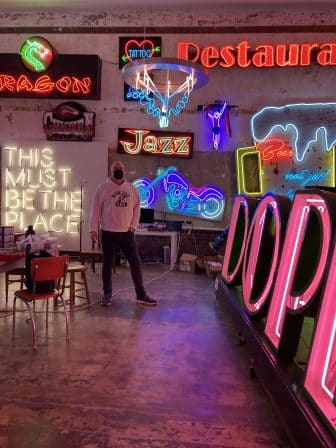 Nate Sheaffer in his neon studio.

Sheaffer moved to New Orleans from Raleigh, North Carolina, last spring. Why would someone move in a pandemic? The answer, of course, is love.

In May 2019, Sheaffer had an exhibition of his glass artworks at the Martine Chaisson Gallery on Camp Street, and during the course of the show he met a woman in the local art community. It is because of this special woman he packed up and re-located to New Orleans.

So how does someone become a neon artist? “I’ve always loved neon, even when I was a kid,” Sheaffer said. And in college he took a glass blowing class and was hooked.

“A few months after graduation I opened a neon studio, thinking that I could make a living selling art pieces,” he said. “I quickly learned that to have a career that paid the bills, I had to also do commercial work. A lot of commercial work.”

This grew into a 22-person operation, called Neon Impressions, located in Raleigh. “We were making thousands of pieces per year — locally, nationally and internationally,” he said.

Then in 1999, the bottom fell out for Sheaffer and neon shops like his. The emerging Chinese market was able to produce and sell neon cheaper than could be made in studios like his. 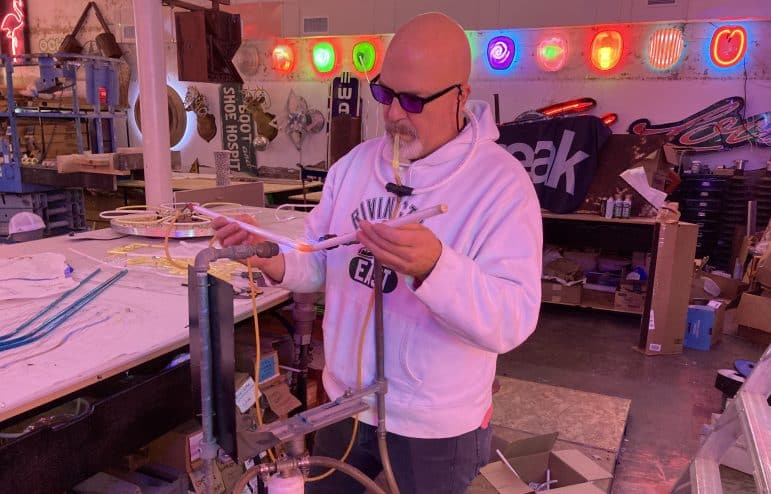 He closed down and became a stay-at-home dad for years. By the time his two children were in school, he wanted to get back into his craft. With the encouragement and help of a friend, he opened a small studio, called Glas, making both artwork and commercial pieces.

He re-established connections, eased back into the business and eventually had a full-time staff of four. Shaffer now returns a couple of times a month to keep hands on and to see his children. “Glas was supposed to be the financial engine that made my operation in New Orleans feasible,” Sheaffer said.

Then the pandemic hit. Much of his business revolves around the very industries that have been hardest hit: bars, music venues, restaurants, in-person classes and special events.

Like the space in New Orleans, Sheaffer’s studio in Raleigh is a great event space. “We used to have at least two or three special events per month, now zero,” he said. But it is slowly coming back.

Sheaffer sees a bright future, however, for his New Orleans operation and for the section of Oretha Castle Haley where it’s located. The Balcony Bar is putting in a second location, and La Vie En Rose Café, now at the Contemporary Art Center, is moving into the front of the Big Sexy Neon studio. “This will be a coffee shop like none other in New Orleans,” he emphasized. 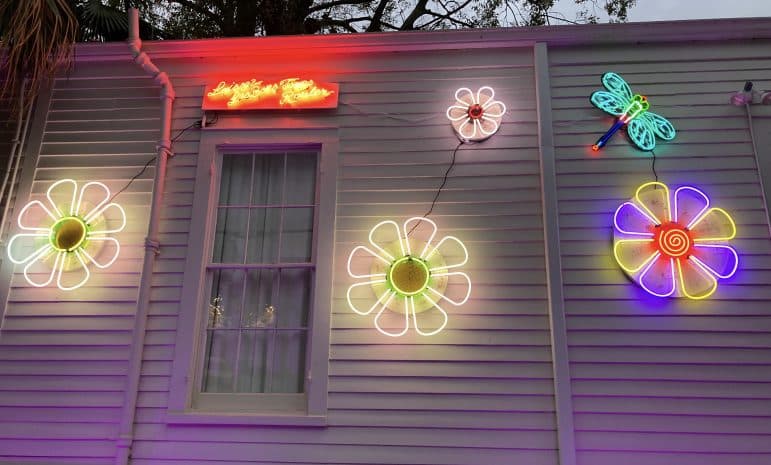 “I also see the market of renting signs for events being big in New Orleans. Also, special events taking place in this space on OCH,” he said. “I did a number of house floats, thanks mostly to the Krewe of House Floats’ resource page, and so my name is getting out there. We will also being doing demonstrations for school students and conducting socially distant classes.”