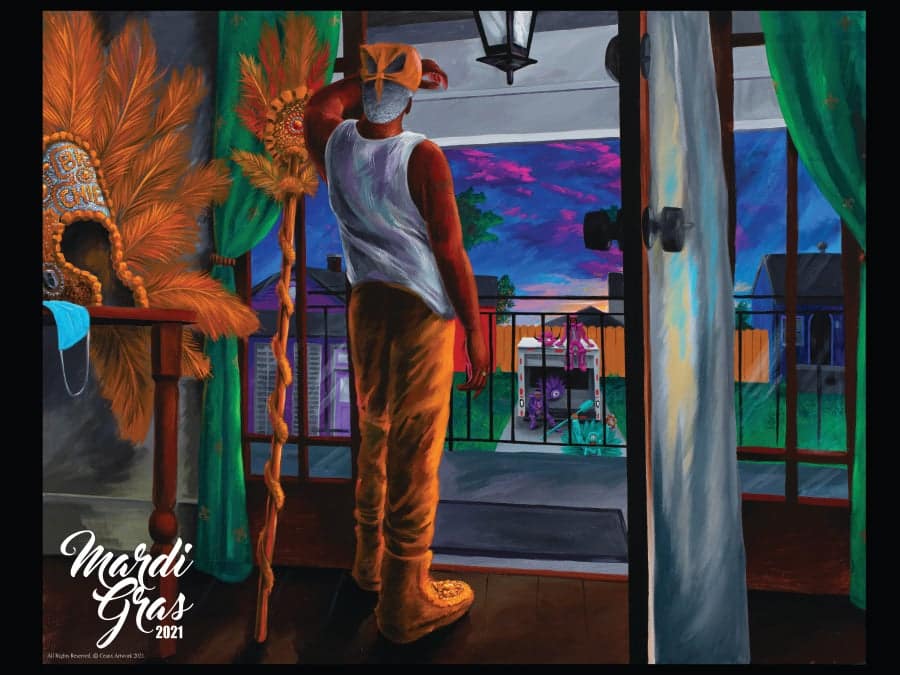 Every year since 2016, New Orleans-born-and-raised multimedia artist Courtney “Ceaux” Buckley, of Axiom Gallery on Freret Street, has been painting vibrant and detailed posters that depict the Black Mardi Gras experience.

Through this annual poster series, Buckley said, he not only aims to provide a representation of the Black experience during Carnival season, but that he also intends to normalize it.

“I don’t think we should always be presented like a big deal,” he said. “These things go on all the time, every year, it’s recurring.”

He adds that it is important for Black people from New Orleans to see representations of their culture in this more generalized way opposed to only packaged news stories and documentaries. 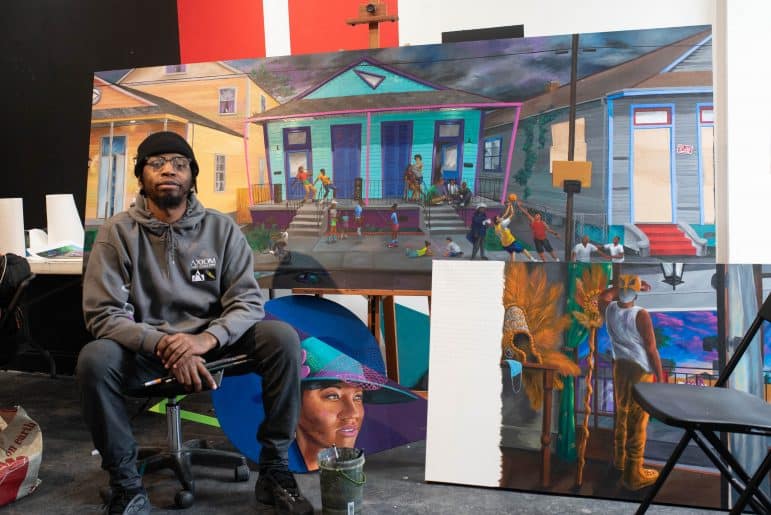 Ceaux Buckley sits in front of his art for a portrait at the Axiom Gallery.

Buckley said that the poster series was inspired by childhood photos lost in the levee failures after Hurricane Katrina. Through these posters, he said, he is able to record a sense of his personal experiences while they are still vivid in his memory.

Through his series’ nostalgic imagery, he also brings together the community of Black people raised in New Orleans by showing and reminding that many of them have shared memories and experiences growing up in the city.

“A lot of us have the exact same stories,” he said. “We just never know until we speak on it.”

Cierra Chenier, writer, historian and founder of Noir ‘N Nola, said his posters portray how the heart of the Black Mardi Gras experience lies in tradition and community.

“For Black New Orleans, Mardi Gras is less about the hype or the commercial aspects. It’s whose people cooked and are posted near the parade route,” Chenier said. “It’s being around family and your people you might not have seen all year.

“It’s Skull and Bone Gang waking up the Tremé at crack of dawn. It’s clearing the way for the Marching 100. It’s when Zulu hits Orleans,” she continued. “It’s the Mardi Gras Indian tribes looking ‘pretty, pretty’ and showing off their suits. It’s crawfish and daiquiris. It’s porch steps. It’s under the bridge. It’s the neighborhoods and community. It’s tradition.” 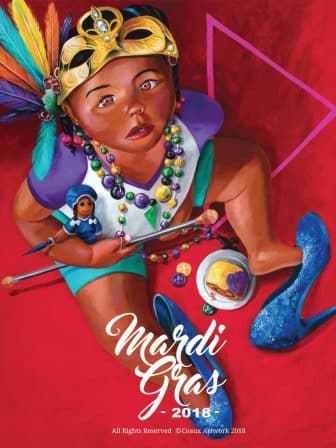 The first three posters in the series (2016-18) feature the same baby that represents his childhood and growing up in New Orleans.

He also implements imagery that represent Black history, culture, and traditions such as Mardi Gras Indians, second-lines, Zulu parades, the Skull and Bone Gang, and more. Opposed to other forms of media that may present these themes in more theatrical ways, Buckley incorporates imagery of these themes in ways that offer a sense of normalcy.

Buckley explained that the posters’ look changed in 2019 when he started to paint landscapes in effort to include other generations integral to the Black New Orleans Mardi Gras experience and to “let the scene tell the story.”

For example, he said the 2019 poster is inspired by memories of trading catches with his cousins after watching the Zulu parade roll down Orleans Avenue, where his aunt would bring them to watch every year. 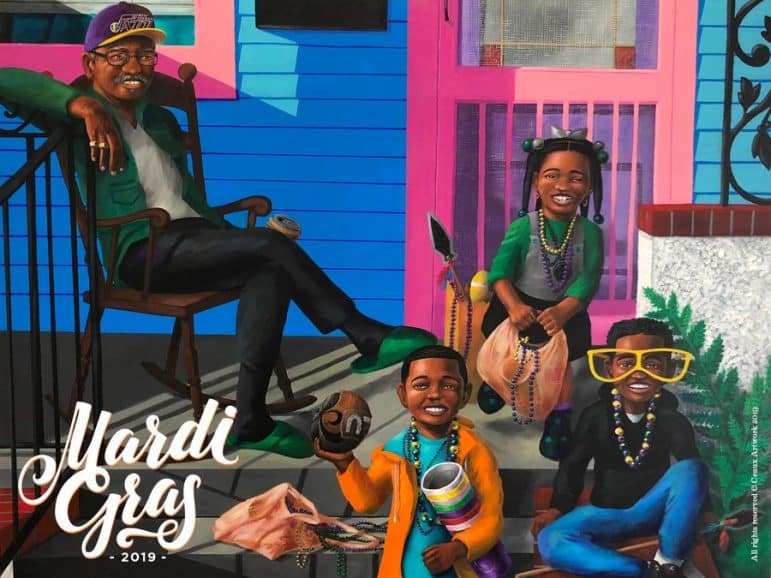 Buckley said that initially, he was unsure that he would do a Mardi Gras poster for 2021 because of the COVID-19 pandemic and the uncertainty of what this Mardi Gras season would look like.

Although he didn’t know of the response he’d receive or level of interest, he said that he found it important to still document this year. He added that the 2021 poster has actually generated the most interest of the six.

“Just thinking about time in general, say, three years from now, reflecting back when Mardi Gras is normal, this will be a time that we will never forget,” he said.

This year’s poster inevitably holds a more serious and solemn tone, featuring a bright-blue face mask and Mardi Gras Indians dressed and with suits out, but at their respective homes and socially distanced apart from each other. 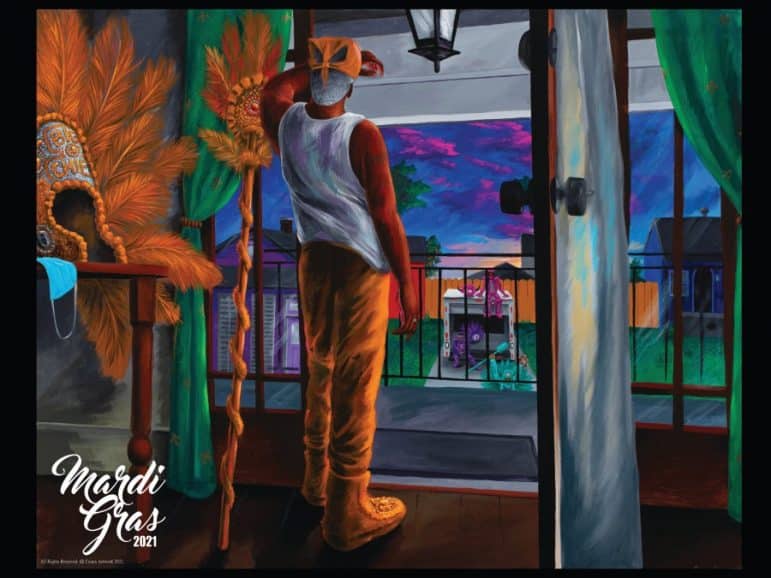 Chenier described Carnival in New Orleans as having always been a tale of two cities.

“While all-white krewes rolled down St. Charles with Jim Crow on full display, the real Mardi Gras was happening in the ‘backstreets,’ the Black neighborhoods,” she said.

Buckley acknowledges that there are still different sides and celebrations of Mardi Gras in New Orleans, and that those on one side can be pretty oblivious to the other. He gave the example of knowing that Rex rolls every year, but being far-removed from ball dates, names of royalty, etc.

“The people who want to know, do know, will know. It isn’t something that you can erase,” he said about Black Mardi Gras culture. “It just may not be broadcasted to another audience, but it still exists in the same way.”

Chenier adds the role the influence of Black New Orleans’ culture plays in what Mardi Gras is today can’t be ignored.

“There’s so much importance in the traditions that we’ve created despite being historically excluded that we still hold on to today,” she said. “And ironically, it’s what people now come all over the world to experience or get a glimpse of.”

Reporter Camille Barnett can be reached at camibar1995@gmail.com.