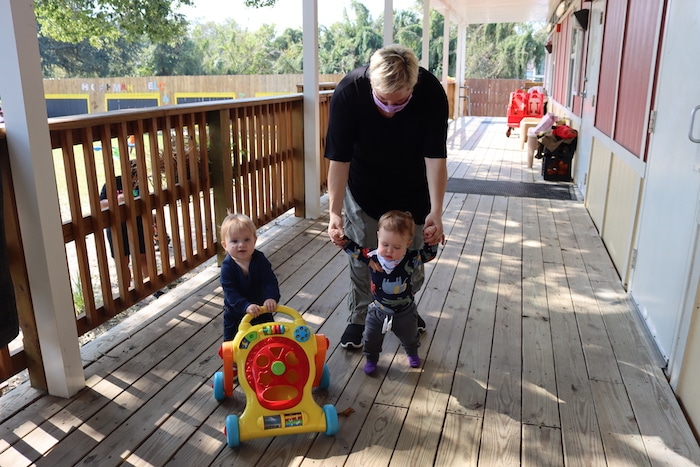 The Kellogg Foundation awarded Hoffman Early Learning Center (Hoffman) a two-year grant for $400,000. “These funds will help the center achieve sustainability and to achieve its mission to provide a high-quality, affordable early education to children from a diverse set of socio-economic background,” said Joel Castro, CEO of New Orleans College Prep which operates Hoffman.

“We know there is a need for our services, and the support from the Kellogg Foundation will greatly help us further our mission,” said Castro, citing research showing that there are nearly 12,000 low-income families with children ages 0-4 without access to affordable, quality early childcare programs in New Orleans. “Our job is to close the learning gap between low-income students and their more affluent peers,” he said.

“We are doing that,” said Hoffman Executive Director Zerlander Ragas. “I could not be more proud of my teacher’s efforts. Last year, we made the Louisiana Honor Roll for Early Learning Centers because the exemplary education we provide our students.”

The center operates on a model that embraces diversity. 55% of seats are publicly funded and reserved for low-income students. The remaining seats are for students whose families pay tuition on a sliding scale. In addition, Hoffman families are equally diverse—59% percent identify as African American, 25% white, 12% mixed race, and 4% Latino.

Prior to the pandemic, Hoffman maintained a waitlist with over 100 families on it. Additionally, 91% of parents surveyed said they would recommend Hoffman to other families, and 96% indicated that the diversity at Hoffman was a benefit for their children and family. Since the pandemic, however, the center has experienced declined enrollment. Zerlander Ragas explained after reopening in the summer, some families opted not to return to Hoffman.

“Most returned by September,” she added, “however, during the months we closed, we lost a significant amount of revenue.”

“We have taken a financial hit during the pandemic,” added Joel Castro, CEO. “That is why this support from the Kellogg foundation is so vital. It has enabled us to stay afloat during a time when many centers have not fared as well or even had to close altogether. We could not be more grateful for our continued partnership with the Kellogg Foundation.”

About Hoffman
Hoffman Early Learning Center is operated by New Orleans College Prep, which oversee one elementary school and one high school in addition to Hoffman. Founded in 2007, the organization’s mission is to prepare students for success in college and beyond by providing a rigorous and equitable education.

About The Kellogg Foundation
The W.K. Kellogg Foundation (WKKF)—founded in 1930 as an independent, private foundation by breakfast cereal innovator and entrepreneur Will Keith Kellogg—is among the largest philanthropic foundations in the United States. Guided by the belief that all children should have an equal opportunity to thrive, WKKF works with communities to create conditions for vulnerable children so they can realize their full potential in school, work and life.

The Kellogg Foundation is based in Battle Creek, MI, and works throughout the United States and internationally, as well as with sovereign tribes. Special attention is paid to priority places where there are high concentrations of poverty and where children face significant barriers to success. WKKF priority places in the U.S. are in Michigan, Mississippi, New Mexico and New Orleans; and internationally, are in Mexico and Haiti. For more information, visit www.wkkf.org.