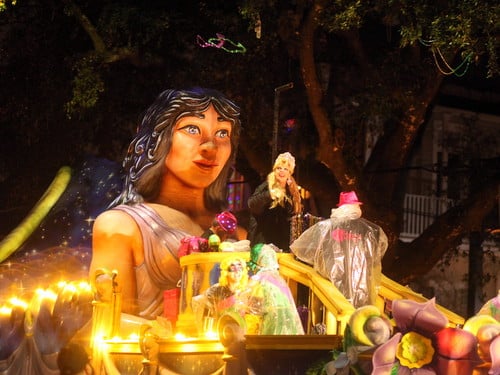 On what would have been Nyx Wednesday, five former members of the Mystic Krewe of Nyx instead petitioned for a class action against the krewe, its captain Julie Lea, her husband Chris Lea and related organizations.

The lawsuit seeks a class action certification for all former and current Nyx members since 2016 who suffered economic damages in connection with the krewe, whose signature throw is glittery purse. The krewe has boasted of having more than 3,000 members.

The complaint describes Lea’s financial dealings on behalf of the all-female superkrewe, alleging, for example, that she forced members to pay for tips and other expenses in cash and apparently pocketed the money.

It details credit card charges uncovered by Fox 8’s Lee Zurik and states the krewe paid for a New Orleans pied-à-terre for the Leas, who live on the north shore.

The complaint states that “Julie Lea caused Nyx to adopt bylaws that gave her significant and nearly unchecked power.” Attempts to reach Lea for comment were unsuccessful.

Many Nyx members exited the krewe in summer 2020 over Lea’s controversial social media posts as the Black Lives Matter movement was surging nationwide. At that time, some members cited other complaints about Lea’s leadership.

The plaintiffs include Cantrece Reed, Nonette Pierre, Holly McKenny, Tiffani Bush and Jennie Campbell. Lea had organized a fundraiser on behalf of Reed to help her rebuild her life after a house fire, but never gave the money to Reed, the suit alleges.

The complaint seeks financial damages for alleged gross mismanagement by Lea. It reads in part:

“This Class Action is the apex of one of the most notable falls from grace in the long and storied history of Mardi Gras. As recently as 2019, the Mystic Krewe of Nyx boasted nearly 3,000 members and was New Orleans’ largest all-female krewe. As the Krewe of Nyx grew, Julie Lea, the Krewe’s Captain, rode high and lived a lavish life – all on the backs of her Nyx “sisters.”

After she revealed herself as oblivious and insensitive to the ethnically diverse Krewe she purported to command, it turned out that Julie Lea had become, effectively, the Krewe’s income beneficiary. In this case, the Plaintiffs will show that Lea controlled the Krewe of Nyx for her personal benefit. Lea converted charitable funds donated to a Nyx sister whose house burned to the ground, she required Krewe members to pay her husband’s company, and tips intended for drivers disappeared—ostensibly into Lea’s pocket. She insisted so many transactions be in cash money. The Plaintiffs believe she engaged in racketeering, breach of contract, and unfair trade practices, which can only be compensated in the same: damages.”

Anyone who would like more information, including a full copy of the complaint and information on joining the class action, can visit www.snw.law or e-mail nyx@snw.law.