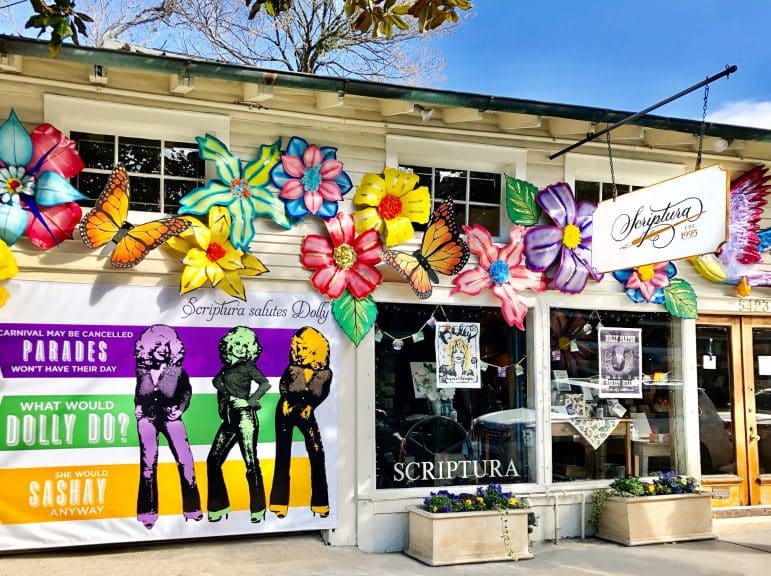 Scriptura and Parcels & Post have both installed storefront floats to bring the Carnival spirit to Magazine Street. And together they represent some popular images in the house float craze: oversized flowers, king cakes, alligators and Dolly Parton.

Scriptura has a 25-year history at 5423 Magazine St. It started in just the front room, and gradually grew into the owners buying the building and taking over every square inch. They have their letterpress studio in the back, retail in the front and offices on the second floor.

Scriptura’s storefront “house float” is dedicated to the country music star because of the inspiration she provided during the difficulties of last year.

The year 2020 was full of personal loss for the owners of Scriptura. During the winter holiday season, they found solace watching Dolly Parton’s Christmas special. Co-owners Margaret Jones, her sister Sallie Mykris and her husband David Isganitis felt uplifted by her message of hope. 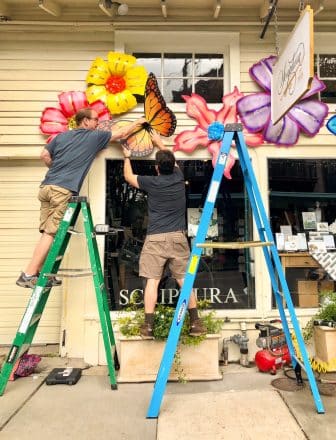 When they decided to create a house float for their Magazine Street storefront, they chose a Dolly theme. Their clever installation is a combination of DIY and professionally made pieces.

“We rented flowers and butterflies from Kern Studios and installed them ourselves. We designed a banner with Dolly Parton likeness and wrote a poem in her honor,” Margaret Jones said. “Scriptura is celebrating Dolly Gras.”

The installation required one staple gun, two husbands, two power drills and three ladders. “Our installation spanned almost nine days; we did a little at a time,” Jones said.

The final piece was putting up the giant banner. And then Dolly Parton herself got into the action.

Parton’s team heard about the storefront float and sent a huge box of fan swag:  bandanas, posters, keychains and even back-stage passes. They were shared with the Parton fans who came to the store.

“We simply ask they write her a letter before they help themselves to swag,” Jones said. “An amazing array of individuals has come to pay their respects and leave a letter for Dolly. At least 50% are in costume, some as Dolly.”

Scriptura has become a pilgrimage site for Parton fans state-wide, Jones said. To date their oldest visitor has been 92 and their youngest, 7. They have a huge collection of letters to send to Parton after Mardi Gras. 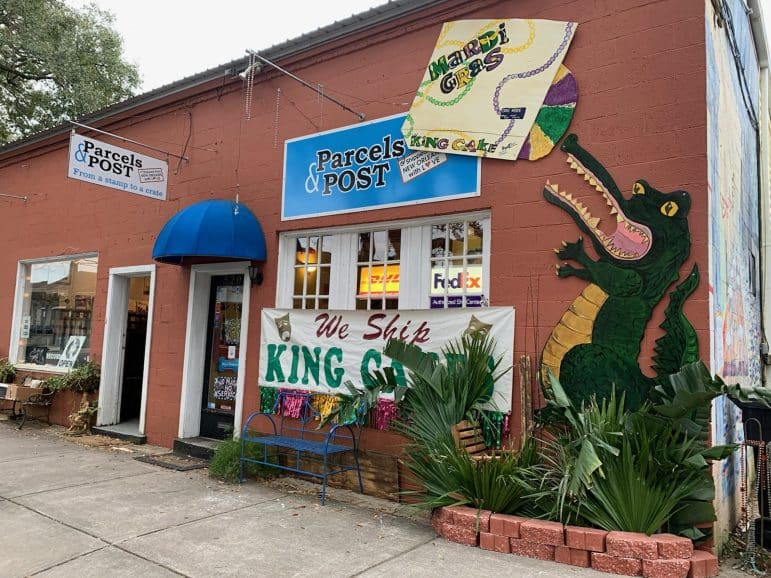 A few blocks away at Parcels & Post, Heidi Hammond wanted to celebrate the 10th anniversary of her Magazine Street shipping service in some special way. She settled on two things: offering her customers 20% off shipping king cakes this year and decorating the front of the building to celebrate Carnival. And of course, it had to have a king cake theme.

“One of the big benefits of having a commercial space on Magazine above Napoleon are parades passing right in front of the store. We are going to miss closing early and grabbing a beer to sit out front and people-watch until the big event,” Hammond said. “Also, we will not get the opportunity to gather friends, family and customers at our shop all in one place.”

So they had to find another way to celebrate Carnival and share that celebration with others, while social distancing. “My husband John and I wanted to give a little back to our community,” Hammond said, “and we hope that the little ones get a smile from our bead and king-cake hungry alligator.”

As she was planning her storefront float, a local artist who stocks Parcels & Post with hand-made cards reminded her that Lesley Nash, the owner of Fly Right Galaxy on Lyons Street, would be a good resource for a custom piece.

“We felt really good about supporting a friend and neighboring business and getting absolutely exactly what we wanted,” she said. “The 3D swamp-camp with a rocking chair and fishing poles was put together by our family.”

“I am loving all the creativity and joy that store owners are expressing so boisterously this season,” Hammond said. “It just goes to show that we may not have parades, but nothing is going to keep New Orleanians from celebrating Mardi Gras.”