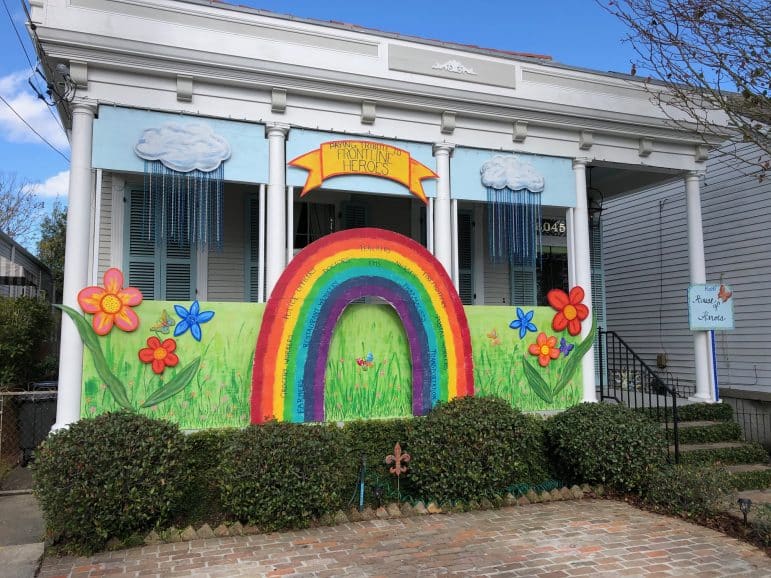 The iconic song “The House of the Rising Sun” comes to mind when you learn the theme of the Audubon Riverside subkrewe of the Krewe of House Floats. “There Is a House in New Orleans” is the theme, and many houses are already wowing passers-by (and drivers-by).

Audubon Riverside has 170 official houses that will appear on the map that will roll out on the KoHF website on Feb. 1.

The subkrewe’s captain, Courtney Guidry, saw some chatter about “house floats” around Thanksgiving and posted a question on whether her neighborhood was going to be included. With that, Admiral Megan Boudreaux asked if she wanted to serve as the area captain.

Like the other KoHF subkrewes, Audubon Riverside is supporting a charity. They chose “Meals for Musicians,” a New Orleans Musicians’ Clinic program. They provide meals and groceries for musicians, culture bearers and hospitality workers. The subkrewe is also partnering with Zatarain’s the day before Mardi Gras to host a drive-thru food distribution, offering boxed meals as well as groceries.

Asked if the decorators have had supply shortages, Guidry immediately said: “Green, gold and purple paint is sold out everywhere. Also I hear flood lights of those colors are long gone as well.” Another scarce item is foam and foam core board.

“We do not have a craft pantry like some subkrewes, but we rely on emails and Facebook posts of neighbors helping each other source materials,” she said. “For example, someone needed two of those balls that are used in ball pits where children play. Another person had ordered a big quantity and had two left over. Problem solved.”

Another challenge that people have traded tips about is how to hang the elements so they do not damage the historic homes in the area. Residents are also grappling with where and how to store the decorations to re-use next year.

The thinking around town seems to be that with all the work and effort that goes into these installations, why not use them annually? No doubt they will get creative modifications over time.

When asked about whether house are floats already up, she cited one in the 6000 block of Patton Street with a tribute to essential workers. 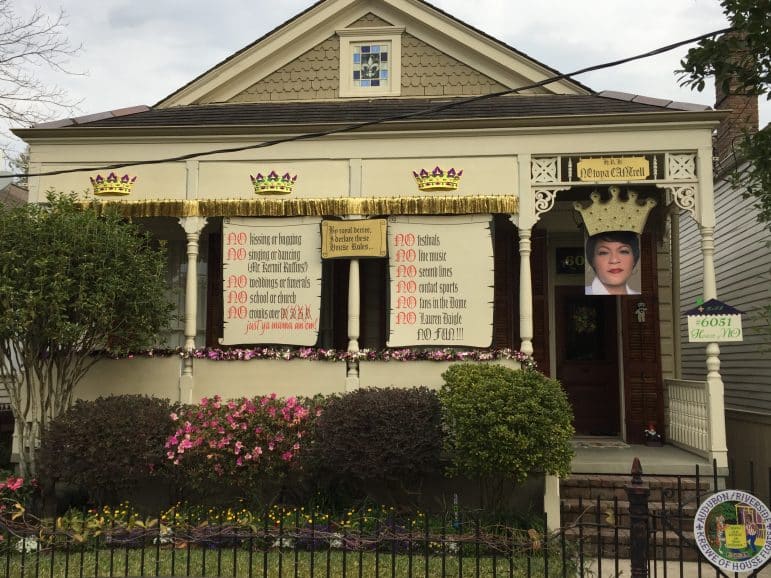 The “House of NO” caught the attention of its subject, Mayor LaToya Cantrell. Read the House Rules below.

And word of a satirical house float called “The House of NO,” satirizing all the things N.O. Mayor LaToya Cantrell has said “no” to during the pandemic, has reached City Hall.

This installation prompted a message from Cantrell to Captain Guidry. The mayor called it was “very creative” and said she might even post it on social media. 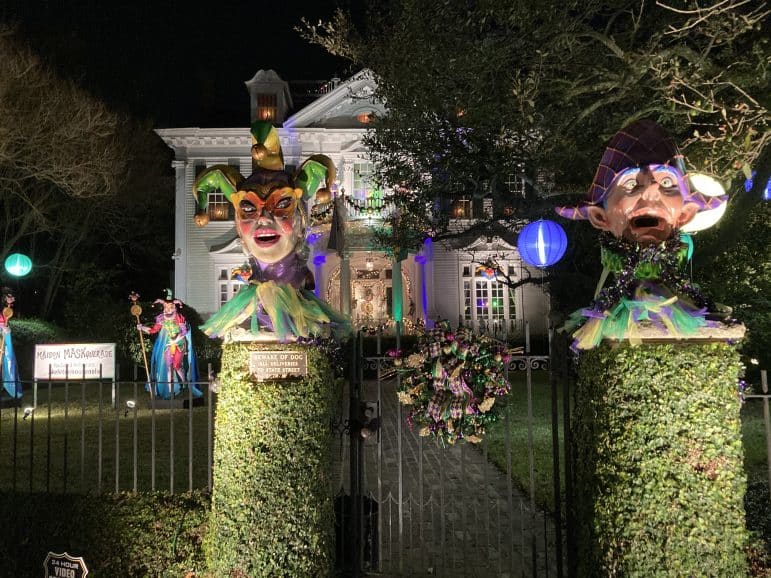 And the house on the corner of St. Charles Avenue and State Street, known affectionately as the “skeleton house” for its elaborate Halloween installations, has installed a “Maison MASKquerade,” complete with its own YouTube video.

Dolly Parton is a popular subject for house floats. There are at least three, two in Uptown New Orleans, one in Algiers, and undoubtedly more. 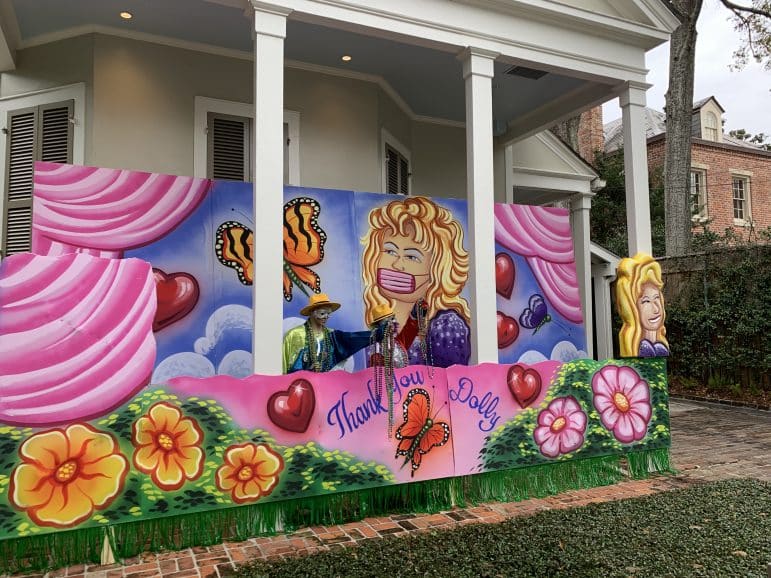 The “Thank you, Dolly” house in the 400 block of Audubon Street.

Joey Walker and his husband, John Malta, in the 400 block of Audubon Street have long been big fans of Dolly Parton. They knew they wanted to dedicate something to her and her generous donations to various causes, including $1 million to the Moderna vaccine trials. Walker calls the house floats “this great idea to keep us all going during this strange Carnival.”

“We hired float builders because we wanted to support them after parades were canceled, and then we embellished the installation,” he said. “We are donating it to a school’s theater department after it comes down.”

Clearly Guidry has a lot of work with 170 official houses, and that’s not counting all the neighbors who chose to be off the map.

“It has been a really fun and different way to meet neighbors,” Guidry said. “I would have never met them, especially during COVID-19. I have seen joy that I haven’t seen for months. We [New Orleanians] are about resurgence and perseverance.” 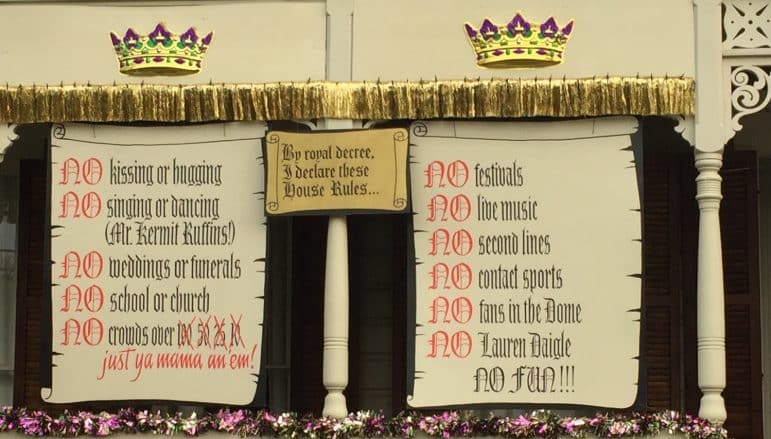 The House Rules, by royal decree, on the “House of NO.”