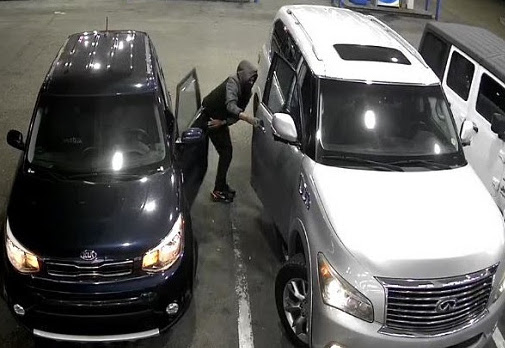 A 2012 silver Infiniti QX56, left, is stolen in a convenience store parking lot on Jan. 4.

The New Orleans Police Department is investigating two vehicle thefts incidents at a gas station in the 3400 block of South Carrollton Avenue.

On Jan. 4 at about 12:55 a.m., the victim left his 2012 silver Infiniti QX56 running while he entered the Magnolia Discount convenience store. A 2019 blue Kia Soul bearing Louisiana license plate N543133 pulled up beside the Infinity, at which time the driver exited the Kia, entered the Infinity and drove away with the Kia following.

The Kia was reported stolen during a simple robbery in the 4500 block of Walmsley Avenue earlier this month. The Infiniti was later recovered in the 1000 block of North Gayoso Street, in the Bayou St. John neighborhood. 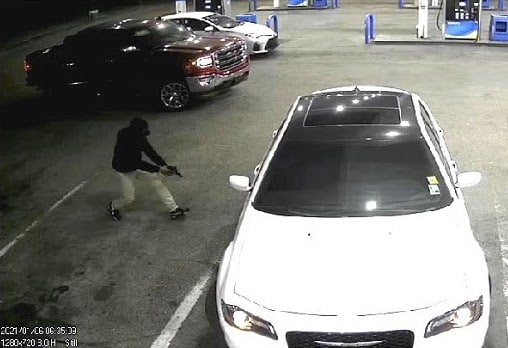 On Jan. 6 at about 6:30 a.m., the victim left his 2019 white Chrysler 300 bearing Louisiana license plate 293 DOW running while he entered the Magnolia store. A red GMC extended-cab pickup with a silver front bumper, seen in the parking lot prior to the victim’s arrival, pulled up near the Chrysler and a man (pictured) exited the truck armed with a firearm. The gunman entered the Chrysler and both vehicles fled the location.

Police cannot currently confirm any connection between the two incidents but are investigating any and all possibilities.

Anyone with additional information on either of these incidents is asked to contact NOPD Second District detectives at 504-658-6020 or call anonymously to Crimestoppers of Greater New Orleans at 504-822-1111 or toll-free 1-877-903-STOP.

One thought on “NOPD releases photos from parking-lot vehicle thefts”