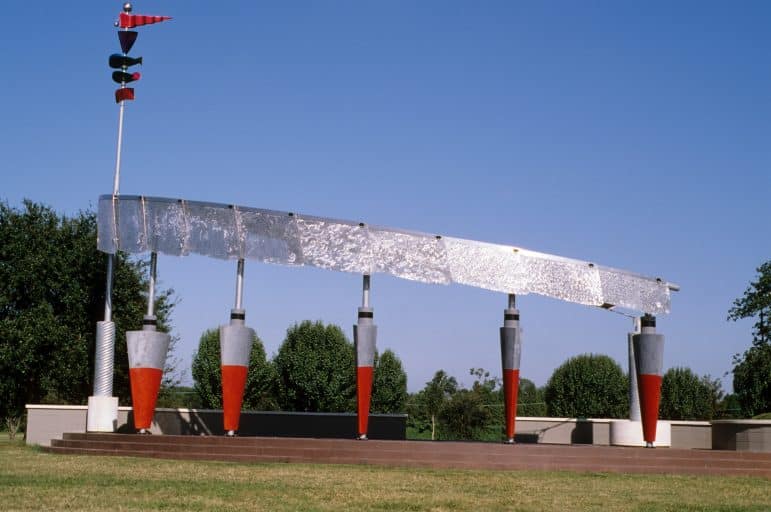 “A Stage for Viewing” pavilion and sculpture, photographed in December 2020,  is a gathering place at The Fly.

Who even calls the stretch of greenspace overlooking the Mississippi River “Audubon Riverview Park”? But that is its official name. The current pavilion in the park everyone refers to as “The Fly” has a history dating back more than 25 years.

That structure, officially named “A Stage for Viewing,” was damaged in October’s Hurricane Zeta in October, and the process of replacing its shredded roof is still in play.

It’s this structure’s predecessor that gave the stretch of land by the river its name. Few today can remember the original building that people thought resembled a butterfly. So the park gained the nickname “The Butterfly,” which was then shortened to “The Fly.”  The building, which housed concessions and restrooms, was actually supposed to resemble gull wings.

It lasted from 1969 to 1987, when it was hit by a barge. It was then deemed unsafe and demolished, but not until after parts of it fell into the Mississippi River.

Fast-forward five years, and the city, under the Sidney Barthelemy administration, decided another structure was in order. The Arts Council of New Orleans, a nonprofit that serves as the city’s official arts agency, and the Audubon Institute ran a competition to select a design for a new structure.

The concept was open ended — it could be a building, a sculpture or anything in between — but the team had to include both an artist and an architect. The winning team was sculptor Steven Kline and architect Michael Nius.

Nius said they named their collaboration Kline Nius Artkitecture to express the overlap between architecture and the fine arts they addressed in the design.

Their design approach was to capture the spiritual role of the Mississippi River. This encompassed Native American rituals along the river, its industrialization and the constant commercial boat traffic.

“I think of The Fly as the porch of the city, a zone in between the city and beyond,” Nius said.

They selected the highest natural spot in Audubon Riverview Park (the other little hills being man-made), as it was the perfect location for viewing the bending river.

The elements of the pavilion “A Stage for Viewing” refer to vessels and sailing, and the large pentagon patterns on the concrete floor refer to the look of dried riverbed mud. 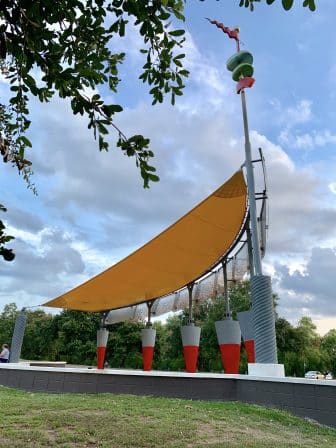 A Stage for Viewing

The original design called for a metal roof, but budget limitations made that impossible. As is often the case in design projects where budget and other constraints contribute to the refinement of an idea, this allowed the design to be reimagined.

So the design team re-grouped and stipulated a roof made of vinyl sailcloth, to resemble the sail of a boat. The fabric, known as “Enzo Ferrari cloth,” creates a contrast between a gossamer and temporal material of the roof and the weight and permanence of the steel and concrete structure that supports it. This contrast addresses the powerful and ever-changing river and our attempts to hold it at bay.

Its inauguration took place in 1994, under the then-new Marc Morial administration. The structure immediately became popular, and is the site of many family gatherings, yoga classes, picnics and just sitting on its curved wall looking out at the river.

It can be “reserved” on a first-come, first-served basis. So whoever arrives first can claim it for a function that day. “Once I was walking my dog in the late afternoon and witnessed a large four-generation African-American family reunion, complete with signs and banners decorating the structure,” Nius said. “I met the family member who organized the event, and she informed me that she had arrived before sunrise to secure the space.”

“A Stage for Viewing” has a unique position in that it is owned by the city of New Orleans but managed by the Audubon Institute. Its de facto caretaker is its architect, Michael Nius. Collaborating artist Steven Kline no longer lives in the area.

In January 2016, Nius was called to a meeting at the Audubon Institute and was informed that “A Stage for Viewing” was going to be demolished to make way for an enormous project of the Carrollton Boosters, to be named the Benson-Brees Soccer Stadium.  Nius was given the option of taking possession of any salvageable parts of the structure. 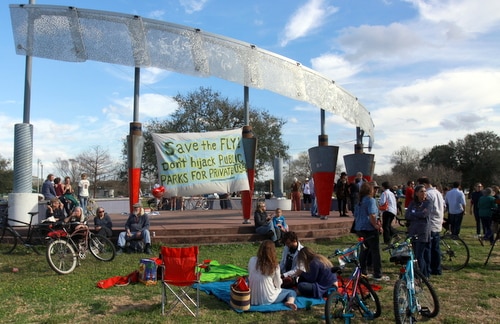 Neighbors rally around the sculpture at The Fly on Feb. 15, 2016. (Robert Morris, Uptown Messenger file photo)

This kicked off a firestorm of community activism that set out to save the greenspace and stop the building of what was to be a private, members-only facility that would encompass most of the greenspace used by the public.

“My two sons used to play in that greenspace, and I had been taking my kindergarten students there for many years. We even planted trees there in the mid-1970s,” said Carrollton-area resident Cindy Morse, one of the “Save The Fly” organizers. “The thought that one of the few free greenspaces along the river would be gobbled up for a private facility was untenable.”

By sheer coincidence, the river rose as “A Stage for Viewing” was set to be dismantled. Conditions were deemed unsafe to take down the structure and it was postponed.

This gave the concerned community time to organize their fight. In a matter of days, they gathered over 10,000 signatures in opposition to the stadium plan, and “Save The Fly” was born.

“It was the rising of the river that ultimately saved the current structure from demolition,” said Morse’s husband Bill Ives, also a lead organizer. “I’d say ‘the river knows best’ — and it helped save our greenspace.”

Another driving force behind the “Save The Fly” crusade was the fact that the users of the park are multicultural and reflect the city’s population.

After a protracted fight, City Council hearings and community negotiations, the unimaginable happened and the developers disbanded their plans and refunded the money they had raised back to their donors. The Fly had been saved.

In celebration, Morse and Ives helped raise the funds to refurbish “A Stage for Viewing,” and in 2017 it was repainted and a new roof canopy was installed.

Then along came Hurricane Zeta on Oct. 28, 2020.  Official reports describe widespread power outages and downed tree limbs as the principal result of the storm. 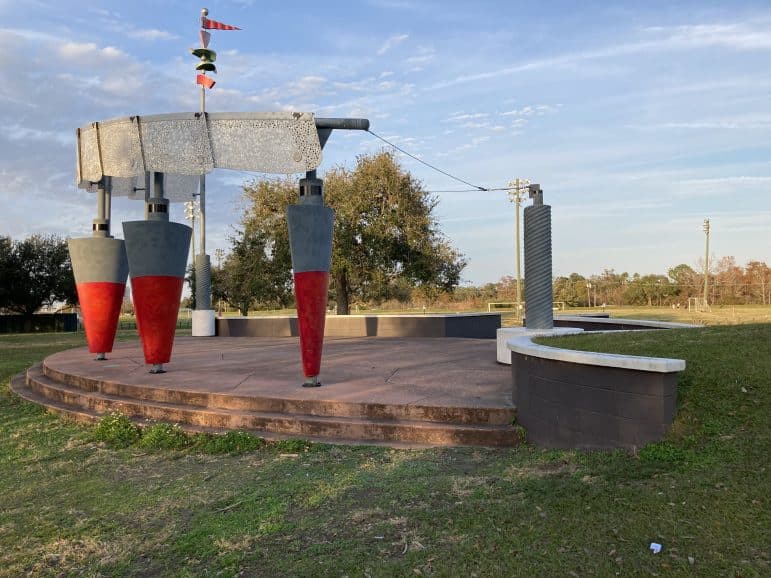 “A Stage for Viewing” remains without its shade-providing roof.

One of the casualties was the roof of “A Stage for Viewing.” That Enzo Ferrari fabric shredded and was taken down.

Once again, Nius has gotten involved. He was notified about the damage and he hopes it can be replaced without the public having to once again raise funds.

In response to questions about replacing the roof,  Audubon Institute Executive Vice President of Public Affairs and General Counsel Rebecca Dietz said: “We are aware of the damage to the structure and are evaluating our options for repair with FEMA. Many structures, trees and property throughout Audubon Park and the Zoo were damaged in Hurricane Zeta and we are continuing our full damage assessment.”

Even without its roof, “A Stage for Viewing” is still a wonderful place to sit and view the Mississippi River, and it’s big enough to socially distance in these pandemic times.