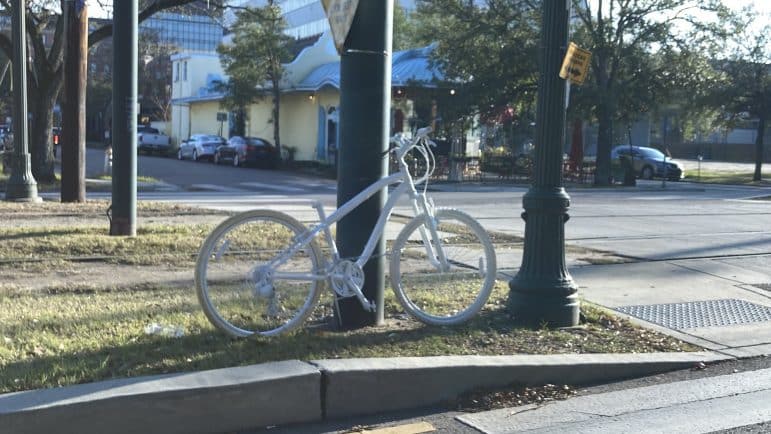 The ghost bike on St. Charles Avenue and Delachaise Street, where a cyclist was killed Dec. 29.

Just days after the a cyclist was killed in traffic on St. Charles Avenue, a “ghost bike” was placed at the site to honor his memory.

There are a number of groups that make and place these ghost bikes (not to be confused with the Germany-based bicycle company of the same name) around New Orleans. This one was made by Angie Bailleux, who has been fabricating the bikes for going on five years. 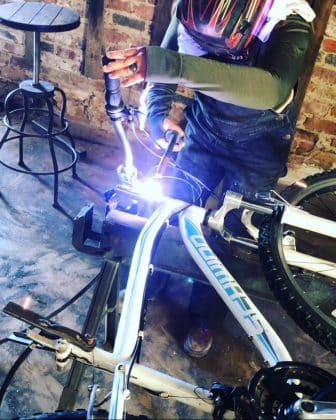 Bailleux said she does not know the victim. In fact, his name and identity have not been released, so as of now the ghost bike for him is anonymous.

“This is a community effort,” Bailleux said. “The main thing is that we all participate in life itself, and in caring and honoring a person’s memory.”

The bikes are installed as soon as possible after the news of a cyclist’s death becomes known. As of this writing, there have been five bicycle fatalities in just the past three weeks.

Once a fatality is announced, the word goes out on Facebook, Instagram and other social media outlets and to bike shops that a donated “beater” bike is needed to create one of the identifiable white reminders.

Ghost bikes are installed not only in memory of the deceased, but as a reminder to motorists to watch out for cyclists and share the road safely.

They use damaged bikes, in some cases deliberately left twisted to create an effect. The parts are welded together to prevent vandalizing, painted white and chained to a lamppost or telephone pole near the accident.

Do they ever get removed? Yes, Bailleux said. They are especially vulnerable in locations where the city thinks tourists are likely to see them, she said.

But the ghost bike groups try to replace them quickly. They persevere even after multiple takedowns. Fabricators sometimes resort to placing the bike in the closest friendly spot, where a property owner has agreed to host the memorial. 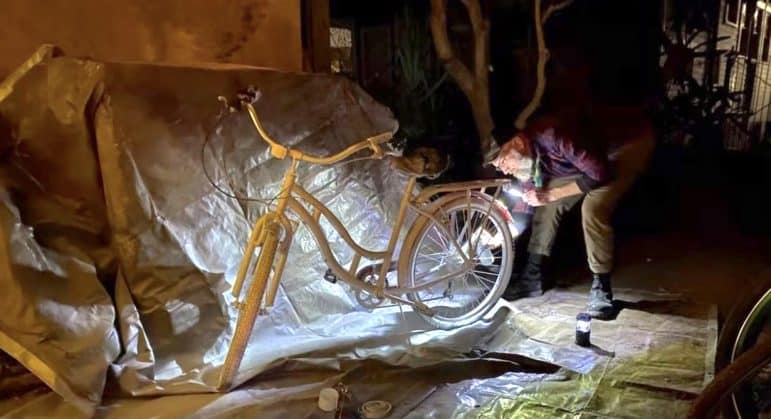 A ghost bike is prepared for pubic display.

This practice isn’t limited to New Orleans. These striking reminders can be found nationwide and in more than 200 countries, with thousands of ghost bikes honoring fallen cyclists.

Locally, once the victim’s identity is known, the group contacts the family so they will know their loved one has been honored and remembered. At the minimum, the person’s name is added to the bike. But in some cases, the families hold memorial ceremonies on site and add other items to the ghost bikes. Some get loaded with flowers and other tributes. 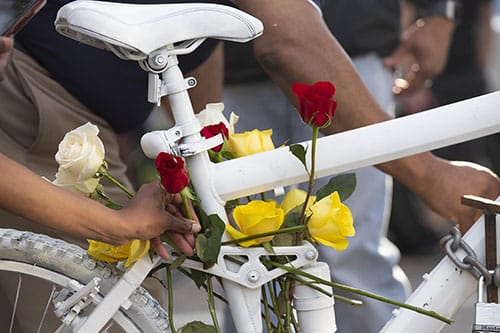 Alex Fleming, a cyclist who has been involved in the ghost bike effort, is taking things a leap forward by starting a nonprofit organization, NOLA Ghost Bike Dedication Fund. The fund would help victims who survive bicycle accidents with medical expenses and help the families of those who are killed with funeral expenses.

He also emphasized the community effort and participation in the ghost bike memorials. “New Orleans has catching up to do with the rest of the country to become bike-friendly,” Fleming said. While the city has made steps in the right direction, too many streets have poor infrastructure, poor lighting, a lack of crosswalks and the like, he said.

“This winter is becoming the ‘winter of death’ with a record number of bicycle fatalities. It reminds me of the ‘summer of death’ in 2016,” Fleming said.

Biking has improved in New Orleans, with lower risks, but the city still has a long way to go, said Dan Favre, the executive director of Bike Easy. He cites the Dec. 29 fatality on St. Charles Avenue as underscoring the need for more connected bike paths.

“To avoid deadly crashes like this we need streets designed for all modes of transportation,” he said.

There are many people for whom bicycling is their only means of transportation – to work, to shop, to live everyday life. For those riders, as well as those who ride for fun, exercise and recreation, riding can be harrowing.

One Uptown resident who depends on her bike to get around told the Uptown Messenger that motorists do not respect bike lanes or look before opening their car doors onto a bike lane. Drivers not signaling is another big complaint among cyclists.

And she also echoed what Favre and Fleming said: The streets in New Orleans can be very unfriendly to cyclists. The potholes and the lack of infrastructure and connectivity of bike lanes all contribute to the injuries and fatalities.

The ghost bikes that populate the cityscape of New Orleans are a stark reminder that we do have a long way to go to ensure the safety of the city’s cyclists.