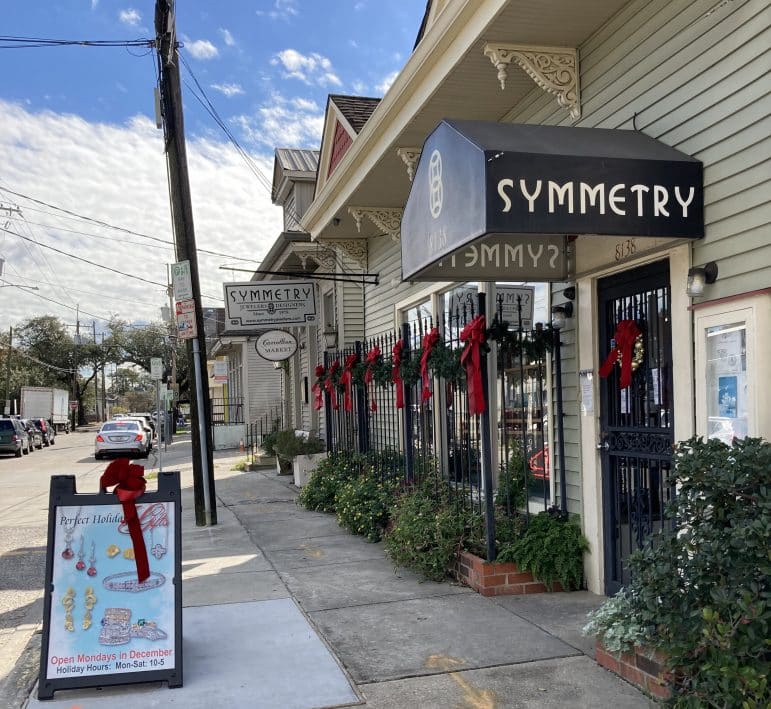 Symmetry Jewelers on Hampson Street in the Riverbend

Behind the glittering offerings at Symmetry Jewelers lies a pandemic story despite how very busy they are and have been.

Like other non-essential businesses, Symmetry Jewelers closed down when it was mandated on March 22. They reopened a couple of months later, on the first day it was allowed.

They bought masks for staff and customers alike, installed sanitizer stations and social-distancing markers, and developed a regimen for regular sterilizing. And like other local businesses, they had to register with the city to be permitted to open up.

During those two lockdown months, the business took out a line of credit to pay employees while they applied for the Paycheck Protection Program. They were approved for the program, but the rules prohibited paying any past expenses, so the line of credit could not be reimbursed.

“Thankfully, we did not have to lay off anyone,” said owner Richard Mathis. “But despite how busy we are, we also have not hired anyone new.”

By June or July, Symmetry Jewelry employees noticed a significant increase in business, especially for repairs and re-designs.

“People came in with lots of jewelry,” said Chief Operating Officer Connie Thompson, making a bowl with her hands to emphasize the point. “As people were at home, they had the time and the incentive to go through drawers and bring in jewelry they had been wanting to repair for a long time.”

Mathis adds, “We also have gotten a lot of work re-designing pieces that customers felt were outdated or weren’t their style.” So the repair and design business has increased significantly.

“People came in with entire jewelry boxes and dumped them out for us to determine what was real, what was costume jewelry, and advise them about repairs and re-dos,” Mathis said. “It was amazing how many people came in with piles of pieces.”

In terms of regular clients, many of their older customers are not venturing out, but now the wedding and engagement business has picked up. For a while, those kinds of purchases were on hold as uncertainty about the future caused couples to put off buying rings.

Now, with the promise of a light at the end of the tunnel, people are feeling like they can plan once again.

The end-of-year holidays are a busy time for Symmetry Jewelers, and this year has been no exception. There seems to be a steady stream of customers coming to the shop and calling on the phone.

But the pandemic has changed their inventory and their sales. “We are selling jewelry at a lower price point than before the pandemic, ” Mathis said. Although they have always had a range of prices, the purchases these days are at the lower end of the scale.

Richard Mathis and his brother Tom have been in the jewelry business since the late 1970s. The name “Symmetry” comes from the exact proportions of gemstones’ cuts.

Tom Mathis has recently retired from the business but maintains his own design studio. He began designing rings and other jewelry in silver, and as his designs multiplied, he realized he could use his brother’s help in the business.

“I’ve always been fascinated with rocks and gemstones since I was a kid,” Richard Mathis said, “so I was happy to get into the jewelry business.”

They had a shop in the French Quarter and in 1993, they moved to the current location in the Riverbend. Their commercial building on the corner of Hampson and Dublin streets was the former site of Mitch’s Clothing and it had been vacant for five years. The Mathis brothers made a successful offer to purchase it from the family that owned it, and renovated it for their purposes.

The Mathises studied at the Geological Institute of America to gain deeper knowledge of the materials. According to Richard, Tom was always more of the artist and designer and he was more about the business side of things.

He credits word-of-mouth and good reviews on social media that keep the business coming in. And keep coming in it does.

One thought on “Silver Lining: Shop discovers jewelry repair is another pandemic trend”