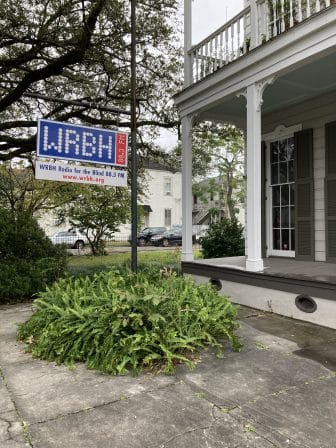 The WRBH 88.3 FM studios, a landmark on the corner of Magazine and Foucher streets, has a distinctive spot in the broadcasting world. It is the nation’s only full-time FM reading radio service and one of only three such stations in the world, according to its website.

WRBH, also known as “Reading Radio,” turns the printed word into the spoken word so that vision-impaired people can receive the same ease of access to current information as their sighted peers.

Two other stations share that mission: Minnesota Radio Talking Book Network, a sideband service not on the FM dial, and Vision Australia Radio Network. The latter is a network of eight radio stations whose programming and structure are similar to WRBH but do not operate 24 hours a day, seven days a week. The Australian group recently reached out to WRBH to share information, ideas and forge a relationship.

The target audience for Reading Radio includes the blind and illiterate, as well as individuals who are unable to read due to illness, spinal cord injuries, eye muscle damage, learning disabilities, lack of access to print media and loss of vision due to age.

While the majority of other reading services for the blind use mechanized voice software, WRBH provides its variety of programming via the human voice  — thanks to its dedicated crew of volunteer readers.

The station began as the dream of a Loyola University math professor, the late Dr. Robert McClean, who was blind. He wanted to establish a reading radio station that would operate on the FM dial, rather than on sideband frequencies that require special radios to pick up the signal. In 1975, he began purchasing airtime from WWNO-FM and rented office space in the Lighthouse for the Blind.

“I’ve been listening to Reading Radio since their early days at WWNO,” said New Orleans native Francis Matherne. “I used to beg people to read me stories, and now I just turn on the radio.

“I like that I can be independent and can decide when to tune in,” Matherne continued. “I always listen to the news, and novels read on air. And I also follow the supermarket coupon ads.”

The building not only houses the studio and offices, it generates income for the station. There are medical offices on the second floor, and the restaurant Cavan, across the street, rents the parking lot after hours for its patrons. Another income stream for the nonprofit is recording Tulane women’s basketball and baseball games.

Internet technology allowed WRBH to expand its programming in 2000 to a global audience via live audio streaming and podcasts.

Fourteen years later, the station partnered with Hero|farm, a New Orleans based marketing and design firm, to make its website fully compatible with screen-reader software. Screen-reader software makes any computer information — including images — accessible to the blind. WRBH works to ensure its current website is 100% screen-reader friendly.

Now the station impacts the lives of the visually impaired not only in the New Orleans region but also all over the world. The small nonprofit does not have the capability of tracking audiences, but anecdotally they know their listeners are far and wide.

WRBH started by reading the newspaper on air. About the time it moved into the building on Magazine Street, the programming expanded along with the space.

Its programming is available 24 hours a day, 365 days a year thanks to nearly 150 volunteers who donate nearly 5,000 hours annually.

The use of human, rather than mechanized, voices makes WRBH’s programs appealing to the newly blind or those who have experienced age-related vision loss; it can take several years for the untrained ear to become accustomed to the speed and cadence of the mechanized voice software.

WRBH’s content is also of interest to the general public – who tune in to listen to the news, event listings, best-selling fiction and nonfiction books, short stories, magazine articles and other programs aimed at fostering cultural, educational and emotional enrichment.

The wide array of content is available through volunteer readers. “Many of our volunteers have been with us for 10 years plus, and we often find ourselves turning away new volunteers because we don’t have the capacity to meet their needs,” said Executive Director Natalia Gonzalez.

There is an audition process that is screened by a committee before someone is accepted as a reader. The commitment is one hour per week. There is also an extensive training process covering skills such as microphone techniques, pauses for mistakes, timing and using the clock.

René Maggio began volunteering at WRBH about eight years. He was motivated to become a reader because his mother went blind and he wanted to read to her. He began weekly, and after moving to the north shore he went to the station every other week. He reads whatever is needed, he said.

Then March 2020 happened, and the station was closed to volunteers and staff. Maggio had the capability to record at home because he had narrated a commercial audio book by a New Orleans author.

He suggested that the station try that as a solution to the “pandemic problem” of not being able to go to the Magazine Street location to record. It worked and has been successful because he got other volunteer readers and staff involved to record at home. Maggio calls it the “Read @ Home” program.

The way it works for Maggio is the station sends a script, then he records and edits it and uploads it for station staff to tweak and then broadcast. Recently he was asked to read a book, “City of a Million Dreams: A History of New Orleans at Year 300.” Books are read at the reader’s own pace, and no part will be broadcast until it is completed. So his current book schedule is devoted to that.

He reads at least once a week, sometimes more as relief for other readers. Now he is known as the Saturday afternoon “Newspaper of the Air” guy.

“I am proud to be a small part of WRBH … This is one thing that helped me endure 2020. Doing something for others,” Maggio said via email.

The station currently operates on a modified COVID schedule as all the recording is being done by a handful of volunteers who have set up their own at-home studios.

“This pandemic has truly been a testament to the loyalty of both our volunteers and our staff,” said Gonzalez, the station’s executive director. “I am so proud of the fact that when the city shut down, my production staff were ready to begin broadcasting from their respective houses, and we did not miss a day of broadcasting.”

They started small, gradually adding to the remote reading crew. Now up to 20 volunteers and all five staff members are reading, Gonzalez said.

“There have been very few challenges because of the wonderful people — staff and volunteers — who are a part of the WRBH family…” she said. “I love to think this is what makes WRBH so special — the human element.”

The biggest pandemic challenge, she said, is losing regular in-person contact with the staff and volunteers. “I realize that what has made my job so special for the past 18 years is no longer a part of my daily life [because the office is closed],” Gonzalez said. “It’s been hard.”

Gonzalez came to WRBH after working for eight years in the arts-in-education nonprofit sector. She began as the development director and after three years became executive director, literally on the day Katrina made landfall.

Despite the bad timing, Natalia said, “that experience turned out to be so beneficial as I got to reinvent both the station and my position — and WRBH has flourished. I love WRBH as it truly is a little microcosm of what makes New Orleans so special — the people, the many accents, the laughter and the joy.”

In addition to reading the major daily New Orleans newspaper and other local news publications, the staff and readers select novels to be read. The current novels are “There There” by Tommy Orange, depicting the urban Native American experience like never before, and “A Gentleman in Moscow,” the best-selling, award-winning historical novel by Amor Towles.

Before the pandemic, WRBH had shows geared toward Spanish-speaking, Haitian and Vietnamese communities. These are on hold until the readers can come in person to record at the station.

Of the in-house shows, “Charlie’s Music Show,” where host Charles Smith interviews musicians of all genres, is the only one that is being produced in the COVID era. Others usually include “Writers Forum,” which provides an opportunity for local authors to discuss their work, and “New Orleans by Mouth,” moderated by Amy Sins.

The owner of Tubby & Coo’s Mid-City Book Shop and WRBH volunteer reader Candice Huber produces a literary podcast called “Novel Ideas” which can be streamed here. This gives audiences a different experience from the mainstream news and literature, as this bookstore is known for its geeky sci-fi and fantasy offerings. Like the foreign language shows, these are also on hold during this time of the pandemic.

To further its outreach in the community, the station collaborates with the Lighthouse for the Blind and the Blinded Veterans Association, organizations that share common goals or serve the blind and print handicapped in other ways.

Since 2009, WRBH has partnered with Entergy to broadcast “Going Green,” to educate listeners on energy efficiency. The Young Leadership Council partners with the station on fundraising events and provides volunteers from its organization.

WRBH has been recognized with several awards including a Proclamation of Recognition for 30 Years of Service from the City of New Orleans in 2012, the 1999 Governor’s Media Award and the 1998 Mayor’s Medal of Honor. In 1990, was given the 257th “Point of Light Award” conferred by 41st President George H.W. Bush.