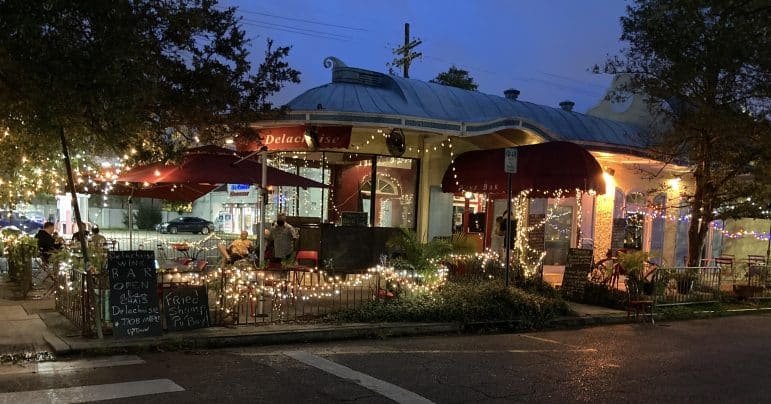 When The Delachaise first opened at 3442 St. Charles Ave. 17 years ago, it had a patch of grass out front where owner Evan Hayes hoped to build an outdoor space.

Then 10 years ago, Entergy tore up that section of the avenue to install a new gas line, and Hayes used the opportunity to pave the area and create a patio. “That doubled our business,” he said. “And ultimately, this helped us during the COVID-19 pandemic.”

Hayes, the owner of The Delachaise and Chais Delachaise, further uptown at 7708 Maple St., loves to tell people about his restaurants. And fortunately for him – and his customers – both places have ample outdoor spaces in the time of social distanced outdoor dining.

Hayes had worked in the restaurant business for years when, in the late 1990s, he began working in the wine industry. He got to know vendors and wines and felt that he had the background to open The Delachaise.

“One thing I learned in the wine business is to let people have a taste of the wine they want to try,” Hayes said. “This is a way to build relationships, and a good way to interact with people.” The selection of wines at The Delachaise is staggering, and there are also substantial beer and spirit selections.

It is named for its location in Faubourg Delachaise between Delachaise and Aline streets, both named in 1855 by the widow Marie Antonine Foucher Delachaise. Given the task of naming the streets in the newly subdivided property, she named Delachaise Street in memory of her late husband, Philippe Auguste Delachaise, and Aline Street for her daughter Aline. She probably never imagined that, a 165 years later, a lively wine bar would occupy the space on St. Charles Avenue where the two streets come together.

The building, which Hayes calls “Mission Metro” for its resemblance to Paris metro stations, was built in 1904 as a flower shop. Considered a mix of Spanish Mission style and Art Nouveau architecture, it originally housed the Avenue Flower Company. In the interim between the flower shop and the wine bar, there have been a dress shop and an Italian restaurant, among others, in the building. And since 2003, The Delachaise wine bar bistro has been in the distinctive building.

The Delachaise has a 30-foot bar, or as Hayes calls it “le grand comptoir” – the large bar. Madame Delachaise would approve. The place is cozy, the kind of place people go on first dates. Women – and men – feel comfortable going there alone. Birthdays and anniversaries are celebrated there. 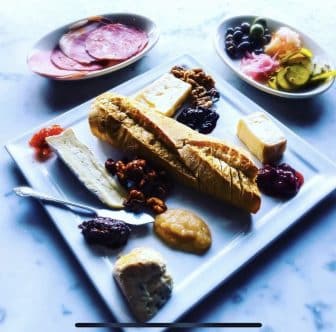 The cheese and charcuterie plate is a popular menu option. (courtesy of The Delachaise)

The most popular food items are their goose fat French fries, the flank steak bruschetta and the cheese and charcuterie plate. And now chef Patrick Nolan is branching out with New Orleans’ beloved barbecue shrimp, for example.

All customers who sit outside in the patio sooner or later are serenaded by Mike, a self-taught saxophone player. He showed up after Hurricane Katrina and has been a fixture on that section of St. Charles Avenue ever since. When his playing gets to be too much, the staff gently directs him to move away and play softly. That usually works for a while before the process repeats itself.

Playing off the success of The Delachaise, Hayes opened another restaurant, Chais Delachaise, 13 years later, in 2016. It is in an old house on Maple Street, in the university section. The building is set back from the street, creating a space and a front porch that spans its width. 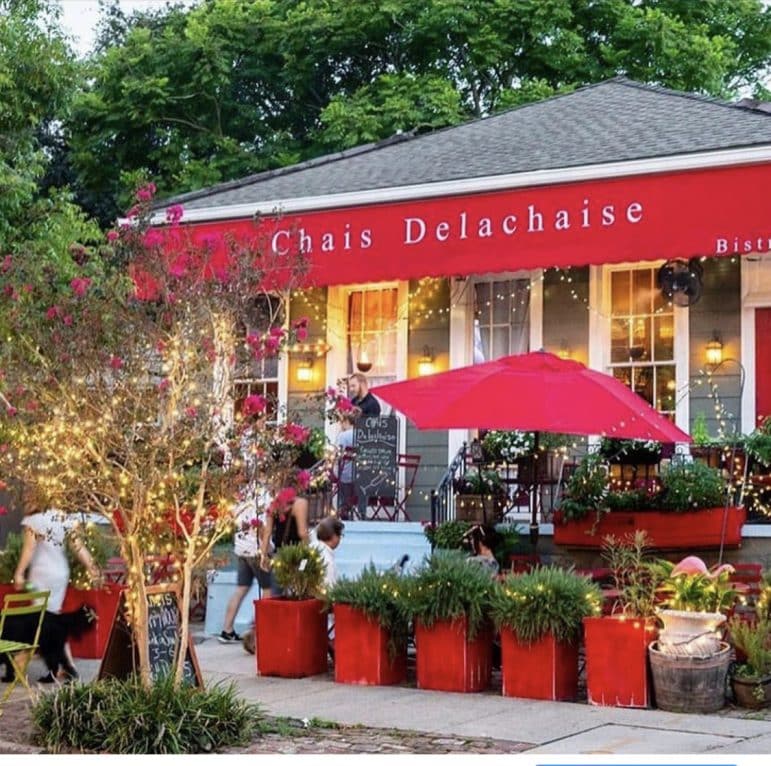 Chais Delachaise caters to the neighborhood, to families and students. Its name, of course, includes that of the wine bar bistro on St. Charles Avenue and adds a word play as well. Chais refers to an above-ground wine cellar in French.

Like The Delachaise, the second has ample outdoor seating. And like the first restaurant, Chais Delachaise has those popular goose fat fries on the menu, and its new chef, Barry Credeur, is adding dishes like homemade pâtés and pastas.

In mid-March, both restaurants had to close due to the COVID-19 pandemic lockdown. Employees filed for unemployment, and then the company made a successful application to the Paycheck Protection Program, known as PPP. The employees then had a choice: stay home and collect unemployment, or come back to work and use the shuttered time to renovate and do repairs that had been on hold for a time. They came to work.

The Delachaise space was renovated, chairs and banquettes were re-upholstered, and two rundown upstairs storage spaces were converted to offices and a storage space, all with air conditioning. Now wine could be stored there — it became a chais. “Our then-new chef, Patrick Nolan, only a few months on the job, took the kitchen apart, cleaning and restoring every bit of it,” Hayes said. “And I made the lunch every day.”

Chais Delachaise also got its share of sprucing up. The configuration was changed and the walls were repainted. The floors and the bar also got a makeover.

Employees whose jobs had disappeared in the pandemic did most of the work. And the PPP made it possible to pay their salaries.

Evan Hayes also took advantage of the lockdown to expand the outdoor seating area of The Delachaise along Aline Street. It was able to open in the summer with limited outdoor seating. It closed again when employees had been exposed to the virus, but was open at the end of August.

At Chais Delachaise some employees had left town to volunteer in the aftermath of Hurricane Laura, curtailing its reopening. But by mid-October, both had reopened.

But opening two restaurants during the pandemic has had its challenges. The prices of meat, especially beef and pork, shot up 40% over the summer but went back down in the fall. Mussels and oysters have not been reliably available. And then there were the safety protocols, the regulations, and changing state and city mandates.

But at least, because both places had outdoor spaces, things could move forward. The Delachaise is operating at about 50% capacity; Chais Delachaise at a quarter or less. But both current operations are fully staffed.

“I look forward to full houses,” Hayes said, “and bringing back Oysters Delachaise, in absinthe cream sauce, when the oyster supply is on track.” Customers agree.

One thought on “Patios, a porch and the PPP offered lifeline to Delachaise bistros”