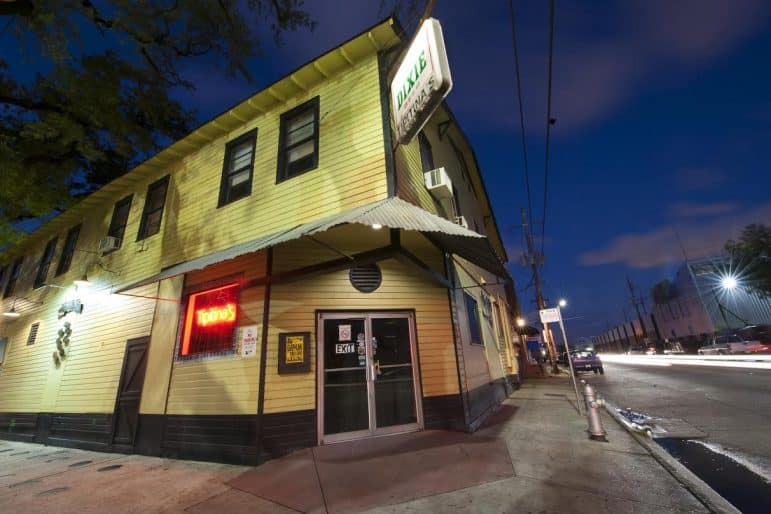 Ride by the yellow corner building at Napoleon and Tchoupitoulas these days, and you see a line of people spread out on the sidewalk to order coffee at a to-go window. Yes, coffee.

Since 1977, this has been the location of the iconic New Orleans’ music club, Tipitina’s. Originally intended to showcase the life’s work of Professor “Fess” Longhair, born Henry Roeland Byrd in 1918, at the end of his career, it quickly grew into one of the most beloved music venues in the city.

It has survived changing ownership and changing musical climates, as well as hurricanes, over the years, even briefly closing in 1984. But when the current owners, members of the band Galactic, bought it in 2018, they did not imagine the musical climate would change like it did on March 13, 2020.

Galactic, which had been performing at Tip’s since the group formed in the mid-1990s, was still playing regular gigs there when the pandemic lockdown hit.

In an effort to stay relevant and in business, Tipitina’s has reinvented itself to produce a myriad of activities that are virtual, socially distant and possible in the times of COVID-19 — such as a star-studded fundraiser honoring Professor Longhair to be streamed Saturday (Dec. 19).

The club’s survival strategy is continually evolving. “In the ever-changing world of today, planning seems to be a moving target,” said Brian Greenberg, the club’s general manager. “It is hard to solidify anything more than two months out.”

Tipitina’s made a successful application to the Paycheck Protection Program. This allowed the club to pay four full-time employees, as well as to do maintenance and some renovations that had been accumulating for a time. However, those funds are long gone, with no clear promise of a renewal. 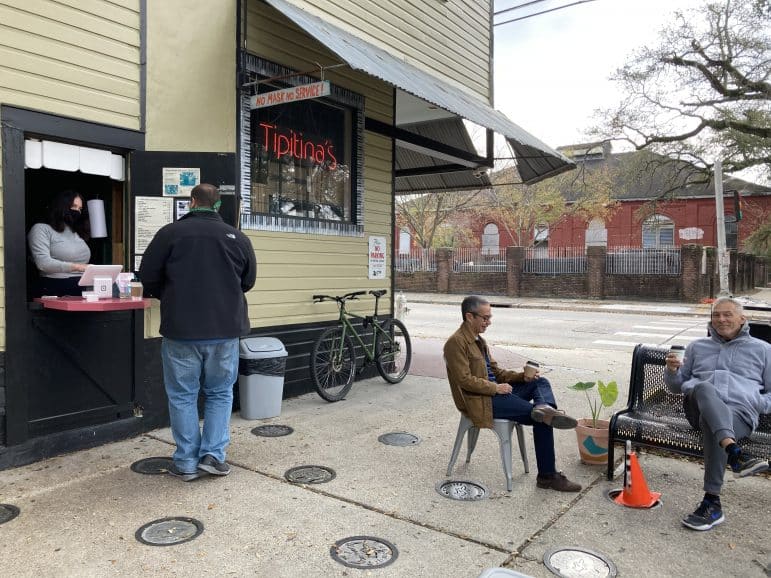 The coffee shop came about during the summer when HEY! Café on Magazine Street approached Tip’s with the idea of bringing an extra espresso machine to the club and renting space for a pop-up. It was just about to open when the coffee shop owners were notified that the building on Magazine Street, next to Ms. Mae’s, had been sold and after 11 years, their shop needed to move out.

So they moved their operation to Tip’s, and the mutually beneficial arrangement is on for the foreseeable future. It operates seven days a week from 7 a.m. to 2 p.m.

Another new edition is Tipitina’s TV. It started with a series of six ticketed concerts Aug. 15 through Sept. 19 with stellar lineups; and again Oct. 31 through Dec. 12. The next TV presentation up is NOLA Resistance, a music collective with noted jazz and funk musicians, all with years of experience and success in their own right. This will stream for free on Dec. 29.

Saturday’s virtual extravaganza concert will be held in honor of Professor Longhair’s 102nd birthday on Dec. 19. It will feature both archival footage and new content of nearly 50 performances, hosted by DJ Soul Sister. Payment can be made during the show by texting “SaveTips” to 24365.

This is another one of the ways Tip’s is raising money for the cause. People can text anytime and have their donation added to their phone bill or they can use Venmo. Tip’s also holds raffles with prizes such as a signed trombone from Trombone Shorty, free lifetime access to Tipitina’s shows and even a bike. 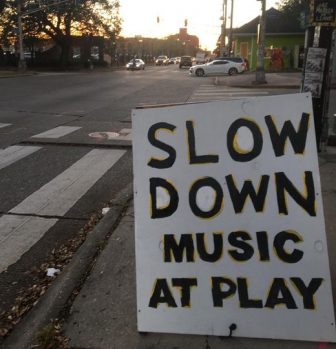 Bloody Mary pop-ups also happen Saturday afternoons from noon until 2 p.m., also with weather permitting. The Bloody Mary (and beer for those who must) window is farther down Napoleon Avenue so the lines do not cross with those for HEY! Café.

Merchandise has become a more important income stream in the time of COVID. Although it doesn’t make up for lost ticket and beverage sales, Greenberg said, it has been a steady moneymaker. Its Internet sales reach national and global audiences as well as its loyal local following. All the items are both made and handled locally to help employ more New Orleanians.

Tip’s, like many other independent performance venues, has been monitoring the “Save Our Stages Act” in the U.S. Senate. If the bill is signed into law, grant recipients would receive 45% of 2019 gross revenue or $12 million, whichever is less. The other major benefit is that funds may be spent until the end of 2021 and used for operating expenses among other basic business costs. 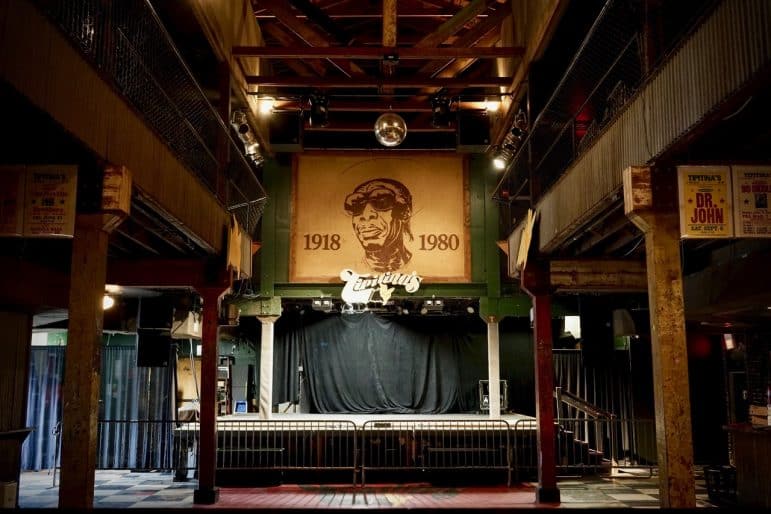 The stage has been empty since March.

And does Greenberg think musicians will be on board to take the COVID-19 vaccination? It seems to be split between those who want to take it ASAP and get back to playing music, and those who are skeptical. They intend to wait and see how it works out for others, who takes it and what adverse reactions might happen.

Tip’s reach, extending beyond the club, includes a separate foundation. The Tip-It Foundation was created “to support and promote the future of the Gulf South’s music, culture and heritage via the Tipitina’s venue and brand,” according to its website.

Although Tip’s has plenty of out-of-town fans, they believe it is locals who will keep their business alive. As Greenberg put it: “It is the people who live here who will decide which businesses succeed or fail. By supporting places like Tipitina’s, the money stays in the community.”

For more information, go to fandiem.com/savetips. 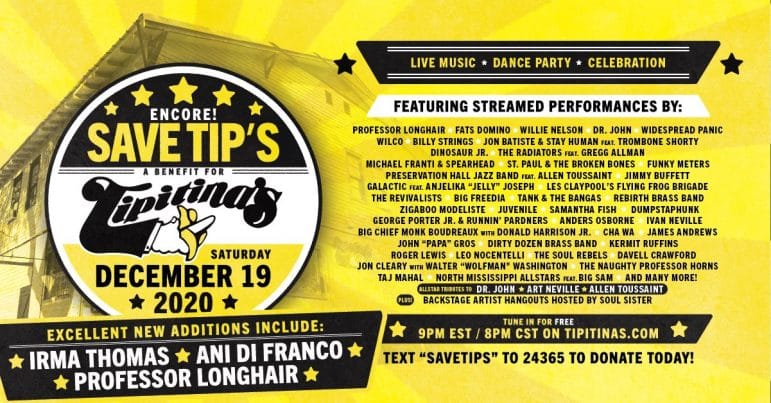