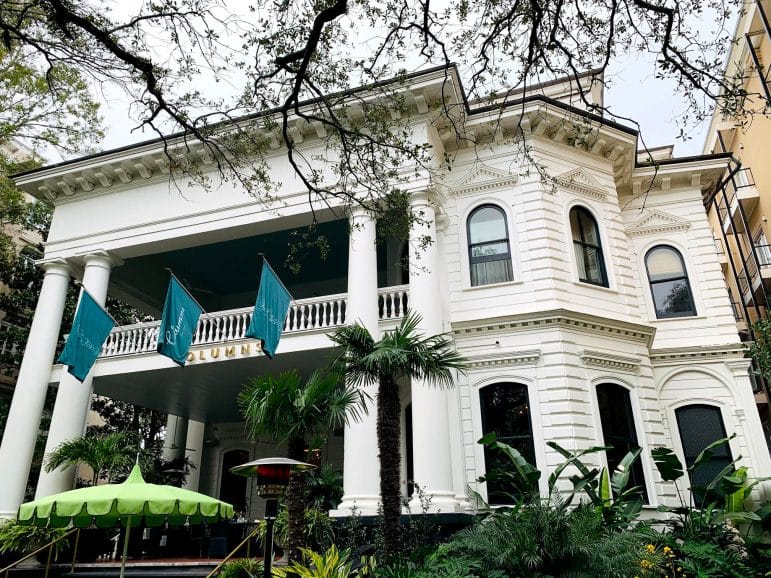 It wouldn’t be overreaching to say the Columns is beloved by generations of New Orleanians, as well as those visiting the city. The large front porch framed by imposing Doric-style columns has been a favorite for cocktails and watching the scene unfold along St. Charles Avenue.

Charming and old world, it is a place where first dates, proposals, break-ups and the accompanying drowning of sorrows, sharing of secrets, love-at-first-sight, weddings, debutante soirees and celebratory fetes happen on a daily basis. If walls could talk, the Columns’ walls could fill three volumes, easily.

So when rumors started swirling in late 2019 that it was going to be sold by its longtime owners, Claire and Jacques Creppel, people were understandably worried. The Columns had survived hurricanes, decay, demolition and multiple spilled drinks … now what? A glow up. (It’s a good thing.)

The new owner is hotelier Jayson Seidman, one of the developers behind The Frenchmen, on the Marigny-Quarter border, and The Drifter, a 1950s-era Tulane Avenue hotel refurbished as an homage to that era, but with stylish updates that include original contemporary art. He is also co-developer of Hotel St. Vincent, scheduled to open in 2021, in the Lower Garden District.

A cognoscente of historic New Orleans properties, Seidman is respecting former mansion’s architecture, letting it guide him and his team while also adding some modern updates.

“While the Columns is an iconic classic property,” Seidman said. “We must be reminded to have some fun and not take ourselves too seriously. This is evidenced by our love of color and mix of interior details from around the globe.”

Expect “the unexpected,” said Seidman, adding as a reminder that the building has always morphed and changed.

“We are not making major changes,” he affirms, “we are peeling away the layers.”

Those layers had their foundation in 1883, when businessman Simon Hernsheim purchased the lot at 3811 St. Charles Ave.  Hernsheim, a New Orleans native, was in the tobacco trade, and his La Belle Creole Cigar Factory had become the largest in the country in the 1880s.

And with success comes a grand house in a prestigious location.

He chose the lot he wanted, but there was already a home on it: a Swiss chalet-style house designed by architect Edward Gottheil, built between 1868 and 1869 for Cuthbert Bullitt, a businessman and customs collector under President Abraham Lincoln. Bullitt was “a connoisseur of beautiful things,” according to a 1924 New Orleans States article.

Bullitt sold the home in 1881 to Frederick Ford Hansell, who then sold it to Hernsheim for $17,200 two years later. Hernsheim then moved the Swiss chalet house to land he bought on Carondelet Street in July 1883. Hernsheim subsequently sold the chalet and property for $9,500 on May 9, 1884. The house is still there today.

For his new home on St. Charles Avenue, Hernsheim hired architect Thomas Sully. Sully designed an Italianate style home, its soaring a octagon-shaped, four-story tower on the downtown side of the house and first and second-floor porches highlighted with segmental arches.

No expense was spared — the interior standing out for the mahogany woodwork on walls, ceiling and the grand staircase, as well as stained glass, most notably seen at the ceiling above the staircase.

“The cost of the new building, it is believed, will not fall short of $40,000,” stated a September 1883 article from the Daily Picayune. The building was completed in 1884.

Hernsheim moved in with his family, but tragedy hit in 1895 when Hernsheim’s wife and sister passed away. His daughter had married and moved to St. Louis, and his three sons were attending school out of town, leaving him lonely in the big home. Three years later,  Hernsheim committed suicide by swallowing potassium cyanide at his cigar factory at the corner of Julia and Magazine streets. 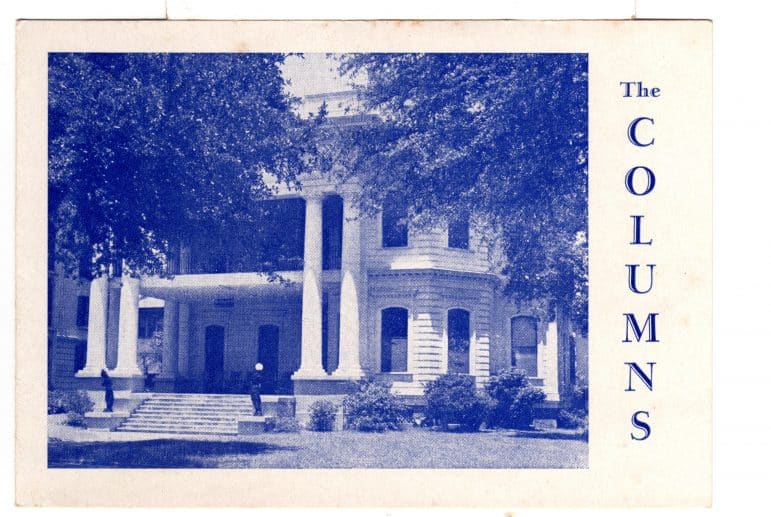 Promotional postcard for The Columns Hotel from the 1950s.

It was eventually sold to Hubbard Moylen Feild in 1914. When the Hurricane of 1915 hit New Orleans, the top two floors of the tower were taken down as were the arches — creating the iconic Columns façade we see today. It became a Colonial Revival with Doric columns spanning two floors.

The Feild family ran it as a boarding house through the Depression and two World Wars. In 1953, when it was sold to Richard Baumbach, who operated it as The Columns Hotel, though in essence it was still a boarding house. The property was highlighted by a bar and sitting area on the front porch.

In 1972, CP Investments, consisting of Harry G. Caire and Ed Prendergast, bought the hotel along with the adjacent property bordered by Peniston Street. They hoped to develop each property into high-end condominiums.

In 1976, they applied for a demolition permit, stating the building was “creating a hardship on the existing owners due to the high cost of renovation and economic use after renovation,” according to a document submitted by Caire to the Historic District Landmark Commission.

Neighbors objected, and the Unity Temple, catty-corner to the Columns, was among those that offered to buy the building. There were those who recommended demolition, such as Cimini Meric Burns Counce, an architecture and engineering firm, stating in a letter to Prendergast: “In light of our findings and after reviewing the project with our mechanical, electoral and structural consultants, we feel that it would not be economically feasible to renovate this building.” 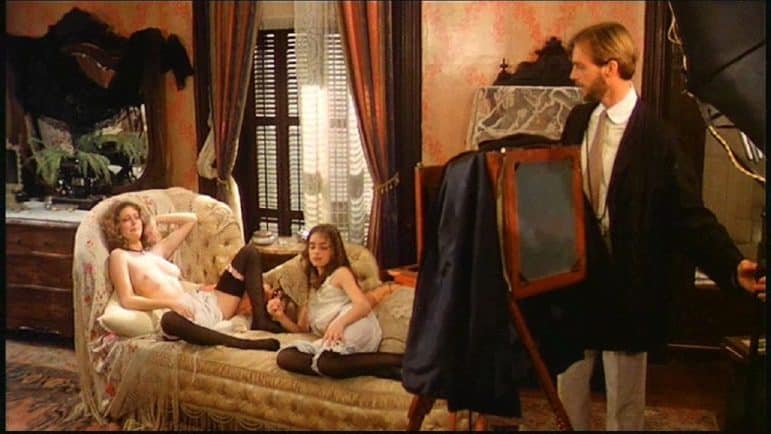 Then Hollywood stepped in. “Pretty Baby,” the 1977 film about Storyville starring Brooke Shields, shone a much-needed spotlight on the building, and allowed for some renovations to the building so the film could shoot. It is still a favorite spot for filmmakers, also appearing in “Treme,” “12 Years a Slave” and “All the King’s Men,” to name a few.

The biggest surprise was when the dropped ceiling, installed decades earlier, was taken down in the bar area, then highlighted by a disco ball hanging from the ceiling. 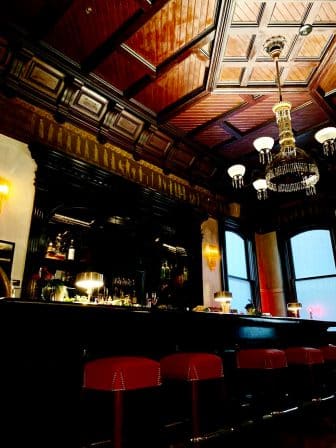 The bar’s ceiling had been covered with acoustic tile. (Sue Strachan, Uptown Messenger)

The Creppels hired Peter Frost to help do some restoration work, and when he went in the crawl space above the bar to install a chandelier, he found something else: a coffered ceiling with a painted frieze along the border. The frieze featured figures and motifs usually seen on ancient Greek urns.

It was restored by Merri Pruitt, a Texas artist, who also painted decorative motifs throughout the rest of the downstairs rooms.

The Creppels had a lot of work to do, such as shoring and leveling the building and adding a new roof. The number of rooms was reduced, and the first floor was converted to public area.

Despite neighborhood resistance, they opened the Victorian Lounge — located in Hernsheim’s dining room — and eventually added food. The duo placed the house on the National Register of Historic Places in 1981.

Among some the changes the Creppels sought were to add a circular drive in front and a stand-alone “The Columns” sign – a four-year issue from 1983 to 1987. Even though the changes had been approved, they ultimately weren’t built.

In 2019, the Creppels sold the building to Seidman. 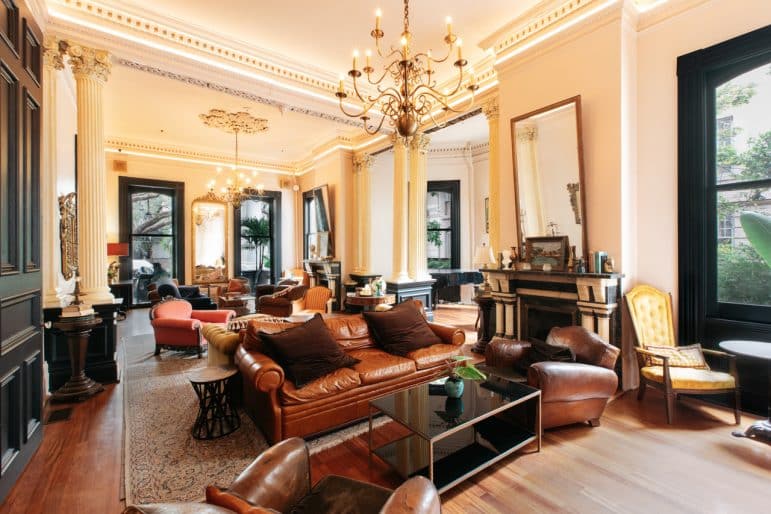 The Columns parlor (Arnaud Montagard, courtesy of the Columns)

Bringing out the beauty

Seidman is no stranger to South or New Orleans, as his mother’s family is from here. Originally from Mobile, Alabama, he grew up in Houston and attended Tulane University A.B. Freeman School of Business. A post-collegiate career mainly in New York City in investment banking and real-estate development prepared him for his future career as a hotelier.

The Columns is a collaboration with his family, which is now includes fiancée Paris Neill and her brother Garrison Neill.

A recent visit saw Seidman and Neill in the former Albertine Tea Room, which had been cleaned up and ready for its makeover.

It is a measured approach to re-do of the Columns, emphasizing that this isn’t a renovation in which the building is gutted, but more of a reimagining.  “We want to embrace the design,” said Seidman. “To take people out of the ordinary.”

One of the changes people see right away is the entrance: in the past, guests would enter via a central walkway flanked by greenery. The new entrance has moved to the side with the greenery and walkway replaced with a brick patio. This allowed a more controlled flow into the building, and more outdoor seating.

There are a few other changes out front – from improved lighting to a bar station on the porch. 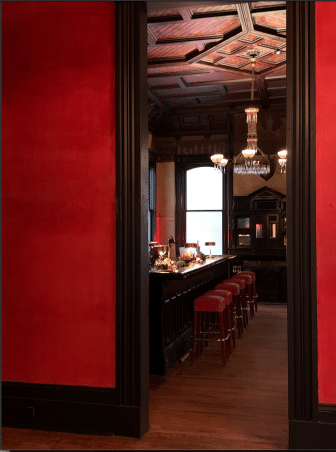 The building has gotten a deep cleaning inside and out, including the bar and the room’s coffered ceiling as well as the stained glass ceiling above the stairwell. Walls have been repainted, with one of the most stunning being the first-floor hallway, painted in what looks like a Venetian red, a painstaking process of applying nine different colors to create the effect, Seidman said.

Some changes are obvious, like the furniture in the ballroom, creating a lounge area, harkening to its original purpose as a parlor, and the first-floor bathrooms (a very welcome re-do). A room off of the front desk, which was originally used as a business center, is being turned into an area for private dining.

Other alterations are so organic that visitors would not notice the difference.

“It is not supposed to feel different,” said Seidman. “The changes are not obvious, but you notice that something is different, but not sure what it is.”

One of those subtle changes happened at the bar. Seidman added 8½ inches to the bar top, so seats can now fit underneath. He also installed a new check-in desk and a POS niche by the bar, so the wait staff isn’t crowded together while processing patrons’ tabs. A new security system has been installed.

The renovated Columns was only open two months when the coronavirus pandemic hit. But it has allowed Seidman to do things he may not have been able to do before, such as hire out-of-work movie lighting designers and have a team of artisans live at the Columns while they worked.

In mid-November, the second-floor rooms – 20 in total — were in the process of their own makeover, with every week something new being revealed in the process, such as the original tile in what was thought to be the master bedroom when Hernsheim had the house built.

Taste of things to come 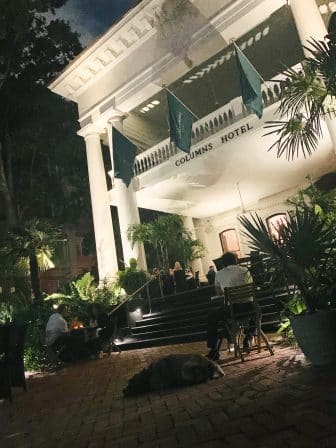 Another new addition is food by chef Michael Stoltzfus of Coquette.

Most people associate the Columns with a being bar, he said, adding “we would love for people to have a drink and a snack, but can come for a meal, too.”

“When we first started talking about food, we wanted take some classic New Orleans and Southern dishes and present them in a classic way, but with a Coquette twist on it,” said Stoltzfus.

“The ham plate is indicative of what we are trying to do here,” Stoltzfus said. “It is Broadbent Ham from Kentucky and pimento cheese served with shrimp chips, which brings in some Vietnamese influence.”

A favorite of Stoltzfus is the hamburger, which is large house-made hamburger patty mixed with a little Andouille, “to give it a sense of place,” said Stoltzfus. “Just subtle enough, but you can pick the flavor up.”

And like the building, the menu will evolve as time goes on.

“The Columns is the beginning of a new era,” said Seidman. “One that gracefully blends the past, present and future.”

4 thoughts on “Glowing up with the Columns: Rejuvenation is a natural progression for this storied gathering place”