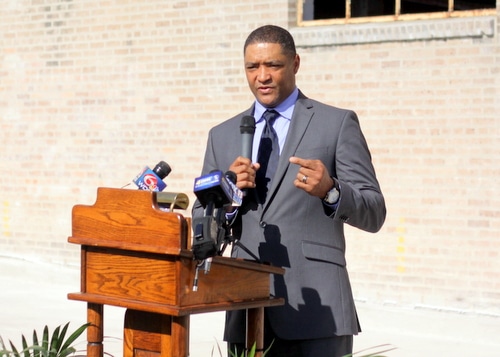 For months now rumors have been building that U.S. Rep. Cedric Richmond will join President-elect Joe Biden’s new administration in an executive capacity. Though Biden has yet to make a formal announcement, many candidates are already lining up for what will surely be a fierce competition to replace Richmond in Louisiana’s 2nd Congressional District.

Since last week’s election, a new poll has been conducted by John Anzalone, Biden’s pollster, that looked at five candidates already considered to be the prime contenders – former Mayor Mitch Landrieu, City Councilwoman at-large Helena Moreno, state Sen. Troy Carter, state Sen. Cleo Fields and state Sen. Karen Carter Peterson. Any of these candidates would be considered serious players in a district stretches from Orleans Parish through Jefferson and up the River Parishes ending in Baton Rouge.

Not surprisingly, former Mayor Mitch Landrieu, now a CNN contributor, ranked first in the poll with 25%. Landrieu served four terms as a state legislator as well as two terms each as mayor and lieutenant governor. He has done an excellent job of staying in the national spotlight in part through the racial reconciliation nonprofit that he founded, E Pluribus Unum.

Landrieu probably would prefer to be a Cabinet member, as was his father under President Jimmy Carter. Perhaps going to Congress would be a good consolation prize. Surely Landrieu would be more open about his diverse racial heritage if he made the race.

Based on her previous visibility as a television reporter and her thirst for public service, Councilwoman Helena Moreno was the second choice of those polled, with 18%. She initially ran for the same congressional seat in 2008, in the election ultimately won by Joseph Cao. Moreno went on to serve at the Louisiana Legislature, where she quickly made friends across the aisle and developed a strong following for numerous legislation benefiting women and children.

A native of Veracruz, Mexico, Moreno has been an extremely popular City Council member who could easily rise to mayor if she chose. As a candidate for Congress, Moreno could draw on her Latina roots and her years of service at the White House under first lady Hillary Clinton. The Clintons could also help Moreno raise funds for the campaign, which is expected to cost $500,000.

Third place finisher Troy Carter, with 15%, was also a candidate in that same 2008 congressional race. The chairman of the Louisiana Legislature’s Democratic Caucus, Carter served two terms on the City Council as well as several years in the Louisiana House of Representatives. Extremely popular in his Algiers community and in Jefferson Parish, Carter has been the go-to legislator for the region.

Even when Carter was out of office, he had the unique ability to stay in touch with his constituents through events like his annual Thanksgiving Dinner for seniors, now in its 28th year. It will be held in a socially distanced environment at Alice Harte Elementary School on Saturday, Nov. 21.

The potential congressional candidacy of Cleo Fields, who placed fourth in the poll, with 14%, should not be taken lightly. Though Fields might not be a household name to all the voters in Orleans Parish, he has a local donor base and is beloved in the eastern part of the congressional district.  A member of Congress from 1993 to 1997, Fields ran unsuccessfully for governor of Louisiana. He is currently serving his third term (non-consecutive) in the State Senate.

Though state Sen. Karen Carter Peterson placed fifth (4%) among the potential candidates surveyed, she too has longed to make a permanent move to Washington, D.C.  She first got a taste of national politics when she attended Howard University. A former chair of the Louisiana Democratic Party and current vice chair of the Democratic National Committee, Carter ran for Congress unsuccessfully in 2006. She was able to attract a diverse group of donors, which would be valuable in this race.

Perhaps Carter is waging the most vigorous campaign to date. According to sources, Carter is making calls to line up support and counting on endorsements from nationally prominent Democrats, including Donna Brazile and Stacy Abrams. Carter will also count on Mayor LaToya Cantrell and her Action New Orleans PAC.

The big questions remains which candidate would attract Richmond’s support. Richmond has close ties to several of the pocandidates. Fields helped coach Richmond when he was first a candidate Congress. Carter has been part of Richmond’s extended family for years. Moreno is one of his closest allies in the white community.

No matter what official role Richmond plays in the new administration, he will be the go-to person for Louisiana residents and Black voters across the country who are anxiously awaiting Biden to live up to their expectations.

Danae Columbus, has had a 30-year career in politics and public relations, including stints at City Hall, the Dock Board and the Orleans Parish School Board and former clients such as District Attorney Leon Cannizzaro, City Councilman Jared Brossett, City Councilwoman at-large Helena Moreno, Foster Campbell, former Lt. Gov. Jay Dardenne, former Sheriff Charles Foti and former City Councilwomen Stacy Head and Cynthia Hedge-Morrell. She is a member of the Democratic Parish Executive Committee. Columbus can be reached at swampednola@gmail.com.

2 thoughts on “Viewpoint: Who would succeed Cedric Richmond if he leaves Congress for the White House?”