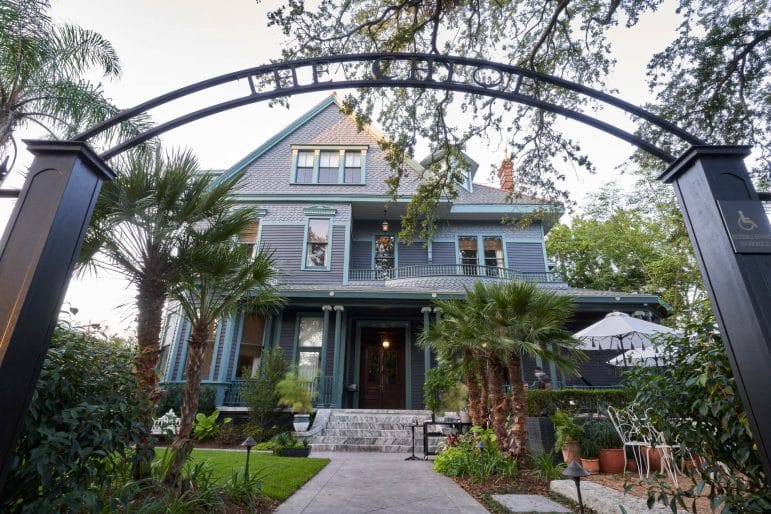 For those driving or walking on St. Charles Avenue, watching the transformation of a large Queen Anne style home near Napoleon Avenue has been the talk of the town.

And like many buildings, it has stories to tell.

On Oct. 28, The Chloe, a boutique hotel with a restaurant and bar, officially opened its doors, becoming the latest resident in this once-upon-a-time sleeping beauty at 4125 St. Charles Ave.

The date is important to note: It’s the same day Hurricane Zeta hit New Orleans. It was like the gods were giving the developers one last obstacle to keep them on their toes.

In May 2018, LeBlanc + Smith, the group that owns Sylvain, Longway Tavern, Cavan and Barrel Proof, purchased the building, then the Avenue Inn Bed and Breakfast, from Bebe and Joe Rabhan, who rescued and restored the then-crumbling mansion decades ago.

“Most people who come to New Orleans usually stay in the French Quarter and the CBD. We want guests to be able to come and stay here in Uptown,” said Robert LeBlanc of LeBlanc + Smith, “and give them a slightly different wrinkle to the city and kind of refresh their experience with it.”

That’s not to say LeBlanc didn’t already have a dream of opening a hotel. “Even as a child, I always knew at some point I wanted to get into a hotel,” he said.

The renovation was led by Kemper Construction, which did the renovations on Cavan and Longway Tavern, both in historic buildings. Kemper is owned by LeBlanc’s uncle, but he said that was not the reason the company was hired: “They have experience with historic properties, and that’s what matters,” said LeBlanc.

While dealing with the surprises that old buildings in New Orleans often have, the hotel was set to open April 2020, but COVID-19 restrictions at that time didn’t allow them to do so.

Among the team members hard at work was New Orleans designer Sara Ruffin Costello, who was brought in to collaborate with LeBlanc on the interiors. They showcase her sophisticated style, one that’s often highlighted by witty and unexpected details.

Her inspirations: “Clubhouses in London, Bloomsbury group images and Biba in London,” said Ruffin Costello in an email, creating “a communal destination for artists, writers, entrepreneurs and their patrons, and anyone else who needs a place to grab a drink and work for a bit or eat with friends.”

The public areas each have a flair, starting with the front-yard landscaping, a collaboration by John D. Gray and Kim Alvarez. The downriver side has two-tiered eating and drinking terraces separated by a short brick planter with a box hedge, giving a privacy for those who are having a meal or cocktails. The uptown side was kept as a lawn. Add in the large front porch, a typical feature of a Queen Anne style residence, and it is perfect viewing of the St. Charles Avenue streetcar and Mardi Gras parades. 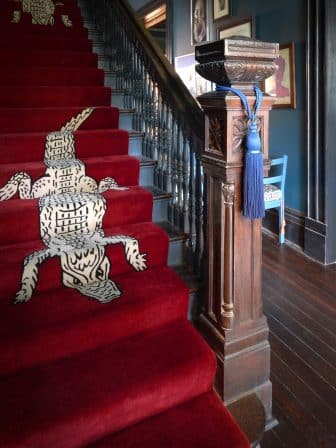 Upon entering, there are two things people notice immediately: the alligator embellished red rug runner by the Rug Company on the staircase – already a favorite spot for photos – and the fact that the décor isn’t Victorian cosplay but more of an appreciation of the era.

“The idea was to springboard off of Thomas Sully’s architecture and given set of conditions – tile, moldings and layout – and pull it all into the 21st century with contemporary art,” said Ruffin Costello. “The house naturally had a lot of hidden rooms that lent themselves to special applications like trellis, which feels so Southern, and wallpaper murals.”

Among Ruffin Costello’s favorite spaces is the trellis room with a dining table for private dinners. It was a space that was originally a closet and half bathroom. LeBlanc remarked on how impressed he was that Ruffin Costello looked at the hotel’s unusual spaces and could turn them into rooms with their own personalities.

“We really had to solve specific details for each space,” said Ruffin Costello, “as they are so different.” 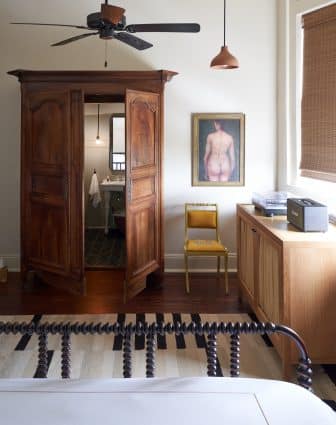 This also goes for the 14 guest rooms. Each has distinctive touches, some of them based on the way the rooms were laid out, including one room that has a hallway leading to a sunroom with daybeds — LeBlanc also emphasized the great natural light throughout the hotel — while three rooms have a “wardrobe” that leads into the bathrooms, a sort of “The Lion, the Witch and the Wardrobe,” though instead of a winter paradise, guests are indulged with an elegant bathroom.

A distinctly New Orleans touch is that every room has a record player and special vinyl compilations made by Peaches Records, nearby on Magazine Street. Each record is a different compilation of great New Orleans musicians and songs, or by those influenced by the New Orleans muse.

Throughout the hotel is an art collection curated by Ruffin Costello’s husband, Paul Costello, a photographer, including pieces by him and locals such as John Isiah Walton, Dawn DeDeaux and Lee Crum, in addition to pieces by Richard Prince, Agnes Martin, Cindy Sherman, Yousuf Karsh, David Hockney, Ellsworth Kelly and others well known or anonymous.

Another piece of art is “secreted” away: a mural in the pool house is by local artist Ann Marie Auricchio. It is in the backyard of the hotel, where there is more seating for cocktails and dining as well as a glistening blue pool. 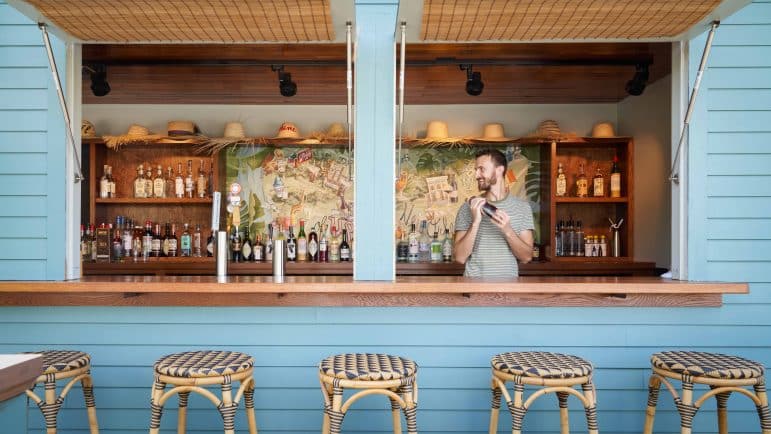 Outdoor spaces that generate a noisy conviviality, like The Chloe pool and bar area, can create a problem in a residential neighborhood. The pool area is adjacent to the backyard of Uptown resident Tracey Moore, a real estate broker at Rêve, who said, “They have been very receptive to anything we asked them.” And in an email she wrote:  “It’s a win, win, if you ask me …. I think it’s great for the area of Uptown to have a boutique hotel and I will more than love having a hotel bar and restaurant to walk to meet clients and friends.”

Jason Sorbet, formerly of Barrel Proof and 21st Amendment at La Louisiane, oversees The Chloe’s cocktail program. His libations are concocted at a beautiful mahogany bar made by Ron Lee of Lee Carpentry, who also made the bars for Cavan and Longway Tavern. It is located centrally in the first floor in the former inn’s dining room, which has the original oak paneling and coffered ceilings.

The hotel’s restaurant will serve cuisine by chef Todd Pulsinelli, formerly of August, Domenica and Warbucks, who created a menu that is “seasonal, fresh and approachable. I want it to appeal to everyone,” he said in an email.

While the seasons will dictate the menu, such as the red snapper with barbecue shrimp, he is “open to figuring out the standards as we go,” said Pulsinelli. Among the items are the chicken katsu sandwich and their version of the classic burger. 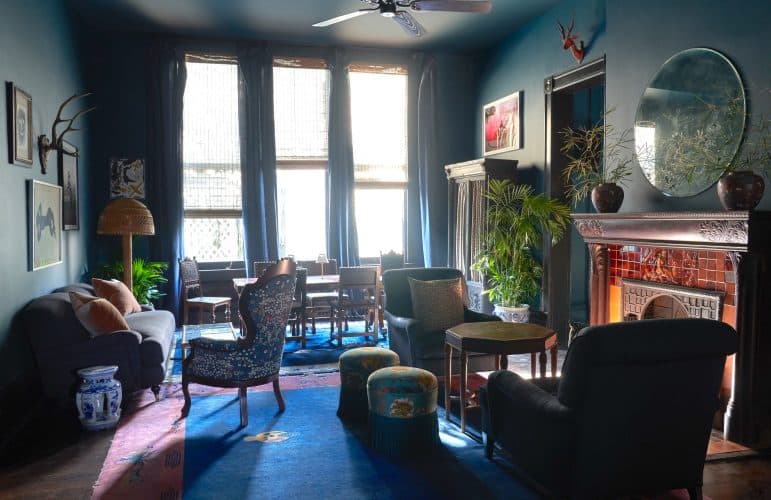 The Chloe’s journey started in 1891, when Henry Picard, a wealthy merchant, enlisted renowned architect Thomas Sully to design and builder L.C. LeCorgne to construct a  showplace for himself and his family.

When Picard passed away in 1902, Moise Waldhorn purchased it. Waldhorn was a self-made man, emigrating in the 1870s from Alsace-Lorraine, then a German province. By the time the house on St. Charles Avenue was constructed, Waldhorn had founded an antiques business on Royal Street, where it continues to operate as Waldhorn & Adler Antiques.

Waldhorn became terminally ill and committed suicide in the French Quarter in 1910. The family lived at the home on St. Charles Avenue until 1919.

Before the Rabhans renovated the house into the Avenue Bed and Breakfast in the early 2000s, the building was a boarding house from roughly the early-1950s through the 1990s. Owned by Jean Ellison, among its residents were college students, World War II veterans and some of Ellison’s family from her native Kentucky.

Ellison’s goddaughter, Natalie Juneau, lived there with her mom in the mid-1990s when she was in middle school. She remembers it as “pretty run-down” and overrun by Ellison’s cats – “Twenty is a conservative estimate,” said Juneau. But it was still a grand house on St. Charles Avenue, and even better for a preteen, it had Mardi Gras parades rolling in front of the house. “A lot of my memories are wrapped up with Mardi Gras,” she said

They lived in an apartment on the first floor, where the dining room is now. The biggest feature in that room are the windows that wrap around most of it, which Juneau remembers as imagining the neighbors looking in at night, only for it to be the cats just staring in.

Or quite possibly, it was a ghost cat. According to a story on Ghost City Tours website, spectral felines were seen periodically, and other hauntings allegedly took place: beds shook on the second floor and some weird knocks were heard during a wedding. Juneau recounted that she never experienced anything, but her mother “believed the place was haunted, claiming she talked to a ghost there,” she said. “It was during the 1960s when she lived there, claiming she met and talked to a ghost an old sea captain, and that he was gentleman.”

Juneau, who visited The Chloe recently, is happy the developers kept the integrity of its era. “I think they did a lot to honor the period details, specifically in term of fixtures, as well as the art deco tiles inside and outside on the front porch,” Juneau said, adding that she was afraid they were going to take out the tiles and replace them with newer ones easier to maintain.

“I am happy they saw the charm that it had,” she said. “Miss Jean died 25 years ago, and if she were alive today, I think she would say it looked fabulous.”

For more information on The Chloe, visit www.thechloe.com.

An editing error in this story was corrected on Nov. 17 to reflect that Moise Waldhorn did not die in his French Quarter shop but in another French Quarter building he owned, according to newspaper reports from 1910.