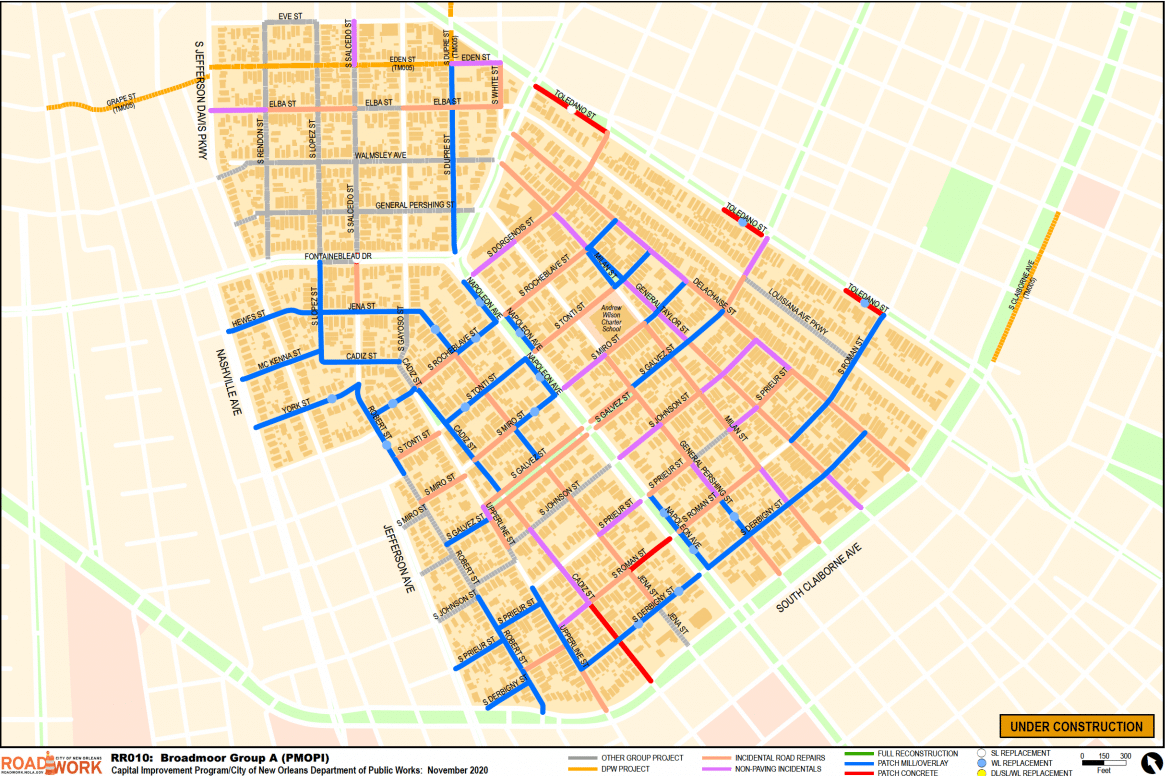 See here for a PDF of this map. (roadworknola.gov)

As part the city’s expansive infrastructure repair program, the Office of Neighborhood Engagement hosted a virtual meeting Tuesday to inform Broadmoor residents on street repair and reconstruction work coming to their neighborhood.

This particular project is called Broadmoor Group A, and work is slated to begin in November. The cost of the project will be $13.6 million.

The project area will be bounded by South Claiborne Avenue, Eve Street and Toledano Street, extending to Nashville Avenue and Jefferson Avenue on the lake side of South Tonti. The work will include some waterline and sewerage line replacements.

However, many of the streets slated for repair will see less intense work as workers will only mill and repave the street, or perform patching on damaged areas. This work will also help to level out areas where streets are sunken.

A map of the planned repairs is available here.

Broadmoor residents attended the meeting online, and some used a call-in number to access the meeting via phone. The presentation not only looked at the project scope, but also outlined safety measures that the construction workers will be taking onsite to prevent the spread of COVID-19, such as daily temperature checks and hand-washing stations. The job sites will have a single point of entry.

Work hours will be 7 a.m. to 5:30 p.m., Monday through Friday, though there is the potential for work hours to be extended to the weekend if necessary. Storms and other weather events may also impact construction work times.

One attendee, Jessica Addison, asked why some blocks that are seemingly in better shape are getting more work than those in worse states of disrepair. Some streets, shown in gray on the project map, may be included in other projects, she was told.

According to RoadWork NOLA, the city is using a 2015 inventory for New Orleans streets as part of the method for organizing the many infrastructure projects.

In 2015, the city completed a block-by-block assessment of street conditions, using a vehicle equipped with “lasers, inertial GPS and high-definition digital imagery.” These tools were then used to assess the profile of the block, which was then given a grade of Excellent, Good, Fair, Poor, Very Poor or Failure. The average rating given to New Orleans street was Poor.

Roadwork NOLA, a capital improvement program with the Department of Public Works and the Sewerage & Water Board, oversees roughly $2.3 billion in infrastructure repair work for New Orleans, with about $2 billion in funding from FEMA. Other funding from the federal Department of Housing and Urban Development, which includes the Gentilly Resilience District projects. Roadwork NOLA also receives funding from the Sewerage & Water Board for the Sewer System Evaluation and Rehabilitation Program (sewer consent decree) projects and from city-funded bond projects.

For more information, visit roadworknola.com. You may also contact Roadwork NOLA at roadwork@nola.gov or by phone at 504-658-ROAD (7623).