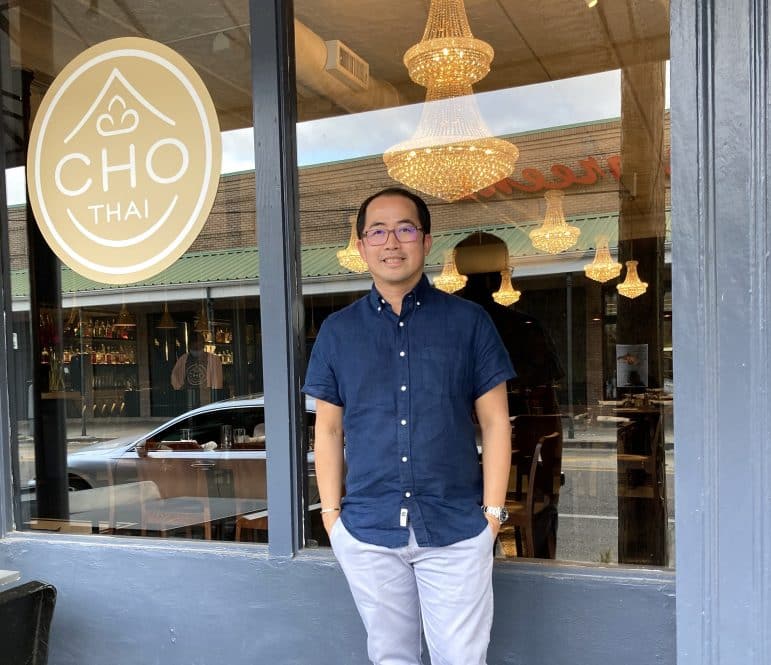 Jimmy Cho, the chef and owner of the Cho Thai — a recent addition to Magazine Street in the Irish Channel — has operated the West Bank favorite Banana Blossom since 2009. One of the repeat customers at that Thai fusion restaurant happened to be a partner at BRG Hospitality, the rebranded John Besh group whose holdings include August, Pizza Domenica and Shaya.

He liked the food at Banana Blossom so much he approached Cho joining the BRG’s restaurants. Cho signed a contract with BRG in November 2019, and the redesign of the interior space at 3218 Magazine St. was set to begin in the new year.

The new interior design is open and spacious, with deep blue walls offset by yellow graphics with chrysanthemums and rows of glimmering chandeliers. There have been several restaurants in this space. Another BRG restaurant, Warbucks, spent eight months at the location before closing last summer. At the time, a BRG partner told restaurant writer Ian McNulty the group was developing a new concept for the space.

That turned out to be Cho Thai, which had been scheduled for an April 2020 opening. The original timetable – before the pandemic – was to begin in January to redesign the space, staff up, and purchase equipment and supplies for the April opening.

That was before supply chains were interrupted and quantities of available restaurant equipment and seafood were down. And then there were the shutdowns, the changing regulations, reduced seating capacities and other restrictions to contain the coronavirus spread. “Our general manager, Kayla Himel, keeps an eye on all that for us,” Cho said.

Cho Thai started carry-out on June 17 and opened for limited dine-in service a month later. “We just go with the flow,” Cho added. For example, while bar seating is not allowed, tables and chairs have been moved into that space to allow more space between tables.

Like Warbucks before it, Cho Thai takes comfort food for a spin, only this is the Asian version of comfort food. The restaurant offers versions of the street food Cho, a native of Sakon Nakhon in northeastern Thailand, remembers from his childhood. “My mother has a noodle shop where I grew up, so I was always around food and cooking,” he said. “And I collected recipes in my travels.”

He takes Thai standards like Pad Thai and adapts them to local tastes. His Grilled Shrimp Pad Thai, for example, is presented with whole shrimp, heads on, the way we like shrimp in Louisiana. “This dish would never look like that in Thailand!” Cho said.

Although his family operated a noodle cart and grocery in Thailand, he did not plan a career in food. He came to New Orleans in 2001 to improve his English after working for Malaysian Airlines. He enrolled in the hospitality program at Delgado Community College, but then switched to a surgery tech major. That career proved to be too stressful, so he got a job in a restaurant to pay the bills. During that time he had a realization: “I can cook.”

Cho Thai is a more upscale version of the West Bank restaurant and has more specialized equipment to create distinctive dishes, such as the short ribs served with Chiang Mai Noodles. Chef Cho is enthusiastic when talking about his dishes, which have a number of influences. 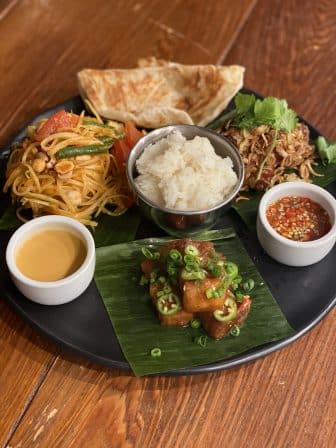 He incorporates local fish and seafood, especially crab, into several dishes. For example, in season there will always be a soft-shell crab dish. The beef is locally sourced Wagyu, from a Japanese breed of cattle, and local flowers find their way as garnish. Signature dishes include sticky rice and fried chicken, crab claws and roti and the traditional papaya salad that, yes, has crab.

There is an impressive array of “Night Market” offerings on the menu — dishes inspired by the markets in Thailand. Thailand’s open air markets have night hours because of the hot climate. There, people come out to socialize and enjoy themselves as well as shop. Prepared food is sold on small plates, so shoppers can buy plates to-go, walking and talking as they eat. Chef Cho points out his “Cho Thai Sampler” on the Night Market menu as a  way to get an authentic taste of this experience. Night Market items comprise the food on the discounted happy hour menu.

And this leads to the cocktails and wines at Cho Thai. Like the food, most of the featured cocktails have a twist. Lemongrass, coconut milk, Thai basil and chili are ingredients found in these exotic drinks. Butterfly pea flowers are used liberally in many of the drinks for taste and to change the color. There is also an interesting array of non-alcoholic drinks and juices.

Himel, Cho Thai’s general manager, spent a lot of time researching cocktails, beverages and wines to pair with the distinctive palate of the Cho Thai dishes. “I really wanted to capture the flavors that we wanted to sit alongside the delicious Thai food we were preparing to serve,” she said.

After much trial and error, she and the head bartender, Lauren Fraiche, came up with the drink recipes for the cocktail menu.

“The wine list is always a work in progress. I strive to keep the list small as well as [to offer] wines that really bring out the flavor profile of the food,” Himel said. “We pride ourselves on having a list that you won’t be able to find in a grocery store and making it unlike an experience you can find elsewhere.”