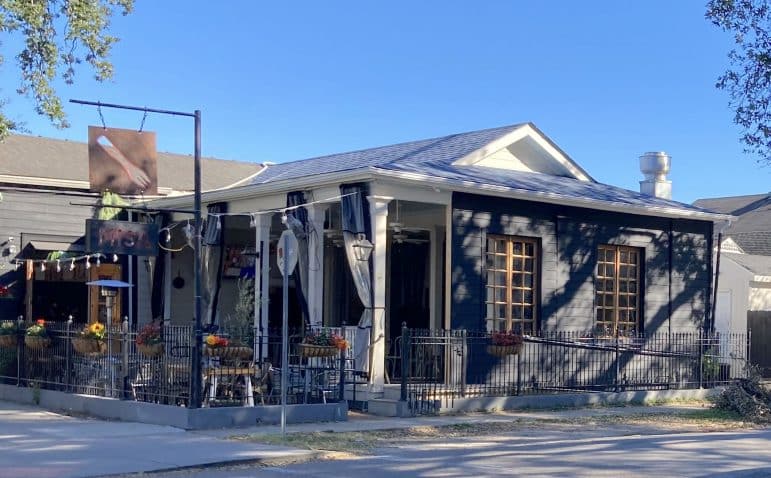 Things got off to a very confusing start in the early days of the COVID-19 pandemic for Tal Sharon. His restaurant, Tal’s Hummus, on the corner of Magazine and Bordeaux, specializes in Israeli street food, and like other business, it went through a period of turmoil.

After the pandemic hit, things were unclear from all perspectives – from the supply chain to the regulations to the customers. And then there was the instituting of all the protective equipment and protocols to keep both employees and the public safe.

“After two or three weeks, things normalized to the point that we were able to at least survive – to keep our doors open and keep our employees,” said chef and owner Sharon (pronounced Sharr-rhone).

Anyone driving past the small corner place where Tal’s Hummus is located can see that its popularity does not seem to have waned during this unprecedented time. There are always people waiting for carry-out or ordering at the walk-up window. And lately, reduced occupancy inside. Things are not ideal, but the quick-service eatery is progressing in the right direction.

And then a new opportunity fell into Sharon’s lap. The Tal’s Hummus landlord also owns the building where the relatively new bistro Bordeaux was located. When it was clear – early on in the pandemic crisis — that Bordeaux was not going to continue operating, the owner offered the space to Sharon. The lease was signed in August and by late September, the new restaurant opened.

Open a restaurant in the middle of a pandemic? It’s a challenge just to keep up with the latest restrictions and rules. But Tal Sharon was not deterred. So he went about the business of changing the design and ambiance of the former Bordeaux space, and the restaurant Misa was born. 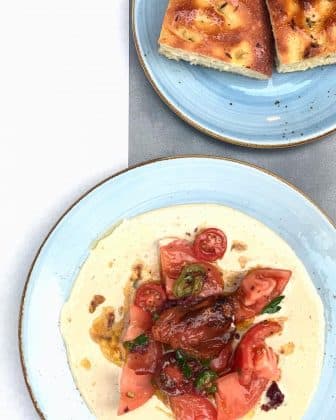 Lemony tahini and spicy tomato salad at Misa (via Facebook)

What was Chef Tal’s inspiration and where are the recipes from? Fortunately, there’s the staple falafel and a few other items Tal’s Hummus lovers are familiar with, but it departs from there to what chef calls “global Mediterranean.” There’s Indian, Italian, French, Moroccan and a selection of grilled meats.

Over delicious Moroccan Frena bread, Sharon talked about his Libyan grandmother, Misa, who was, he says, “an amazing cook.” So he honored her memory by naming the restaurant after her. There will be recipes from her kitchen, such as mafrum, an eggplant stuffed with meat, served with North African couscous. The new restaurant will have a daily special and a menu changing with the seasons.

But most of the recipes the chef has collected himself over his long connection to food and cooking. “My grandmother didn’t teach me to cook, but she taught me to eat,” Sharon said.

He began cooking at age 12 or 13, to earn money to buy a surfboard. And luckily, in his last of two years in the Israeli army he was given the what was considered the assignment of last resort: cooking. Then he got serious, attended culinary school and worked in a number of good restaurants in Tel Aviv. He was the chef at his own place for seven years, until the bombings on Sept. 11, 2001, made things difficult. Sharon then moved to Santa Teresa Maipaís on the Pacific coast of Costa Rica to take up cooking and his other passion, surfing.

After 14 years, that town began to feel too small, and through customers he met from New York City, he was able to move there and begin cooking. But the winter was too much for someone who grew up in a temperate climate, and Sharon connected with a French Quarter restaurateur he had met in Costa Rica. He relocated to New Orleans and worked as a pastry and dessert chef at Doris Metropolitan.

Sharon was missing flavors from his native Israel, and incentivized by the birth of his daughter, he opened Tal’s Hummus at 4800 Magazine St. It will celebrate its fifth anniversary this coming March.

And then came Misa. Everything is sourced fresh and from what’s available any given day on the market. Tal is planning a “meatless Monday” and some upcoming special things for the holidays.

The bartender, Autumn Weiner, designed the cocktail program using all fresh juices and ingredients and homemade shrubs. “There is a definite tropical flavor,” Weiner said. “And we serve local beers and in selecting the wines, we favor organic and natural wines, including some from Israel.”

Although the menu will be changing, Sharon said “all of my signature dishes will always remain: the Moroccan Frena bread, served with lima bean and tahini; hamburger buns with a tomato slice baked in the top; my favorite desserts; and tuna crudo. Always look for a pasta dish.”

The restaurant comprises an outdoor patio, an open-air indoor space and a front room on the ground level. And upstairs, there is an exotic private function room that Tal calls his Bedouin VIP room. It is cosy, with pillows on the floor, low tables and Moroccan lights casting shadows on the walls. And fabric is swaged, creating the effect of entering a tent. Clients in this room may order from the menu or customize their own food choices.