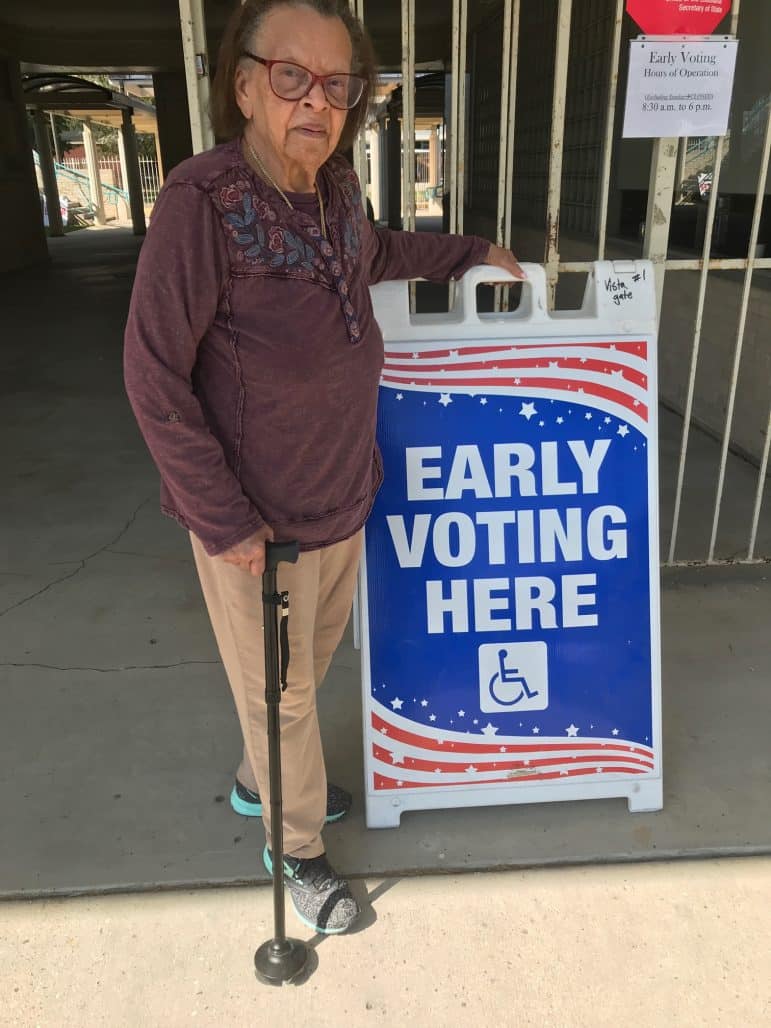 “There is something special about going to the polls to vote,” said Olga Pedesclaux, 96. “It gives me the feeling that I am really part of the process and that my vote counts.” (Danae Columbus)

Although Olga J. Hedge Pedesclaux was born after women earned the right to vote, as a Black female, she faced down intimidation registering to vote in the 1940s. “They didn’t want us voting and threw all kinds of barriers in the way,” said Pedesclaux, a 96-year-old Donaldsonville native now living in Gentilly.

The mother of former City Councilwoman Cynthia Hedge-Morrell, Pedesclaux remembers that it took several trips to New Orleans City Hall to finally get registered. On her first attempt, officials asked Pedesclaux, then 20, to recite the entire Preamble to the Constitution of the United States.

Pedesclaux forgot to wear her wedding ring on her second try and was rejected for lying about her marital status. On the third attempt, she brought along the neighborhood ward boss, who simply stood in the back of the room while Pesdesclaux successfully completed the necessary paperwork.

Because of the intimidation she encountered just to get registered, Pedesclaux considers voting a sacred honor. “There is no reason anybody shouldn’t vote in every election,” she said.

Although Pedesclaux is eligible to vote by mail, she prefers to cast her ballot in person during the early voting period.  “There is something special about going to the polls to vote,” she said. “It gives me the feeling that I am really part of the process and that my vote counts. Voting early is also safer; it helps me avoid crowds.”

With the Election Day less than five weeks away, citizens interested in participating should be considering how, when and where they are going to vote — by mail, in person during early voting or on Election Day.

Individuals who may have moved or not voted in recent years should check their registration to ensure they are still on the rolls. Those who plan on voting on Election Day might want to double check the address of their voting precinct to avoid any potential confusion; precinct locations occasionally change.

For those not yet signed up, Monday, Oct. 5, is the deadline for registering to vote by mail or in person at the Registrar of Voters Office at City Hall.  Online registration continues through Tuesday, Oct. 13.

It is not too early to request a mail-in ballot through the Louisiana Secretary of State. Louisiana is one of four states that still requires an excuse to receive a mail in ballot. Reasons for acceptable excuses, especially this year with COVID-19, are plentiful.

The COVID-19 pandemic has added additional reasons a person can receive a mail-in ballot including if the voter is at a higher risk for contracting the disease due to underlying medical conditions, is subject to a medically necessary quarantine or isolation order, has been advised by a care provider to self-quarantine, or is experiencing COVID-19 symptoms and seeking a medical diagnosis. Historically, mail-in ballots have been a safe and secure way to vote in Louisiana.

Once a voter submits a mail-in ballot, it can be tracked through the Secretary of State’s website to ensure it has been received. If a voter believes the mail-in ballot was lost, he or she can verify the status of the ballot at their normal precinct on Election Day and vote in person if necessary.

Early voting is scheduled from Friday, Oct. 16, through Tuesday, Oct. 27 (except Sundays. Oct. 18 and Oct. 25). Early voting is expected to draw large crowds, especially to the Smoothie King Center, a new early voting location made possible by the New Orleans Pelicans.

Don’t forget to bring voter identification such as a driver’s license or state ID. Provisional ballots will also be available for instances where are questions about a given voter’s eligibility. The questions must be resolved before the vote can count.

Free parking will be available at the Louisiana Superdome. Lines may be long at Smoothie King, especially during peak voting hours and days such as Saturdays Oct. 17 and 24 and the final day of voting, Tuesday Oct. 27.

President Trump continues to claim that he may not accept unfavorable election results and, during Tuesday’s debate, encouraged his supporters to “go into the polls and watch very carefully.” At this time, officials believe Louisiana’s elections will go smoothly. Additional staff and protocols are being put in place to ensure safe and secure elections.

“I have voted in every election since World War II and continue to do so, so that my great-great-grandchildren can enjoy all the liberty and prosperity America offers,” Pedesclaux said. “I dare anybody to silence my vote.”