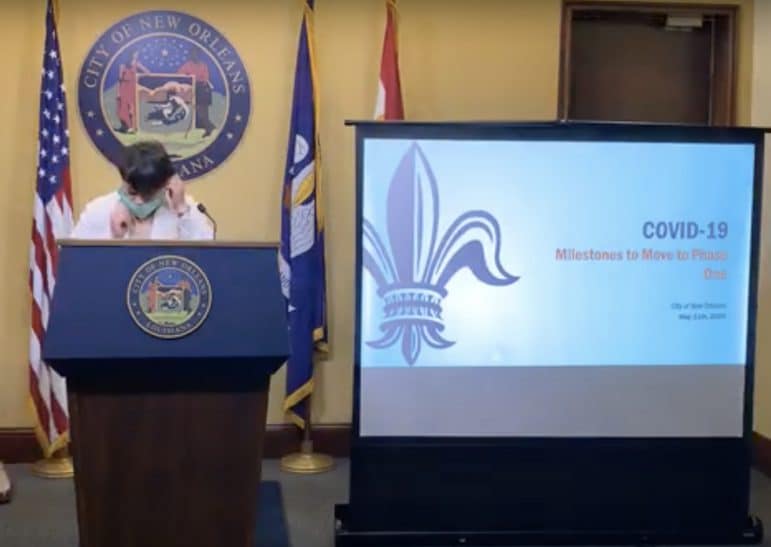 Mayor LaToya Cantrell removes her mask before a press briefing on May 11. (YouTube screen grab)

Although qualifying for New Orleans mayor, City Council and other municipal offices is still eight months away, many of the same conservative business leaders who gave Mayor LaToya Cantrell the seed money that launched her campaign have begun the painstaking search for a new candidate.

“LaToya won’t be mayor much longer,” said one multi-millionaire businessperson who was an enthusiastic early donor. Though many business owners had become disenchanted with Mayor Cantrell, they were willing to work with her for another four years until COVID-19 soured relationships.

“I’m not surprised that the business community is going to put a candidate up against the mayor,” said Ed Chervenak, UNO political scientist. “They are upset that she is not following the lead of Gov. Edwards, who has opened up the state much quicker than Mayor Cantrell has opened up Orleans Parish. The business community wants the city open, and the mayor wants to control the pandemic by keeping things closed.”

The budget in next year’s race for mayor could range upwards of $2 million, according to one consultant who worked the 2017 campaign. During these uncertain economic times, financial support from the city’s deeper-pocketed business leaders will be more important in 2021.

While Councilwoman at-large Helena Moreno’s name is the first that pops up in almost every conversation about new candidates for mayor, Ms. Moreno has not signaled even a remote interest. Extremely popular in all the polls, she has the luxury of running for re-election or may prefer to serve in Washington if Joe Biden is elected president.

Mayor Mitch Landrieu could also throw his hat in the ring but more likely considers a position on Capitol Hill his first priority. Former U.S. Senator Mary Landrieu might also decide that being mayor of New Orleans would be more fulfilling than being a Washington lobbyist.

Candidates on the Nov. 3 ballot who do not win their races might sign on for another run while their name recognition is still high. Councilman at-large Jason Williams could seek the office of mayor if he loses the race for district attorney, or former judges Keva Landrum and Arthur Hunter might do the same. If Piper Griffin does not advance to the Supreme Court, she could run for mayor or for the appeals court. Judge Terri Love has the option of returning to the Fourth Circuit if she loses the Supreme Court race.

Term-limited Councilman Jared Brossett is definitely looking for the next place to land.  Armed with the right fundraising machine, Brossett would be viable. If polling data were to forecast that Mayor Cantrell could not win a second term, Councilman Jay Banks might jump in to avoid another political faction gaining power.

Other seasoned elected officials who could be available include term-limited state Sen. Troy Carter, a previous mayoral candidate and former City Council member, and state Sen. Jimmy Harris.  Insiders believe that Mr. Carter’s first choice is the 2nd Congressional District seat, if it were to become vacant.

While Ms. Landry is definitely a comer, most pundits believe that New Orleans next mayor will be Black. There is also a group of young men whose fathers are well known in business circles including Sean Bruno, Todd McDonald, Jason Burns and Nolan Marshall III. One of them could be tempted to run.

If the Business Council and its new chairman Henry Coaxum decide to field one of their own members, Transdev’s Justin Augustine or Jackson Offshore Operators’s Lee Jackson, who is Coaxum’s partner in the Four Season’s development project, might fit the bill. Businessmen often find the transition from private to public sector a perilous one, as former Mayor Ray Nagin and maybe even President Donald Trump would attest.

Considering the New Orleans Saints’ current problems bringing fans back to the Superdome, Gayle Benson could decide to throw her support behind Mark Romig, a hospitality industry executive and the voice of the Saints. He briefly looked at the race a few years back.

Rebuilding our tourism economy is an imperative for any future mayor.  Former state Rep Walt Leger, now working for New Orleans & Co., would be another good choice.

Any candidate would face an uphill battle. It is a difficult task to defeat an incumbent mayor, Dr. Chervenak notes. “In modern New Orleans history, no incumbent mayor has been denied a second term,” he explained.

Dr. Chervenak also believes that the fortunes of New Orleans could quickly change if Congress approves a new stimulus package that not only takes care of individuals and small businesses but also city governments. “Cities need to be made whole by the federal government,” he said.

In the aftermath of Hurricane Katrina, New Orleans residents and elected leaders banded together to fight for more federal funding to rebuild. Today there is little community consensus. Being an elected official during COVID-19 is not easy. Voter expectations, already high, will only increase as the pandemic gets worse.

A dependable COVID-19 vaccine as well as billions in federal aid could make all the difference in how voters view the performance and re-electability of Mayor Cantrell.  Until then, who in their right mind would want to be the chief executive of a city with a struggling economy, chronic unemployment, an over-abundance of poorly performing schools and a severe lack of affordable housing? New Orleans desperately needs a big fix that our mayor must be able to achieve.