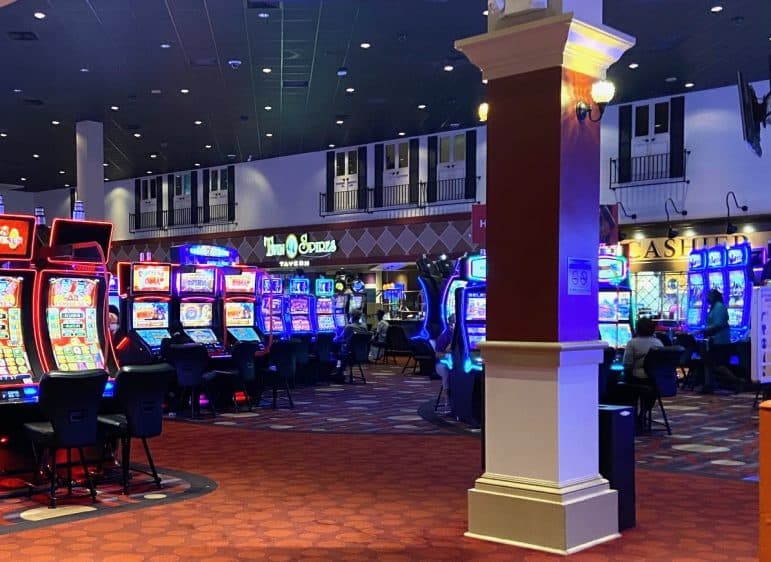 Churchill Downs, the owner of the Fair Grounds Race Course & Slots since 2004, grew from a one race-track company to a publicly traded conglomerate with multiple tracks, casinos and the country’s leading online wagering operation. They offer 800 video poker games at 13 facilities in Louisiana.

Horsemen are puzzled because they know Churchill has the extra barn space needed for Delta’s horses and that it would be compensated for the additional operating expenses. But Churchill would not reap the same profit from horses as online wagering and video poker.

Churchill might think it’s not worth the bother to be a good neighbor in a time of need.

One former Fair Grounds official wonders if Churchill’s reluctance is a sign that it is most interested in income from gaming, and that building up the Fair Grounds’ horse-racing capabilities is not part of their long-range game plan. Some workers on the track’s backside believe rumors that Churchill would prefer to hold this year’s meet — which historically starts Thanksgiving Day — at Louisiana Downs in Bossier City, where COVID-19 restrictions might be easier to navigate.

I grew up in Hot Springs, Arkansas, in the shadow of what is now called the Oaklawn Racing Casino Resort, a track that opened in 1904. I spent many early Saturday mornings in the 1960s watching the horses exercise. It was not uncommon for teens to cut class to bet on a few races in the afternoon. Today with its full-service casino, Oaklawn is Arkansas’ largest tourist destination, which regularly fills area hotels and restaurants during its racing season.

In 1838 Bernard de Marigny and two friends laid out the Louisiana Race Course on Gentilly Road and began racing there. Boxing, baseball games and exhibitions were also held on the site.  The track’s name changed to “Fair Grounds” in 1863 and served as a campground during the Civil and Spanish-American wars. It’s the third oldest racetrack in the country.

Racing was banned in New Orleans in 1908 but came back in 1915. A fire burned down the grandstand in 1919.  After the Louisiana Legislature issued a sanction against racing in 1940, the track was sold to developers who planned to build a subdivision. The following year, a different group of investors bought the site and began racing again after World War II.

Thoroughbred racehorse owner and trainer Louie Roussel III purchased the track in 1977 and made numerous changes that benefited horsemen, the racing industry and on-track fans. In 1988 he led the fight to legalize off-track betting and opened his first off-track betting parlor in St. Bernard Parish. Roussel computerized track operations. He brought national acclaim and prestige to the Fair Grounds as the co-owner of Risen Star, an American champion thoroughbred race horse that won two legs of the Triple Crown.

Roussel partnered with Coca Cola to bring a glitzy Louisiana Derby to the infield that year. He worked with the New Orleans Jazz & Heritage Festival to expand their event. Perhaps his greatest impact was his early campaign to educate track owners that the future of racing was tied to casino gaming.

As casino gaming became legal in many states, track owners parlayed their political connections to receive licenses. More than a few tracks own and operate full-service casinos. Horsemen sometimes earn more at these tracks because purses are based on overall revenue. Local horsemen report that purses are equitable at the Fair Grounds because of special legislation passed decades ago.

In 1990, Roussel sold the New Orleans Fair Grounds to the Krantz family, who oversaw a $27 million rebuilding after the grandstand was destroyed by fire in 1993. A new grandstand and clubhouse opened to the public on Thanksgiving Day 1997.

Churchill Downs supervised the track’s renovations after Hurricane Katrina.  In 2007, a temporary slot-machine gaming facility opened on the grounds, followed by the permanent facility in 2008. During the last decade, Churchill made several infrastructure changes on the Fair Grounds backside, including building a dormitory for workers and improving drainage around the barns.

In 2019 Churchill spent $46 million in a hostile takeover bid to acquire Turfway Park in Florence, Kentucky, 10 miles south of the Ohio River in Cincinnati. At the same time, Churchill committed to a $100 million construction project now underway at Turfway, which includes a new 2,500 seat grandstand, a ballroom area and several drinking emporiums including a bourbon bar.

Would Churchill prefer to sell off the land under the Fair Grounds and just operate the Off Track Betting and video poker facilities?  Only in their dreams. Churchill’s gaming license in Louisiana is directly tied to an 80-day race meet. Their annual OTB and video gaming profits were substantial until COVID-19.  Yet it’s possible that Churchill Downs would consolidate the winter racing season at their new Turfway Park location, which has a larger metropolitan area to draw from and easier access to Louisville.

While winter racing in Kentucky may be a new way for owners and trainers to cut expenses and eliminate mid-year travel, there are several benefits for racing at the Fair Grounds during the winter months. The weather is mild and the ground is rarely frozen which could damage horses’ hooves if running on a cold track. The Fair Grounds race course is exactly one mile long. The final quarter mile stretch is a long straight one that can take a horse’s breath away. A horse that wins at the Fair Grounds can win anywhere.

The horse-racing industry plays a vibrant role in Louisiana’s economy.  Thousands of Louisianians — from breeders, owners, trainers, grooms, hot walkers, cashiers and parking attendants to the folks who sell hay, saddles and bridles – depend on horse racing for their livelihood. “The racing industry has provided a stable income for many Louisiana families for generations,” said one trainer.

Since the State Racing Commission is the primary regulatory body of race tracks in Louisiana, Churchill Downs could end up with the 500 horses from Delta Down whether they like it or not. Between the hurricanes and COVID-19, all of us should be willing to perform a few acts of kindness.